Following are extensive excerpts from Vincent Bugliosi's JFK book concerning the matter of Warren Commission Exhibit #510 and the three spent bullet shells that were found in the Sniper's Nest on November 22nd, 1963: 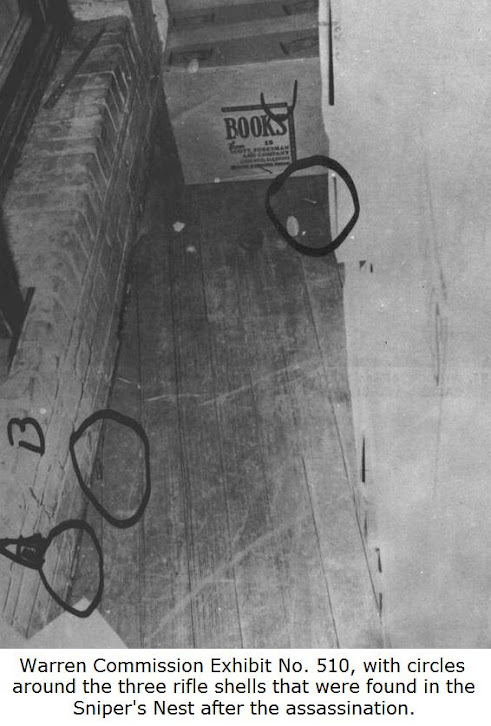 "What perhaps is the strongest evidence against [Deputy Sheriff Luke] Mooney’s contention that [DPD Captain J. Will] Fritz moved the shells before Commission Exhibit Nos. 510 and 512 were taken is that he said that once he discovered the shells he put his head out the window “and called down to Sheriff Decker and Captain Fritz...to send up the crime lab” (Sneed, No More Silence, p.226).

The three empty shells: Conspiracy author Noel Twyman lifted the allegation of planted shells to new levels in his 1997 book Bloody Treason, arguing that only two empty shells were found, not three, proving that at least one bullet had been fired from somewhere other than the sixth-floor sniper’s nest, and therefore, a conspiracy existed to kill the president.

As proof of his charge, Twyman pointed to a Dallas police document published in the Warren Commission volumes which listed a number of items that were turned over to the FBI laboratory on the night of November 22. On the list are two “6.5 spent rounds”; however, the number “2” has been replaced with a handwritten number “3.” (CE 2003, 24 H 260)

The alteration was originally mentioned in J. Gary Shaw and Larry Ray Harris’s 1976 book, Cover-Up, after Shaw and Harris discovered a copy of the unaltered version of the document among the files of the Texas Department of Public Safety (Shaw with Harris, Cover-Up, pp.159–160).

Twyman acknowledged that he originally intended to ignore the handwritten change since it might be explained by a simple correction of an “honest mistake,” but changed his mind when another researcher discovered more “evidence” allegedly supporting Twyman’s theory.

The evidence, per Twyman, had been “buried and suppressed in the National Archives under the guise of national security,” and consisted of two negatives (along with eight prints) showing only two 6.5-millimeter shell casings (and one live 6.5-millimeter round) that had been turned over to the FBI laboratory by the Dallas police on the night of the assassination.

Unbeknownst to his readers, all Twyman had managed to prove was something that has been a well-known and established fact for years: that on the night of November 22 the Dallas police turned over to the FBI only two of the three cartridge cases they had recovered from the sixth floor, along with the live round found in the rifle’s firing chamber.

The third shell (along with Oswald’s wallet, identification, and notebook) was retained by Captain Fritz (who, let’s not forget, was in charge of the investigation at this point) “to be used,” Fritz said, “for comparison tests” since his office was trying to determine where the cartridges had been bought. Fritz kept the shell in his desk drawer until the early morning hours of November 27, when it was turned over to FBI agent James P. Hosty Jr. (7 H 404, WC affidavit of John Will Fritz; CE 2003, 24 H 347)

Still, Twyman had one more “bombshell” to drop on this issue--one that is still making the rounds among neophyte conspiracy buffs. According to Twyman, the Warren Commission, in its absent-mindedness, published photographic proof of the cover-up, proof that had been glossed over by all of the conspiracy theorists before him.

According to Twyman, two photographs, designated by the Warren Commission as Commission Exhibit Nos. 510 and 512 and published in volume 17 of the Warren Commission Hearings and Exhibits (CE 510, 17 H 221; CE 512, 17 H 223), demolished the government’s claim that three empty cartridge cases were found below the sniper’s nest window.

Both photos are multigenerational prints of two Dallas police photographs taken of the spent hulls lying in the sniper’s nest on the afternoon of November 22. Despite the fact that both photographs were shown to Dallas deputy sheriff Luke Mooney, who identified them as photographs of the three empty shells he found (3 H 286–287), Twyman charges that Commission Exhibit No. 510 shows only two empty shells and what “appears to be one [unfired] live round of ammunition,” circled and, he says, erroneously identified as a third shell, shell “A.”

According to Twyman, Exhibit No. 510 wasn’t the only proof of conspiracy that the Warren Commission had managed to accidentally publish for all the world to see. In addition, he tells his readers, the second photo (CE 512) of the three objects beneath the window contains a “crude attempt of forgery.” The conspirators, you see, had attempted to conceal the fact that there were only two empty cartridge cases or shells and one live round of ammunition by darkening the area around the live round, shell “A,” to make it look like a third shell.

How does Twyman explain the buffoonery of the Keystone Cop conspirators he has created? He writes, “Somehow, both the authentic photo and the forged photo slipped through to the Commission. The plotters were human. They were caught in their own web” (Twyman, Bloody Treason, pp.97, 114–115).

As you might have guessed, Twyman’s allegations, based on an unclear, multigenerational copy of the original print, are groundless. He could have saved a lot of paper and ink (and much embarrassment) by taking a look at the original Dallas police crime-lab photographs that Commission Exhibit Nos. 510 and 512 were based on.

What Twyman apparently mistook for a bullet in Exhibit No. 510 is a scrap of paper or debris lying in the crack between the floor and the wall. In Twyman’s fuzzy, multigenerational version of the police photograph, it looked like a bullet sticking out of the end of the empty cartridge case.

Twyman’s additional evidence of forgery in Commission Exhibit No. 512 also turns out to be something far less sensational--an obvious (even in the Warren Commission’s printed version) photographic artifact that doesn’t appear in the original Dallas police prints. In the end, Twyman’s “powerful and persuasive” (Bloody Treason, p.97) proof of fabricated and planted evidence is nothing more than proof of Twyman’s poor research on this issue, although by and large I found him to be a better researcher than most conspiracy authors and theorists.

So what is Twyman’s point? That both Mooney and Day committed perjury and lied under oath, each deciding to become accessories after the fact to the president’s murder? If that’s not what he’s willing to say, then again, what’s his point?

It should be noted that the police photographer, Robert Studebaker, may have taken only one photograph of the interior of the sniper’s nest that showed all three shells on the floor before the boxes were moved to dust for fingerprints, and that’s Studebaker Exhibit A (21 H 643).

John Slate, the Dallas City archivist, told me that the negative for this photo is DMA Negative No. 91-001/081. (The only other photograph Studebaker took before the moving of the boxes [Studebaker Exhibit B, 21 H 644; CE 511, 17 H 222] did not show much of the interior of the sniper’s nest and only picked up two of the three shells.)

What Slate says makes sense in that it is hard to believe that Studebaker only took one photograph that picked up most of the interior of the sniper’s nest before the boxes were moved slightly for the taking of latent fingerprints.

But there is evidence to the contrary, though it is slightly ambiguous, in Studebaker’s testimony before the Warren Commission, where he refers to the “pictures” he took “before they [the boxes] were moved.” When assistant Warren Commission counsel then asks, “You mean [Studebaker] Exhibit A and B?” Studebaker replies, “A and B.” Elsewhere, counsel asks, “Do you have any pictures of the boxes before they were moved other than those you have showed me?” Studebaker replies, “Just those two,” to which counsel says, “Those are Exhibits A and B?” Studebaker doesn’t say counsel is wrong, only answering, “We have probably got one down there I can get you that is a lot better print than that. If you want a better print, I can get it for you.” (7 H 140–141)

REPEATING THIS SEGMENT OF BUGLIOSI'S REMARKS (FOR FURTHER EMPHASIS):

"Both photos [CE510 and CE512] are multigenerational prints of two Dallas police photographs taken of the spent hulls lying in the sniper’s nest ON THE AFTERNOON OF NOVEMBER 22." -- Vincent T. Bugliosi [DVP's added emphasis]