Photos show 2 shells recovered ONLY [in the Sniper's Nest on the 6th Floor of the Book Depository].

And that's due to the fact that Captain Fritz made the decision to keep one of the three shells in his own personal possession at the Dallas Police Department. Hence, it wasn't initially released to the FBI.

And, of course, all of this "FRITZ KEPT ONE SHELL IN HIS OFFICE IN DALLAS" information is easily obtained by merely taking one quick glance at Captain Fritz's official affidavit that he filled out on June 9, 1964:

"Three spent rifle hulls were found under the window in the southeast corner of the 6th floor of the Texas School Book Depository Building, Dallas, Texas, on the afternoon of November 22, 1963. When the officers called me to this window, I asked them not to move the shells nor touch them until Lt. Day of the Dallas Police Department could make pictures of the hulls showing where they fell after being ejected from the rifle.

After the pictures were made, Detective R. M. Sims of the Homicide Bureau, who was assisting in the search of building, brought the three empty hulls to my office. These were delivered to me in my office at the police headquarters. I kept the hulls in an envelope in my possession and later turned them over to C. N. Dhority of the Homicide Bureau and instructed him to take them to Lt. Day of the Identification Bureau.

I told Detective Dhority that after these hulls were checked for prints to leave two of them to be delivered to the FBI and to bring one of them to my office to be used for comparison tests here in the office, as we were trying to find where the cartridges had been bought. When Detective Dhority returned from the Identification Bureau, he returned the one empty hull which I kept in my possession." -- Signed, J.W. Fritz (06/09/64)


Conspiracy kooks, quite naturally, will completely ignore Captain Fritz's perfectly logical explanation regarding the third bullet shell (which Fritz explains in full in his June '64 affidavit).

The kooks, instead, would rather believe that something "sinister", "shady", and "conspiratorial" was involved in connection with that third shell.

Because those two things (in combination with one another) pretty much sink the idea that there were only TWO bullet shells found in the Sniper's Nest (not to mention the June '64 affidavit of Captain Fritz that I discussed above): 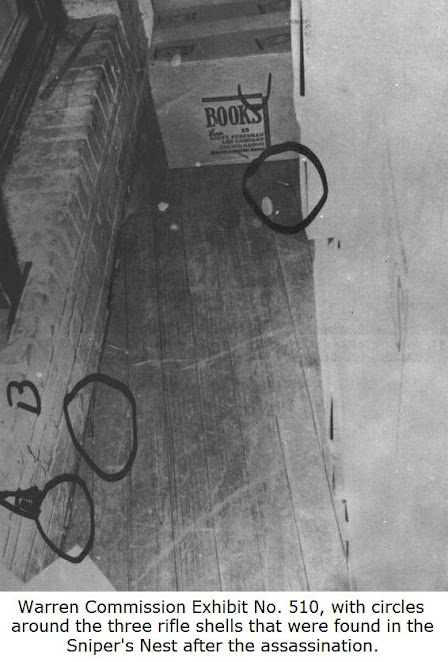 VINCENT T. BUGLIOSI -- "And by 'hulls', you mean cartridge casings?"

BUGLIOSI -- "How many did you hear falling to the floor?"