COMMENTS ABOUT THE RADIO DEBATE BETWEEN JOHN McADAMS AND TOM ROSSLEY ON WHPR-RADIO (HIGHLAND PARK, MICHIGAN) ON APRIL 5, 2009 (EMBEDDED ABOVE):

First off -- great job! Both of you. It was cordial, but still hard-hitting in many spots from both participants. It was really a pleasure to listen to. I enjoyed the whole thing.

And kudos to the host, Anton Batey, who I think did a very good job of moderating and asking some good questions that covered a wide variety of areas. And additional kudos to Anton for also riding the fence very nicely too. He certainly did not show any bias whatsoever toward one side or the other. Excellent job.

The biggest oversight on Professor McAdams' part, IMO, was when the "back and to the left" topic cropped up a couple of times during the debate, with Prof. McAdams not once mentioning the initial FORWARD movement of President Kennedy's head on the Zapruder Film at the critical moment of impact when Oswald's bullet was crashing into the back of JFK's head.

I think that John McAdams would agree that any discussion about the movements of JFK's head during the key head-shot frames of the Zapruder Film should certainly include some remarks about the very important forward movement of the President's head at the critical IMPACT point.

Tom Rossley, who is a conspiracy-loving kook of the very first order, came up with a brand-new crackpot idea regarding Governor John Connally's wounds that I don't think I have ever heard any other conspiracy theorist dish up in the past -- and that's when Tom stated during the WHPR radio debate that Governor Connally had NOT been shot in the back by a bullet at all....but, instead, had been shot in the CHEST from the FRONT by a bullet. And this bullet evidently exited the UPPER BACK of John B. Connally.

Maybe Tom has proposed that nutsville theory here at these Internet forums in the past, but I sure don't recall reading it.

Tom bases his "Connally Was Shot In The Chest" nuttiness on the initial news reports (and some statements by Connally's doctor that Rossley has totally misinterpreted, as per the kook's norm) that said that Connally had, indeed, been shot "in the chest".

But even a first-grader should be able to figure this one out -- it's obvious that the initial "shot in the chest" reports (which were stated on national TV, no doubt about that) were erroneous and were, in large part being based on the area of Connally's body where some witnesses observed the most blood pouring out of the Governor--which was, of course, in his chest.

This "in the chest" nonsense is very similar in nature to the erroneous early reports (like Bill Newman's) which stated that JFK had been shot "in the temple".

Since the temple area at the RIGHT-FRONT of Kennedy's head (the EXIT point for Lee Harvey Oswald's bullet) was the place where witnesses, naturally, saw all of the blood on the President, they incorrectly asserted that Kennedy had been shot IN the "temple" area.

But, quite obvious, Newman nor anyone else in Dealey Plaza could have possibly seen the exact ENTRY HOLE on Kennedy's head to make a conclusive determination about where precisely the point of entry was located on JFK's head.

Back to Connally's "chest" for a moment longer -- It appears then, per Mr. Rossley, that apparently the gunman who fired that bullet into Connally's chest from the front must have been lying on the floorboards of the limousine (seeing as how such a bullet would have been moving UPWARD through Governor Connally's body, per Rossley's impossible theory).

Maybe Brian David Andersen (author of the JFK fantasy book "My God, I'm Hit!") was right after all. Maybe there WAS a secret compartment somewhere in the President's limousine where a midget shooter could hide himself and from where he could have popped up and fired some bullets at Connally and JFK on November 22nd.

And Rossley thinks that Connally's chest wound was SMALLER than his back wound. More fantasy from Conspiracist Tom, I see.

Of course, as we all know, Dr. Shaw (one of Connally's surgeons at Parkland Hospital) appeared on live television within hours of the shooting on 11/22/63 and told the world that Connally had very likely been struck by only "one" bullet, with that bullet positively coming from behind Governor Connally, with the back wound being undeniably a wound of ENTRY, not exit.

For Rossley to go on the radio and actually make the absurd claim that John Connally's chest wound was a wound of ENTRY is beyond ridiculous (given the mountains of evidence indicating just exactly the opposite) -- it's insane.

So, it would seem, Rossley's got Kennedy AND Connally being shot from the front -- a sort of Single-Bullet Theory in reverse -- although Rossley thinks they were hit by separate FRONTAL bullets. And Rossley also has Connally being hit by TWO bullets, which means his anti-SBT theory has to account for FOUR disappearing bullets, in order to replace the SBT's one single bullet.

Another new one that I had never once heard before was when Tom Rossley said that there's evidence of some kind to indicate that Dan Rather of CBS News was in Jack Ruby's Carousel Club on Thursday, November 21st (the night before the assassination), and that Rather saw Lee Oswald together with Ruby that night.

Well, just as I thought, Mr. Rossley has misrepresented the crux and meat of this misunderstanding regarding Dan Rather. It took me just a couple of minutes to clear up this matter in my own mind, via taking a look at Warren Commission Exhibit #2983, which can be seen HERE.

Also -- CE2983 mentions nothing about the exact DATE when DeMar supposedly saw Oswald there, which means Rossley is stretching the truth once again when Tom said that Rather supposedly saw LHO at Ruby's club on 11/21/63.

In addition, CE2983 says absolutely nothing about DeMar (or Rather) having seen Oswald TOGETHER WITH RUBY at any time prior to November 22nd. That exhibit only mentions a potential Oswald sighting, but nothing about Oswald and Ruby being seen TOGETHER at any point in time.

And in Dan Rather's televised interview with Bill DeMar on November 24, 1963, DeMar doesn't mention a thing about Oswald being WITH RUBY when DeMar supposedly saw LHO in the Carousel. In fact, DeMar says exactly the opposite when asked about it by Dan Rather, indicating that Oswald was positively NOT with Ruby in the club.

DeMar merely said that he thought Oswald was "in the audience" during one of DeMar's performances at the Carousel at some point prior to November 22nd.

So, once again, Rossley is stretching the facts to the breaking point to meet his pro-conspiracy requirements. As always.

Another great "Rossley Moment Of Hilarity" during the radio debate was when Tom R. declared that the negative paraffin test result on Lee Harvey Oswald's cheek meant (conclusively!) that Oswald positively did not fire a rifle on November 22, 1963.

Rossley, naturally, totally discounts two critical facts regarding paraffin tests when he declares Oswald to be completely innocent of assassinating JFK based on just the negative paraffin result to LHO's cheek, to wit:

Tom, even though he says otherwise, disregards the fact that paraffin tests are wholly unreliable (as testified to by multiple law enforcement officials after the assassination).

As McAdams explained to Rossley during the radio debate, the main reason that police departments even use the paraffin test at all is mainly for intimidation purposes (at least in circa 1963 at any rate). The police hope they can trick a suspect (although I think Mr. McAdams used the wrong word in the debate when he said "witness" instead of "suspect") into a confession through the use of such a test (and, similarly, with the use of the lie detector test as well).

Plus, as Mr. Rossley should know full well, the FBI did tests with Oswald's Mannlicher-Carcano rifle after the assassination, with an FBI agent being given a paraffin test very shortly after firing multiple shots from CE139 (Oswald's very own rifle), with that test resulting in a "negative" reading for nitrates on BOTH the agent's hands and CHEEK.

Therefore, via such a test conducted by the FBI, we KNOW that a FALSE NEGATIVE is possible. And yet Mr. Rossley has the gall to declare that Oswald never fired a rifle on 11/22/63 based solely on the results of the paraffin test.

And here's another lulu from the lips of Thomas Rossley ---

Tom suggested to the radio audience that Oswald couldn't possibly have used his Italian military Carcano rifle to murder John F. Kennedy in November of 1963 because he had no bullets available to put into his Carcano in November of 1963 (alluding to the silly factoid about how the manufacturing of MC ammunition had been discontinued years prior to 1963)!

How about that, folks?

Of course, to a reasonable person looking into JFK's assassination, it becomes rather obvious that since Oswald purchased his Mannlicher-Carcano rifle from a mail-order firm in Chicago, Illinois, in March of 1963 (Klein's Sporting Goods Co.)....it stands to reason that Klein's Sporting Goods Company was probably not selling rifles to customers if NO AMMUNITION FOR THOSE RIFLES WAS READILY AVAILABLE!

I guess Rossley wants to believe that Klein's was advertising (and selling) WW2 Army surplus Carcano rifles to the public -- but nobody could ever hope to use those rifles because no ammo could be purchased to put into those guns.

But (again) to a reasonable person, a different truth emerges -- i.e., Klein's was selling people Mannlicher-Carcanos via mail-order, so it's quite obvious that ammunition for those Carcanos was certainly available to purchase.

In fact, in the very same magazine ad that Oswald used to purchase his rifle [pictured below], Klein's also offered the ammunition for that rifle (108 rounds for $7.50):

Oswald decided not to spend the extra $7.50 for the bullets when he ordered his rifle and scope from Klein's in March of '63, but it's fairly obvious that Carcano bullets WERE being made available to customers by Klein's in 1963.

Oswald must have purchased his bullets someplace other than Klein's; but if Klein's had the ammo available in 1963, it stands to reason that other places had the bullets for sale as well.

Rossley no doubt disagrees. But such is the way with conspiracy-happy theorists. They'll grasp for any crazy straw they can latch onto, all the while throwing ordinary common sense out the window in the process. 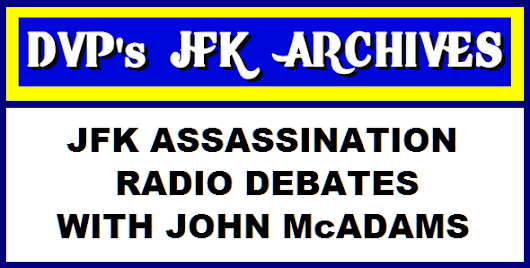