The Klein's employee who originated the idea of mounting a scope on the rifle was Mitchell Westra. He told the House Select Committee on Assassinations (HSCA) that Klein's only mounted the scope on the 36-inch MC [Mannlicher-Carcano].

This whole line of "conspiratorial" thought is just more idiotic claptrap and nonsense coming from CT-Kooks who are desperate to find ANY excuse to exonerate Mr. Oswald.

The common-sense answer to this discrepancy is a simple one:

Since Lee Harvey Oswald DID, in fact, order a "36-inch" rifle, but Klein's shipped Oswald/"Hidell" a 40-inch model,* and since Oswald's order specified that he wanted the scope to be included as part of his order as well, and since it was Klein's policy to mount scopes for customers who ordered both the 36-inch rifle and the scope as a "package" deal....then Klein's simply mounted the scope for Oswald's "package" order as if it were the 36-inch model of the Italian carbine.

After all, it certainly wasn't Oswald's fault that Klein's was out of stock of the 36-inch rifle that he ordered. So why should he be penalized in this instance by NOT having the scope mounted?

Quite obviously, in Oswald's case, Klein's didn't care that they normally didn't mount the scopes on the 40-inch models. Oswald ordered a 36-incher, and his "Rifle With Scope" package order was treated exactly the same as any other "36-inch" order. Thus, the scope was mounted on the 40-incher they mailed to him.

The very same thing probably happened to several other Klein's customers who found themselves also receiving 40-inch Carcano rifles in the mail (instead of the 36-inch varieties they had actually ordered).

Perhaps some of the Anybody-But-Oswald conspiracy kooks should do some additional leg work and try to find another person or two who purchased Carcano rifles from Klein's in 1963 to see if any of them ordered the 36-inch model but received a 40-incher instead.

In addition, the Warren Commission testimony of Klein's Vice-President William Waldman indicates (in no uncertain terms) that the 4X scope that Oswald/Hidell ordered via catalog number C20-T750 was almost certainly mounted by Klein's on the Mannlicher-Carcano rifle (serial #C2766) that was shipped to Lee Oswald's post office box in Dallas, Texas, in March 1963. Here's the pertinent testimony from Waldman in this regard:

WILLIAM J. WALDMAN -- "Our catalog number C20-T750, which was the number indicated on the coupon prepared by A. Hidell, designates a rifle with scope attached. And we would have so shipped it unless the customer specifically specified that he did not wish to have it attached. There is nothing in our records to indicate that there was any request made by the customer, and therefore we would have every reason to believe that it was shipped as a rifle with scope mounted."

* And the most likely reason that Klein's Sporting Goods in Chicago shipped Oswald a forty-inch weapon is pretty obvious too -- Klein's simply ran out of 36-inch Italian carbines and had to substitute a very similar rifle that was four inches longer; Oswald almost certainly never even noticed the difference and undoubtedly couldn't have cared less that he was sent a rifle that was four inches longer than the one he had ordered from the magazine ad. 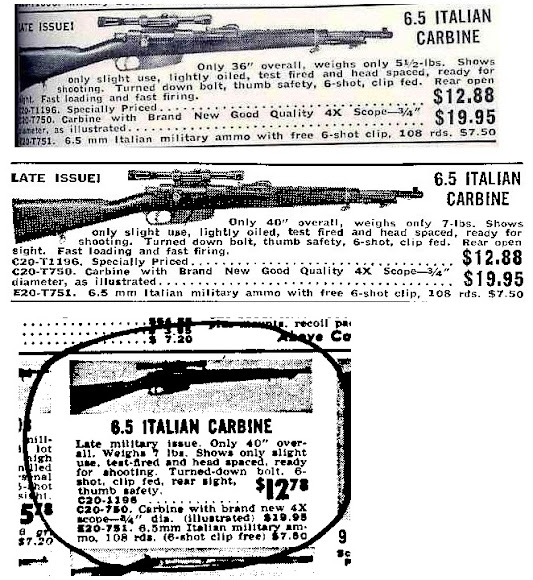 So it doesn't seem unusual or particularly odd to me that a customer (in this case, Lee Oswald) could have possibly received a 40-inch weapon even though he actually ordered a 36-inch model.