You are just being a slave to the "let's not make a fuss" machine, in particular by your unfounded, unjustified use of stereotypical media-friendly "look at me I'm popular" phrases and sound bites like 'KOOK' and 'FRAUD'. You are soooo gullible, and basing those slanderous statements on no solid evidence whatsoever.

Jim Garrison was one of the genuine heroes. You are more biased than I thought you were in the first place, and my complaint/comment was about how you weren't and are still not presenting your videos fairly so the audience can judge for itself.

A person who thinks Jim Garrison was a "hero" thinks I am the "gullible" one. That's quite hilarious (and ironic, to boot).

Tell you what: why not just call me a 'conspiracy theorist'; that'll make you look good in others' eyes rather than view the evidence objectively and make sensible comments instead of just using natty little labels for people who aren't just taken in by political spin and controlled media.

Just ponder for a minute that more people worldwide accept that 22Nov63 was a government conspiracy to remove a president from office via a coup than it was in any way the still-standing official 'story' of events.

So what? If 80% of the world's population believed that water wasn't wet, does that make the water coming out of my kitchen faucet bone dry?

That water thing is a pretty good analogy, because 95% of the people in the world probably have very little knowledge of the details of the JFK murder case.

I'd be willing to bet, in fact, that about 75% of the people who insist a conspiracy existed in the Kennedy assassination wouldn't be able to answer the following question -- Who was J.D. Tippit?

Also, it might interest you to know that one of the most-recent major polls conducted in the United States (in November 2003, by ABC News) reveals an interesting statistic: only 7% of the poll's participants think that Lee Harvey Oswald was "Not Involved" as a gunman in Dealey Plaza, which is in direct opposition to the insane theory espoused by your "hero" named Jim Garrison, who was of the opinion that Oswald didn't shoot anybody on November 22, 1963.

Unlike Garrison and many other members of the "Anybody But Oswald" kook club, 83% of the 1,031 people polled by ABC News in 2003 think that Lee Oswald was firing a gun at President Kennedy in Dallas on 11/22/63: 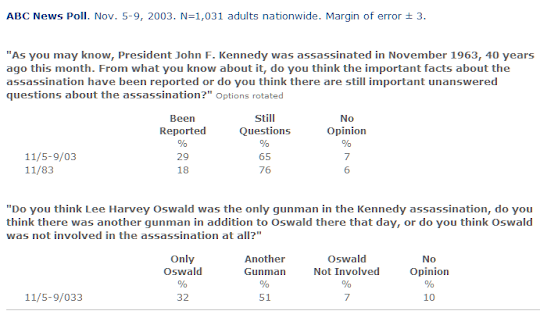 This public opinion which you're choosing to ignore and evidently laugh at, which is favouring the inside job explanation -- and in effect exactly what Jim Garrison (you know, your 'kook') was saying and had concluded over 40 years ago -- has being gaining for decades. They know this LHO / Warren Commission contrived rubbish is what it is, a whitewash.

See my last response, re: most people not knowing any of the details or evidence connected with the murders of John F. Kennedy and J.D. Tippit.

Popular "conspiracies" (like the JFK assassination and 9/11) are almost always totally untrue, and are almost always born out of the "snowball" effect....i.e., a lot more people are likely to jump on the snowballing conspiracy bandwagon, regardless of their personal lack of detailed knowledge about the cases in question.

And this snowball effect has been particularly enormous and unjustifiable in the JFK case, due to a film director named Oliver Stone, who in December 1991 placed on the movie screen three-plus hours of untruths and myths and nonsense (most of it based on the theories of your hero Jim Garrison, who decided to put Clay Shaw on trial in 1969, even though Garrison had to know that Shaw committed no crime whatsoever).

My guess is that about 60% (probably even more) of the people who participate in the various sample polls have obtained the majority of their knowledge about the JFK assassination from the point-of-view of Oliver Stone and Jim Garrison and Stone's ridiculous movie full of lies.

But even though the above paragraph is probably true, we still find that only 7 out of every 100 people in the 2003 ABC News poll were willing to swallow Oliver Stone's and Jim Garrison's "Oswald Didn't Shoot Anybody" tripe.

You are quite obviously oblivious to this and other clear indications that coup d'etats and other political wrong-doings take place, and perhaps place far too much faith in the media. Hence the pity.

Save your pity. The last thing I need is the pity of a Garrison-admiring conspiracy kook.

On a now rather unrelated issue: show me exactly how Garrison is a fraud and a nut.

He was a fraud because he obviously knew that the man he was prosecuting in New Orleans in early 1969 (Clay Shaw) was completely innocent of the charges that he was on trial for (i.e., the bogus charge of "conspiracy to murder John F. Kennedy").

Garrison never even told the jury HOW Clay Shaw was involved in this so-called conspiracy plot to murder Kennedy. Garrison never once laid out ANY EVIDENCE AT ALL of Shaw's guilt. None. Zip!

Now, isn't that enough right there to justify my labelling Garrison a "fraud"? If not, why not?

And how exactly was Garrison a "nut", you ask? Well, just for starters, there are these side-splitting comments made by your "hero", Mr. Garrison. And if these quotes aren't enough to qualify Garrison as a "nut", I don't know what would be:


"Shots were fired at Kennedy from the Depository but also from the grassy knoll and apparently from the Dal-Tex Building as well -- but not one of them was fired by Lee Harvey Oswald, and not one of them from his Mannlicher-Carcano." -- Jim Garrison; 1967


"There is no 'overwhelming' evidence that Oswald shot from the Book Depository. The only evidence available indicates that he did NOT." -- Jim Garrison; January 31, 1968


"There were at least five or six shots fired at the President from front and rear by at least four gunmen, assisted by several accomplices, two of whom probably picked up the cartridges and one of whom created a diversion to draw people's eyes away from the grassy knoll. At this stage of events, Lee Harvey Oswald was no more than a spectator to the assassination." -- Jim Garrison; 1967


"The murder of Tippit, which I am convinced Oswald didn't commit, was clearly designed to set the stage for Oswald's liquidation in the Texas Theater after another anonymous tip-off." -- Jim Garrison; 1967


"The evidence we've uncovered leads us to suspect that two men, neither of whom was Oswald, were the real murderers of Tippit. We believe we have one of them identified." -- Jim Garrison; 1967

Pick your fights carefully, as I could argue you into the ground on this one.

Good luck trying. But you're out of your league. And that's because ALL of the physical evidence tells any reasonable person that the late Jim Garrison was a total nutcase, and that Jim did exactly what every other "Anybody But Oswald" kook does every day of the week -- he chose to completely ignore ALL of the evidence of Oswald's guilt. Just as Oliver Stone has done as well.

In short -- anyone who can still (in 2009) support the lying and the tawdry tactics of Jim Garrison in his case against Clay Shaw is a person who certainly deserves no respect in my book. Picking Garrison as your hero is truly pathetic.

But you're not alone. There are plenty of Garrison-loving fools in the world. James DiEugenio being another really silly one.

Try dismissing all of the evidence linked here. Being the outer-fringe conspiracist you obviously are, I'm sure you'll give it the college try, despite the fact that every bullet, gun, and bullet shell leads straight to your favorite "patsy" named Lee Harvey. But I'm sure all of that stuff was merely faked and manufactured by the good ol' boys down at the DPD and FBI; right?

No evidence, zero, none whatsoever points to Oswald.

Yep, you belong in bed with Garrison alright. Your ilk just loves to ignore the evidence.

Conspiracists will forever ignore the C2766 rifle, the bullet shells, CE399, CE567, CE569, the paper bag, the Tippit murder, the shells at the Tippit murder scene, Oswald's guilty actions after the assassination, the reams of lies told by Oswald after his arrest, Oswald's attempt to kill Officer McDonald in the theater (THAT incident points to LHO's innocence, does it? Please try to wiggle out of that one), etc., etc.

Now, what were you saying about "no evidence" pointing to Oswald?

Go read 'Crossfire' and actually analyze the evidence, NOT how it's reported in the Warren Commission report.

You want me to analyze the JFK case by reading a book written by a guy who thinks the Earth is inhabited by aliens and believes the moon landing was a hoax, etc., instead of going to the book that solved the case the very first year (the Warren Commission Report).

Thanks, but I'll pass on Mr. Marrs' version of events.

I suppose you put a lot of stock in Jim Fetzer's opinions over those of the Warren Commission and the HSCA and the Clark Panel and the Rockefeller Commission too, right? Fetzer is the retard who thinks that the Zapruder Film was "wholly fabricated". He sounds right up your alley, come to think of it.

Can you imagine the ridiculousness of 3 shell casings falling and lying as they allegedly did? Why would there be 3 on the ground anyway...think about it?

You're obviously suggesting the known physical evidence (the three shells in the Sniper's Nest) was planted there by the cops, right?

Let's see you whip up even an ounce of proof to back up such an allegation. Any chance of that happening?

And I'm pretty certain you think that the four shells that Oswald was seen dumping onto the ground on Tenth Street by at least THREE civilian witnesses were "planted" by the police too. Right? Because if those shells aren't bogus too, then your patsy is positively guilty of at least one murder on 11/22/63 -- Officer Tippit's.

Stop now before you make a fool of yourself.

You are so absorbed in 'official' versions you can't see the wood for the trees.

Just because it's "official" doesn't make it wrong, Mr. Conspiracy.

BTW, you also must think that all of the other "official" committees screwed up (and/or lied) regarding the investigation of JFK's death too, correct? Because the HSCA said Oswald was the only gunman who hit anybody with any bullets on November 22nd. So those guys are all rotten "official" crooks too, right?

Try again "sproggledaddy", because so far you aren't exactly digging my grave here. In fact, you haven't even turned over a spadeful of dirt yet.

Allow us all to bask in the CTer's recent hunk of brilliance (worthy of a replay due to its absurdity):