This station [KRLD-Radio] clearly missed it [the initial bulletin of JFK's assassination].

Yes, I'm sorry I was unable to provide the first bulletin concerning the shooting in my lengthy KRLD-Radio series. But the first bulletin just is not there on my copy of KRLD's coverage. And I have no idea why. I can only assume that there was an earlier bulletin (or two) provided by KRLD-Radio, but it is not included in the version I currently possess.

But even without the initial bulletin being included, my KRLD series is still quite fascinating to listen to, mainly for the extended live coverage provided by Bob Huffaker on Main Street just prior to the shooting.

Huffaker was actually on the air live when the shooting occurred just a few blocks west of his position. Bob was located near the intersection of Main & Akard when the assassination took place.

If Huffaker and his mobile unit had been stationed closer to Dealey Plaza, we would possibly have been able to hear the gunshots being fired at President Kennedy. Now THAT would have really been incredible if such a thing would have happened that day in Dallas.

It's just too bad that Mr. Huffaker wasn't stationed at the intersection of Main and Houston Streets that day. 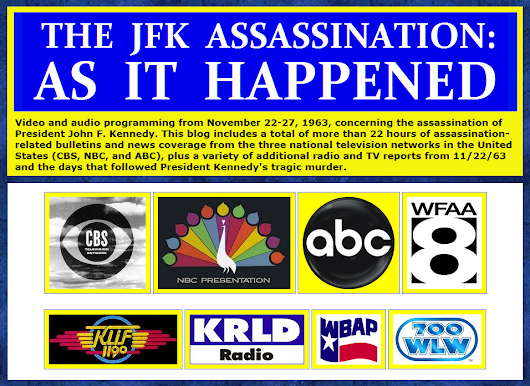