INTERVIEWS WITH HENRY WADE THAT WERE ARRANGED BY JACK RUBY

It's remarkable how much "JFK-related stuff" out there gets lost or buried under a mountain of other things. A good case in point (at least for me personally) cropped up today [July 22, 2014] as I decided to scour some of my older MP3 CDs containing the JFK coverage from various radio stations. I have had this 11/23/63 KLIF material [see the video embedded above] for several years and yet I never used it on my video sites until today.

It's a video I put together which contains two interviews with Dallas D.A. Henry Wade that were aired on KLIF-Radio in Dallas on the morning of November 23, 1963. And both of these interviews were arranged, amazingly, by Jack Ruby, who would thrust himself into the spotlight the very next day by murdering Lee Harvey Oswald.

And Ruby even gets his name mentioned on the air by Russ "The Weird Beard" Knight. Amazing.

The fact that these two interviews with a very important person (the Dallas District Attorney) were both, in large measure, engineered and arranged by Jack Ruby, tends to show just how much Jack liked to be where the action was happening after a big news event.

I'll also add that Ruby really was responsible for THREE separate interviews with Henry Wade being conducted on radio stations during the first 12 hours after JFK was shot, with the third one being Ruby's partial involvement in helping to arrange the WNEW-Radio interview for Ike Pappas at City Hall.

And as if all of the above stuff wasn't impressive enough, Ruby was also apparently responsible for prompting Russ Knight to ask Wade the question about whether or not Wade thought accused Presidential assassin Lee Harvey Oswald was sane or insane. If not for Ruby, it's very likely that Knight wouldn't have asked Henry Wade the Sane or Insane? question. That information was brought out at Ruby's murder trial during the testimony of KLIF's Glenn Duncan [see Duncan Exhibit No. 2 in Warren Commission Volume 19, at 19 H 634].

All in all, a very productive day for self-appointed "reporter" Jacob Leon Rubenstein (aka Jack Ruby).

I remember reading about Ruby's role in [Vincent Bugliosi's book] Four Days in November. It's really cool to hear the interview for the first time. Thanks David.

Right, Michael. Vince Bugliosi does an incredible job of relaying all the information about Jack Ruby's movements and activities on Friday night/Saturday morning (November 22/23), right down to telling the reader the flavors of the soda pop Jack purchased at Phil's Deli -- eight black cherries and two celery tonics. (Celery tonic soft drinks? Sounds terrible, but two people at KLIF ended up drinking them that night.)

I had always wondered, after watching that '78 film, whether the part about Ruby's name being spoken on the air by a KLIF announcer was really true or not. And as it turns out, I had the proof in my very own audio collection for years and either just totally forgot about it or I had somehow overlooked or missed the part where Russ Knight says "on a tip from Jack Ruby" on the KLIF tapes.

Anyway, I'm glad I decided to dig into my KLIF archives again today, because I think the Ruby/Wade stuff is fascinating.

Warren Commission Document 1342 also proves that Ruby's name was mentioned on KLIF too. But these "Commission Documents" are like needles in haystacks. Who the heck even knows they're there? I was able to dig this one up [CD1342] after doing a search for "Glenn Duncan" at the fabulous Mary Ferrell site.

The sandwiches were there when I arrived [at the KLIF radio station]. I had not eaten. And I was very happy to have a sandwich. It was quite good, also. And I had a bottle of pop, and I said, "This is terrific, where did you get all this?" And the person I spoke to said, "Oh, some guy brought them up." And I said, "Great." 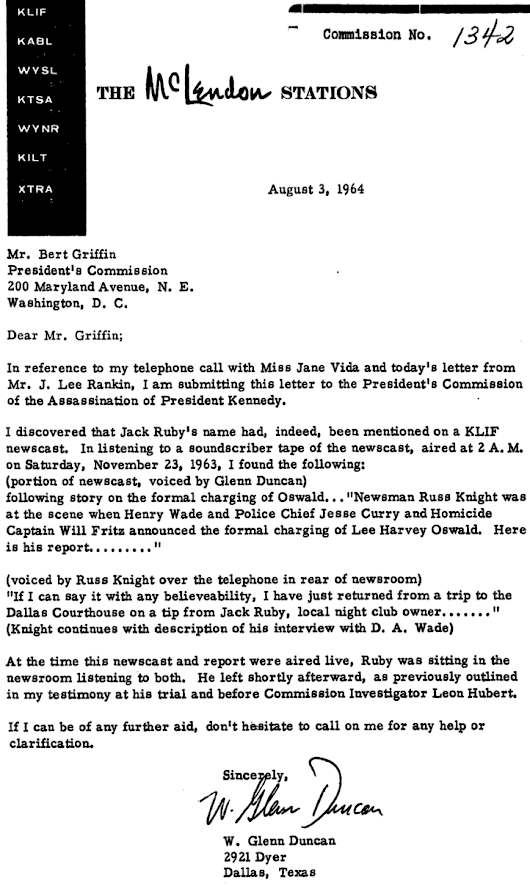 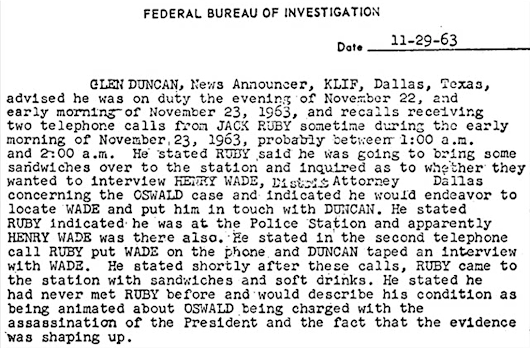