Do you really think Rowley was telling the truth when he said the bullet "was found amongst the clothes on one of the stretchers"?

You're just nitpicking here, Tony, and you know it.

James Rowley's memo in Warren Commission Document No. 320 [pictured below] corroborates the chain of custody of ONE bullet found on a stretcher at Parkland Memorial Hospital --- from O.P. Wright....to Secret Service agent Richard Johnsen....to James Rowley/Elmer Todd (although Rowley never says in CD320 that he HIMSELF [Rowley] ever took possession of the bullet, but Todd confirmed that fact in other documents). 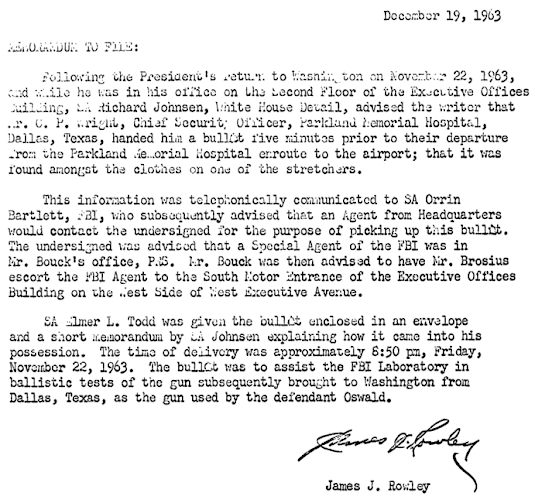 But Tony Marsh would rather nitpick Rowley's use of the word "clothes" rather than admit that Commission Document 320 does a nice job (at least in printed/document form) of shoring up the chain of custody for the Parkland Stretcher Bullet.

One candidate is Ronnie Fuller, whose clothes had been left on his stretcher.

Got a source link for that claim regarding Fuller's clothes being left on a stretcher, Tony? Never heard that one before.

In fact, come to think of it, I don't think I've ever seen any official documents that prove that the stretcher occupied by the young boy named Ronald Fuller was actually in the same corridor of Parkland Hospital with that of Governor Connally's stretcher.

As far as I am aware, it has never been confirmed or proven that it was young Mr. Fuller's stretcher that was in the Parkland first-floor corridor on November 22, 1963. And "Reclaiming History" author Vince Bugliosi doesn't think such a thing has been proven either.

"Author Josiah Thompson wrote in his 1967 book 'Six Seconds in Dallas' that the bullet was “very likely found on a stretcher used for a cut and bleeding two-and-one-half-year-old child” (Thompson, 'Six Seconds in Dallas', p.161), a reference to Ronald Fuller, who was admitted to Parkland’s emergency room fourteen minutes after the president and governor.

Fuller, who was bleeding profusely from a fall, was treated briefly on a stretcher in a hallway near the nurses’ station before being carried into Major Medicine for further attention.

Whether Fuller’s bloodied stretcher was then rolled thirty feet into the elevator corridor, where Tomlinson might have encountered it, is unknown. Thompson, who three pages earlier considers the act “very likely,” is forced to acknowledge, “We do not know for certain that it was Ronnie Fuller’s stretcher on which CE399 subsequently was found. . . As with most aspects of this case, final certainty again eludes us” (Thompson, 'Six Seconds in Dallas', p.164).

Thompson doesn’t address the issue of why a 6.5-millimeter Mannlicher-Carcano bullet, the exact type used to kill Kennedy and injure Connally, would have any conceivable reason for ending up not on Kennedy’s or Connally’s stretcher, but the stretcher of an infant.

Indeed, he doesn’t ask himself why any kind of bullet would end up on the child’s stretcher when the child wasn’t shot, unless, that is, Thompson wants us to believe that the sophisticated framers of Oswald goofed on a rather mundane duty, planting the bullet on the wrong stretcher." -- Vincent Bugliosi; Page 431 of Endnotes in "Reclaiming History"

But I think that all of that doesn't matter, because the Magic Bullet wasn't found on any stretcher. It was found on the floor, not on a stretcher.

The bullet never fell to the floor. That fact was confirmed when Darrell Tomlinson was asked that exact question ("The bullet didn't actually fall to the floor, did it?") by Raymond Marcus on July 25, 1966 (see Page 2 of the Marcus/Tomlinson transcript linked HERE).