I could use a little advice, if I may ask. I'm trying to locate a nice crisp, clear copy of the WFAA-TV live footage taken as the Kennedy motorcade is leaving Love Field Airport. I'm only interested in the footage where the limousine is departing, just after the portion where a bunch of, what appear to be Air Force men saluting, then jumping down from whatever they were standing on as the President rode past them.

I have located eyewitness Bill Newman, standing with his youngest son, Clayton, in his arms, as the limousine passes them. The Newman family were at Love Field hoping to get a good glimpse of the President and First Lady. Mrs. Newman was further back in the crowd, according to Mr. Newman, and didn't get to see the President while at Love Field.

Anyway...I'm hoping maybe someone can point me to a good clear copy. I sent what I have to the Newman family, and Mr. Newman said he thinks it looks like him, but he needs a better quality frame.

I know it doesn't add anything to the case, but I am a sucker for identifying witnesses in films and photos taken that day. Thanks everyone. See image circled in red: 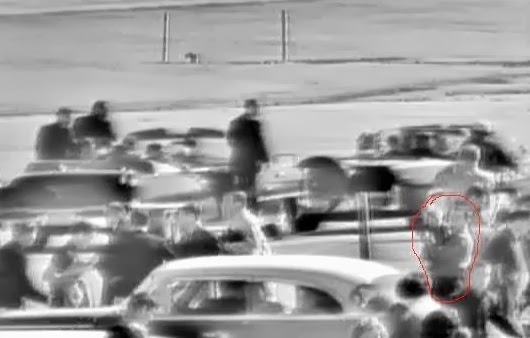 That's amazing, Steve. That does, indeed, look like Bill Newman holding his son. I think the shirt pattern fits nicely too.

I never knew I had Mr. Newman in my collection of Love Field videos. Very nice.

Have you searched my video sites, Steve? I have the entire Love Field arrival video, but I must say I don't think my copies can match the clarity of your still image above, which looks quite good actually. But here's my copy anyway---

It's just too bad that the KDFW site didn't extend this video a little longer, because that KDFW/KRLD copy of President Kennedy's arrival at Love Field is probably the best you'll ever see. But it's cut off just as the limo starts to roll.

Actually, yes, I did check your copy, back in November. Yours was the first place I went to to look for it. I grabbed the image you see from the DVD "The Story Behind the Story", which I think was released by the Dallas Morning News, back in 2003. Ed Cage was kind enough to send me a copy!

I will have to attach a shot of the Newmans at WFAA studios so people can compare him with the frame from Love Field. If the 1964 "Four Days in November" version of the footage didn't cut off where it does, that would have been the perfect copy! They cut it just a second or two before that sequence!

Oh yes, you're right, Steve -- the "FOUR DAYS" version would be the best. I'd forgotten that version. (How stupid of me.)

And I have the "Story Behind The Story" DVD set too. But the copy that is on my sites is taken from a WFAA copy that I obtained from collector Neal Ellis a few years ago. It has that damn counter thingy at the bottom, which I don't like, but it's much better (PQ-wise) than my other VHS copy which has tracking lines all through it.

I'll put together a comparison montage in a minute--comparing Newman at WFAA with your image above. Stand by...

David, I used my PhotoScape program to clean/clear it up a little, still just a tad blurry, but better.

OK. Ten-four, Steve. I'll use BOTH Love Field versions in the montage then. Coming in two minutes. Stand by....

I wish the left-hand picture of Newman at WFAA-TV was clearer...but it's the best I've got.

Anyhow, I don't want to imitate Ralph Cinque (who sees strange things in every picture ever made on 11/22), but I truly think you've found William Eugene Newman Jr. in that Love Field clip.

Everything seems to fit --- the hairline looks right....the little boy in his arms....the long-sleeve shirt which seems to be about the right "pattern" and shading in the B&W clips....plus the fact we do KNOW that Mr. Newman WAS out there at Love Field that morning to see the President's arrival. Fine job, Steve.

Like you said, it proves nothing in the "Conspiracy vs. Lone Nut" battle, but it is interesting to find something "new" like this in a video clip that I, myself, have watched 100 times at least. But I never "found" Bill Newman. But Steve Barber just did. Thank you.

Hopefully, we'll land on a much clearer copy of the WFAA Love Field footage. You should have seen me when I spotted this. I sat there in shock, thinking "No way!". The only thing that I couldn't figure out was--where is Mrs. Newman.

Then, when the entire Newman family appeared on C-Span this last November, Mr. Newman told the story about their being at Love Field, and it was then when I learned why she isn't with him in the film. He stated that she was further back, and couldn't get up there closer to the fence, so she didn't get a good view like he did. At 3:09, Mr. Newman talks about the Love Field visit, and he has the youngest of the two sons in his arms:

And, based on your first post above, you evidently know and have had contact with Bill Newman himself, right Steve?

Did you just "discover" this today or yesterday? And you got a reply from Mr. Newman already??!! Man, that's fast.

Actually, David, I found him in the Love Field footage in 2005. I showed it to both Dale Myers and Todd Vaughan when they visited me at that time, and they agreed it is Newman. Todd kept saying to me "I can't believe you found Bill Newman at Love Field!" I'll never forget that!

Over the years, I had just been hoping for a better copy of the footage to surface, so was waiting to contact the Newmans to share it with them until that happened, but it didn't, so I thought, maybe with the 50th anniversary coming up, one or more of the many documentaries will feature the film, but they didn't.

As soon as I saw the Newman family on the C-Span/Sixth Floor Museum video, and heard Mr. Newman talking about the scene at Love Field, where he was located, where Mrs. Newman was and why she isn't with him in the footage, and that he was holding James Clayton, I decided I was going to get in touch with them and share this.

But, in answer to your question, no I didn't know the Newmans, and this was the first time I'd ever contacted them, except for one time in 1979 when I phoned them and spoke with Billy, but Mr. and Mrs. weren't home at that time. Until December 3, 2013, I had never spoken with either Bill or Gayle Newman.

Thanks for the additional insight, Steve.

BTW, re: the "Four Days In November" footage --- I just now watched the "Love Field arrival" segment in that excellent David Wolper film, and it's so frustrating--because, as Steve said a little bit ago, the film cuts off the footage at Love Field just seconds before it gets to the point where the "alleged" image of Bill Newman can be seen. But, that's the breaks I guess.

I just made a second montage--with "Dealey Plaza" added (click to enlarge):

Although it's difficult to see such details clearly in a fairly blurry still frame from the WFAA news film, it seems to me that a case could possibly be made that the young child being held by the "Newman"-like man at Love Field is wearing the same clothes we see James Clayton Newman wearing in the famous Dealey Plaza photo showing all of the Newmans on the grass just after the assassination. A dark shirt with a sweater over the top of it?? Could very well be, IMO.

That's a deal closer. James Clayton's clothes look like a spot-on match to me too.

After you mentioned it, I took another look. The shirt is dark with a brown/tan jacket in both. That just proved it for me. Like you pointed out, we know they were there and what do you know, the clothing match! Home run, IMO.

You think so too, Michael? Cool.

I wasn't sure if I was just imagining it or not---but when I added the Dealey pic right next to the Love Field image in my second montage above, I started looking at the little boy's outfit. And it sure looked the same to me. 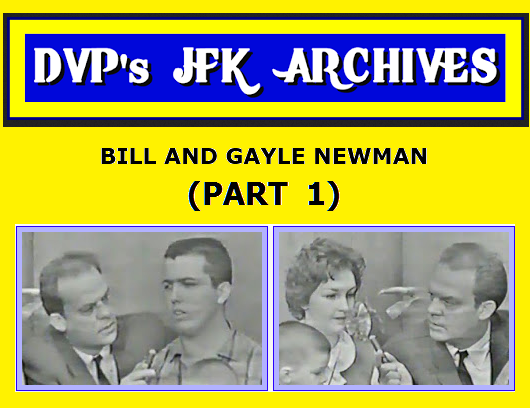