>>> "There are no pics showing the westend-seventh floor window immediately after, or during the shooting." <<<

Sure there is -- it's the Tom Dillard picture (which was taken within just a few seconds of Lee Harvey Oswald firing the last of his three shots at President Kennedy). And it shows every single window on the seventh floor. Every one. And they're ALL CLOSED SHUT. Every one: 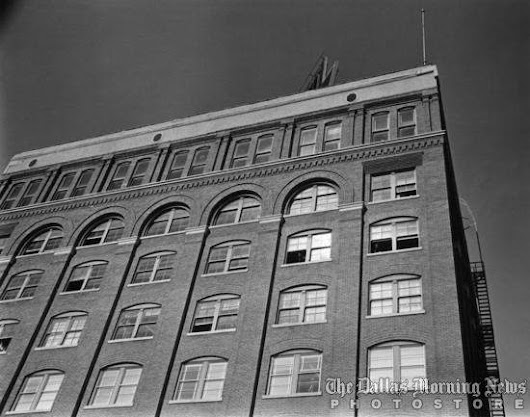 Plus, Dillard is obviously focusing his two cameras on the EAST side of the Depository Building. And there is Dillard's testimony regarding the window from where shots were fired and where Bob Jackson saw the gun--and it's the EAST side of the building (and only a moron would pretend that both Tom Dillard and Robert Jackson were "in" on a cover-up plot):

TOM DILLARD -- "We had an absolutely perfect view of the School Depository from our position in an open car, and Bob Jackson said, "There's a rifle barrel up there." I said, "Where?" I had my camera ready. He said, "It's in that open window." Of course, there were several open windows and I scanned the building. .... And at the same time I brought my camera up and I was looking for the window. Now this was after the third shot and Jackson said, "there's the rifle barrel up there." And then he said it was the second from the top in the right-hand side, and I swung to it and there was two figures below, and I just shot with one camera, 100-mm. lens on a 35-mm. camera which is approximately a two times daily photo twice normal lens and a wide angle on a 35-mm., which took in a considerable portion of the building and I shot those pictures in rapid sequence with the two cameras."


>>> "There was the Rowland-Brennan shooter aiming at Kennedy...his rifle including the barrel was seen not only by the Rowlands prior to the shooting, but by Brennan, Amos Euins and Worrel [sic]. Those 6 eyewitnesses [IT'S ACTUALLY ONLY FOUR WITNESSES, NOT SIX; BARBARA ROWLAND SAW NO GUNMAN ANYWHERE] saw a westend-window seventh floor shooter." <<<

You're putting a gun in the hands of a non-existent seventh-floor killer despite the fact we know that Euins, Worrell, and Brennan positively said they saw the gun in an EAST-END window. Worrell was standing by the TSBD front door, looked UP and saw a rifle. Is that supposed to be the WEST side of the building that Worrell was looking STRAIGHT UP at?!

Let's listen to James R. Worrell for a moment (providing further proof that Mr. "Lone" is a certifiable evidence-skewing retard):

JAMES WORRELL -- "I told the FBI it was either in the fifth or the sixth floor on the far corner, on the east side."

ARLEN SPECTER -- "Now looking at the picture which we have identified as Commission Exhibit No. 360, which is where you have drawn an "X," can you indicate the line of vision which you followed to the point where the rifle was to the best of your ability to recollect?"

Who cares? The seventh floor played no part whatsoever in the assassination of John F. Kennedy.


>>> "Nobody up there, just him, and the possibility to stand up and shoot. I believe the 7th floor was a so called "safe floor", (like there are CIA-safe-houses). One of the greatest victory's [sic] of the ongoing US-it was ossi-PR-campaign is, to put away the attention of all serious JFK-researchers from that 7th floor! Which, I believe was a "safe-floor". That all starts by misleading eyewitness [sic] like Brennan, Euins and Worrell by guys like Arlen Specter...The name 6th floor museum itself is a big hoax! Mack has to go one floor upwards." <<<

You're ready for a rubber room.