The time [of Oswald's trek from Beckley to Tenth St.] can NOT BE determined with ANY certainty. That's the whole point of contesting claims that he could. There is no set departure time, rate of walk or route.....no conclusion can be reached within the framework of the law.

And isn't that just EXACTLY what I said in my last post (the one you just responded to and excised this part re-printed below)?......

"People failing to "make the walk in time" via re-constructions after 11/22/63 is really pretty much worthless information....seeing as how the two critical pieces of data (LHO's exact pace and the precise timeline involved) to make a firm determination about OSWALD'S Nov. 22 movements are not known...and can never be known for certain." -- DVP; 09/15/07

But, of course, there is plenty of OTHER (non-"time"-oriented and non-"walking speed"-related) evidence that proves beyond a shred of a doubt that Oswald DID make that trip from Beckley Avenue to 10th Street in WHATEVER TIME NECESSARY TO GET THERE.

THAT is an undeniable FACT, based on the OTHER evidence -- e.g., OSWALD'S bullet shells at the scene and many witnesses seeing OSWALD at the scene murdering Tippit or running away with a gun in tow just afterward.

Why the topic of Oswald's guilt in the Tippit murder is even debated is absolutely beyond all belief. But, round & round we go...decade after decade. 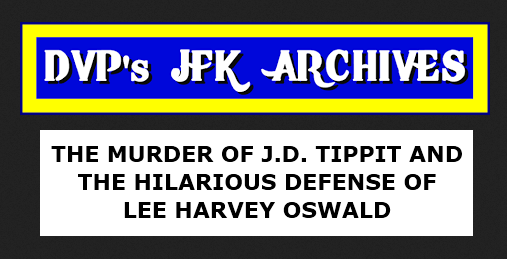