I respect your answers, but I have always had a problem with Specter and Bugliosi... however, with Bugliosi and Specter, they asked questions in a way that would serve their purposes..he asked about Connally, but never brought up the fact that he was asking about the same bullet going through JFK first...but it still doesn't answer that fact that no one has ever been able to duplicate the CE399...here it is, next to a bullet of the same make and caliber fired into just one wrist bone... 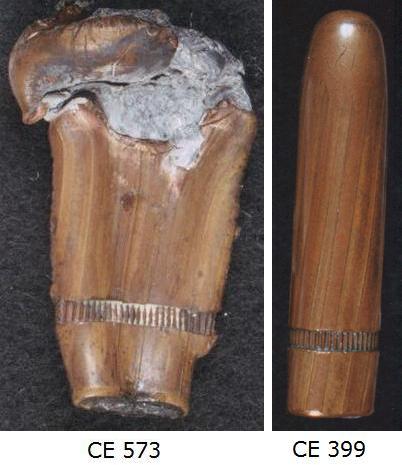 Steve, you're wrong about that picture of the bullets. That's my photo, and CE573 on the left was not fired into a wrist bone. 573 is the bullet recovered from General Walker's home in April '63.

But I find it interesting to note that Steve can easily see from that side-by-side bullet comparison that CE573 looks exactly like CE399, which was my whole point in putting that bullet montage together---to illustrate that the "Walker bullet" looks the same as 399.

Walker then sends a mailogram to Blakey that the bullet recovered was nothing more than a hunk of lead that didn't even resemble a bullet:

"The bullet used and pictured on the TV by US Senate G. Robert Blakey Committee on Assassinations is a ridiculous substitute for a bullet completely mutilated by such obstruction, bearing no resemblance to any unfired bullet in shape or form. I saw the hunk of lead, picked up by a policeman in my house, and I took it from him and I inspected it carefully. There is no mistake. There has been a substitution for the bullet fired by Oswald and taken out of my house."

Commission Exhibit No. 573 IS the bullet taken out of Walker's house. General Walker was wrong. Because if it's not and was planted by the police, we'd have to believe in the following silly scenario ---

The cops place a "fake" bullet into evidence to represent the "Walker bullet", but they mangle it JUST ENOUGH to make sure it can never be positively IDed as having come from the proverbial "patsy's" rifle (because none of the FBI firearms guys said it could be linked definitely to LHO's gun).

Silly beyond belief. The fact that that bullet CANNOT be linked positively to Oswald's gun is practically proof right there that it's no "plant".

Too many questions regardless, David, that won't go away, on this aspect and practically all the others in this case.

Ok, to the statement that Walker was wrong? ... The guy who was shot at...the guy standing in his house, sees the bullet or what was left of it, and was a military guy, and he was wrong on his observations...[?]

Well, Steve, I have no choice BUT to think Walker was mistaken. Every LNer thinks that same thing AFAIK. Because I most certainly am not silly enough to think the cops WANTED or even NEEDED to "plant" CE573 into evidence and then banged up the bullet to the point that it's essentially USELESS for framing the patsy that all CTers think they were framing---because that bullet cannot be tied to a particular gun. So, it's a worthless/useless "plant" for proving anything definitive, isn't it?

You can surely agree with me on that last point, right Steve?

Why do the CTers think the cops even WANTED or NEEDED to frame Oswald for the Walker shooting too? It was AFTER Oswald's own death when the connection was made between LHO and the Walker shooting, and the police already had a rock-solid case against that same person (Lee Oswald) for the Tippit and Kennedy murders.

So why the need or desire to start planting still MORE stuff to frame this same suspect for a THIRD murder attempt after he was dead? It's just dumb, IMO.

And I'll bet there are very few conspiracy theorists who have ever thought about an alleged Oswald frame-up for the Walker shooting in the way I just discussed.

Again: WHY do it? Oswald can only hang once. And he was already dead by the time the alleged "framing" for the Walker shooting even began.

You may be wrong about that, DVP. Walker called the German paper on 11/23, I'm learning today.

The foreign press started asking him about the incident and Oswald's possible involvement that very weekend (this is in Douglass' book I'm told...must be a footnote as Walker is not in the index).

Ted, a reporter did, indeed, ask Chief Curry on 11/23/63 if the JFK murder had anything to do with the "firing at Major General Walker". Curry's reply was: "I do not know."

So some people were already starting to think a link might be there between Oswald and the Walker incident as early as November 23rd. (And you can hear the reporter ask Curry that question in my "Curry Interviews" video on my sites too.)

But AFAIK, the first official tie-in between Lee Harvey Oswald and the Walker shooting occurred on (I think) November 30, 1963, several days after Oswald was graveyard dead.

And, I'll ask again: Why the NEED to frame him for a THIRD murder attempt? Weren't the Kennedy and Tippit murder charges enough in the DPD's (or FBI's) eyes?

Perhaps just to show his prior proclivity for violence.

At any rate, it's as problematic as the rest of the evidence.

To deny Oswald's guilt in the Walker shooting, a conspiracist has no choice but to totally disregard a lot of crucial testimony given by Marina Oswald. Plus, they'd have to believe that Commission Exhibit No. 1 is a fraud/fake too. Because CE1 pretty much seals the deal on Oswald's guilt in the assassination attempt against Retired Major General Edwin A. Walker on April 10th, 1963.

The German paper reported this before the FBI. I can't answer your question, but want to emphasize that the Walker episode is a critical one as far as many of us are concerned.

Oh yes, Ted, the Walker episode is, indeed, a critical part of the whole JFK assassination story. I just view the whole episode in a different (and non-conspiratorial) way.

It's very critical and crucial, in my view, because since we KNOW beyond any reasonable doubt (via CE1 and Marina Oswald's own testimony, plus the "Carcano"-like look to CE573) that Lee Oswald DID, in fact, take that potshot at General Walker, it illustrates very vividly and plainly that Oswald had murder running through his veins as early as April of 1963, seven months before he took that same rifle to work on November 22nd and shot the President with it.

Shouldn't Oswald's capacity and WILLINGNESS to kill a human being prior to November 22 be viewed as a key element to his overall make-up and personality? In fact, it's one of THE key elements in the whole JFK saga, in my opinion, simply because I can make (with confidence) the following statement about Lee Harvey Oswald---

Oswald was, in essence, a political assassin seven months prior to murdering President Kennedy.

That's a pretty important thing to know about a person who has been charged with assassinating the President of the United States, don't you think? I sure do.

Clearly, we differ on reasonable doubt.

Given CE1 AND Marina's testimony, do you, Ted R., REALLY think there's reasonable doubt of Oswald's involvement in the shooting of General Walker? Really?

CE1 is Commission Exhibit #1, a note in Russian in Oswald's verified writing. This note was found by Marina on the night of the Walker shooting, and it is pretty much proof that Oswald was planning to do something that would either land him in jail or in the cemetery shortly thereafter.

Now, what do you suppose Oswald might have been planning? 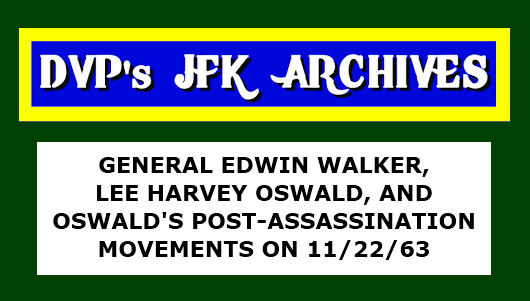