>>> "The paper [bag] HAD NO ABRASIONS, which, during all other re-creations, showed it HAD TO LEAVE ABRASION MARKS." <<<

Those silly-willy patsy-framing plotters are at it again, I see ---
They plant a fake paper bag that they want people to think carried Lee
Oswald's rifle, but -- oops! -- they forgot one thing! They forgot to
ACTUALLY PLACE A RIFLE INSIDE THE BAG AT ANY POINT IN TIME, so
that the "abrasions" (as Richard Van Noord likes to call them) can appear
on the bag and also so that some oil stains will appear on the bag too.

Not to mention the fact that these stupid plotters should have WANTED
to put a rifle in their "fake" bag for another critical reason as well
-- to make sure Oswald's dismantled rifle WOULD FIT INSIDE THE "FAKE"
BAG.

Did the lazy plotters just get lucky when it was later discovered that
Oswald's 34.8-inch weapon (when broken down) would, indeed, fit inside
the 38-inch "fake" bag that was planted in the Nest (which was a bag
that, per conspiracists, never had a rifle inside of it any any point in
time)?

Nobody can know the answer to that question with 100% certainty, of
course, since Mr. Oswald wasn't nice enough to tell us that
information before Jack Ruby took care of him on Sunday morning.

But given the SUM TOTAL of the paper-bag evidence, there can be little
doubt that Oswald DID, indeed, construct that makeshift, handmade
paper bag at some point prior to approximately 7:10 AM on Friday
morning, November 22nd, which was the first time anyone noticed Oswald
with a bag, when Linnie Mae Randle watched LHO approach her house in
Irving carrying a bulky paper package [see video below].

Vincent Bugliosi, in his JFK book, says something interesting
regarding this "paper bag" subject that I had never heard postulated
before. At one point in the book's "Lee Harvey Oswald" bio chapter, VB
says that when the Oswalds' personal possessions were being moved from
New Orleans to Ruth Paine's garage in Irving, Texas, in late September
1963, the rifle was ALREADY wrapped in brown wrapping paper and then
placed in the blanket roll (where it remained until LHO took it out of
the blanket on November 21st or 22nd).

"Looking back, Ruth [Paine] realized he [Lee Oswald] had been
"distinctly" eager to do the packing. He was probably trying to avoid
having her handle, any more than she had to, the Mannlicher-Carcano
rifle, which he had disassembled, wrapped in a brown paper package,
and tied up in a blanket. ....

"But of course someone had to unpack the package when Ruth
arrived in Texas a few days later, and it was her husband Michael,
whom she had called to help her. He was perplexed by the weight and
feel of the contents of the package, thoughts like "camping equipment"
and "an iron pipe" entering his mind. These guesses didn't seem quite
accurate to him, but being the "polite" Quaker he was, and aware of
Oswald's "rights to privacy," he never snooped. He would later say he
was satisfied it was Oswald's rifle." -- Vincent T. Bugliosi; Page 746
of "Reclaiming History" (c.2007)

So, per Bugliosi's account, the rifle was ALREADY "disassembled" and
it was ALREADY "wrapped in a brown paper package" when Lee Harvey
Oswald placed the rifle atop Ruth Paine's station wagon in September
of '63 in New Orleans, Louisiana.

However, when examining this topic a little further, I really don't
think VB's account can be accurate with respect to the rifle being
wrapped in brown paper when the blanket containing the Mannlicher-
Carcano rifle was moved from New Orleans to the Paine residence in
Irving in September.

WESLEY LIEBELER -- "I now show you Commission Exhibit 364, which is a
replica of a sack which was prepared by authorities in Dallas; and I
also show you another sack, which is Commission Exhibit 142, and ask
you if you have ever seen in or around your garage in Irving, Texas,
any sacks similar to those?"

MR. LIEBELER -- "Have you seen any paper in your garage in Irving
prior to November 22, 1963, or at any other place, at your home in
Irving, Texas, that is similar to the paper of which those sacks are
made?"

MR. LIEBELER -- "When you moved the sacks, the blanket, the package
that was wrapped in the blanket in your garage, were you able to
determine whether or not the object inside the sack was also wrapped
in paper?"

MR. PAINE -- "I would have said that it was not. When we practiced
wrapping that rifle yesterday, I would have guessed that any paper
around the barrel in there, which I could feel with some clarity,
would have crinkled."

MR. LIEBELER -- "And to your recollection there was no crinkling in
the package wrapped with the blanket?"

There is also the following testimony from Michael Paine regarding the
length of the object that was inside the blanket roll which was being
stored in Ruth Paine's garage.

This is testimony from Mr. Paine that could very well indicate the
possibility that the rifle WAS, indeed, already disassembled when it
was being stored at the Paine residence, because the overall length of
the paper bag found in the Sniper's Nest on November 22 measured just
one inch longer than the estimate provided by Mr. Paine.

But, then too, it should also be noted, to be perfectly fair, that the
full length of Oswald's rifle when assembled (40.2 inches) was not
really too much longer than this estimate made by Michael Paine:

MR. LIEBELER -- "How long was this package in your estimation?"

MR. PAINE -- "Well, yesterday we measured the distance that I
indicated with my hand; I think it came to 37 inches."

And then we have this portion of Mrs. Ruth Paine's WC testimony
regarding the length of the blanket roll that she first noticed on the
floor of her garage in late October of 1963 (which is testimony that
would tend to lean toward the probability that the rifle was not
dismantled when Ruth saw it in her garage):

ALBERT JENNER -- "I take it from your testimony that the blanket, when
you first saw it in a garage, was in a configuration in the form of a
package?"

RUTH PAINE -- "It was a long rectangle shape with the ends tucked in."

MR. JENNER -- "Would you be good enough to re-form that blanket so
that it is in the shape and the dimension when you first saw it?"

MR. JENNER -- "For the record if you please, Mr. Chairman, the length
of the form is just exactly 45 inches, and it is across exactly 12
inches."

And there's Marina Oswald's testimony, which almost certainly supports
the idea that the rifle was not wrapped in brown paper while being
stored on the floor of Ruth Paine's garage:

MARINA OSWALD -- "I had never examined the rifle in the garage. It was
wrapped in a blanket and was lying on the floor."

J. LEE RANKIN -- "Did you ever check to see whether the rifle was in
the blanket?"

MRS. OSWALD -- "I never checked to see that. There was only once that
I was interested in finding out what was in that blanket, and I saw
that it was a rifle."

MRS. OSWALD -- "About a week after I came from New Orleans."

MR. RANKIN -- "And then you found that the rifle was in the blanket,
did you?"

So, when evaluating and assessing the totality of all of the above
snippets of testimony from the various individuals who saw the rifle
and/or the rolled-up blanket on the floor of the Paine garage, I'm
compelled to think that Mr. Bugliosi is incorrect with respect to his
remarks on page #746 of "Reclaiming History" when VB claims that the
rifle was already wrapped up in brown paper when Lee Harvey Oswald
loaded it into Ruth Paine's car in September 1963.

In the final analysis, I'm convinced beyond any and all reasonable
doubt that Lee Oswald, at some point prior to 7:10 AM on 11/22/63,
constructed a homemade paper bag with which to conceal his Mannlicher-
Carcano rifle.

If I had a gun to my head and was being forced to explain just exactly
WHEN Oswald created his makeshift rifle-carrying bag, I'd say this:

Oswald, IMO, most likely took some wrapping paper and tape from the
Texas School Book Depository's first-floor shipping/mailing area on
Thursday, November 21st (which is the same day he asked Wesley Frazier
for the unusual weeknight ride to Ruth Paine's home in Irving).

Yes, it's true that TSBD "mail wrapper" Troy West testified that he
had never seen Oswald hanging around the wrapping-paper area on the
first floor, but I think it's a fair and reasonable assumption to say
that Oswald, in his quest to gain access to the paper and tape, was
probably wise enough to wait until Mr. West had left his work station
for a few minutes.

Perhaps Oswald waited until West went to use the bathroom, which
everybody has to do a few times every single day of their lives. And
while West was temporarily away from his mailing station, Oswald
swiped some wrapping paper and some tape.

And, undoubtedly, LHO folded up the wrapping paper so he could conceal
the paper more easily during his ride to Irving with Frazier on
Thursday evening.

Oswald probably hid the folded paper and tape under his blue jacket
that he certainly wore to work at least one time shortly before
November 22nd (LHO's blue jacket was found in the first-floor
"Domino Room" in early December 1963).

It's also worth mentioning that the bag found on the sixth floor of
the TSBD after the assassination had symmetrical, evenly-spaced folds
in it....just as if someone had folded it up to make its size much
smaller before using it for stashing a 30-plus-inch object (like, say,
a dismantled Mannlicher-Carcano rifle)..... 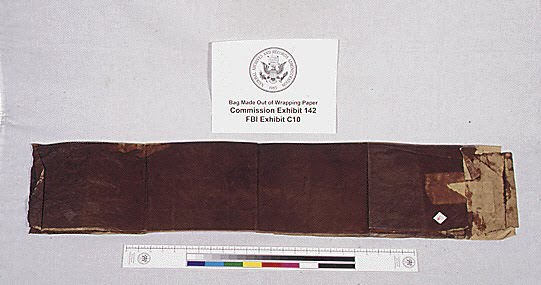 West didn't say that a Depository employee positively COULDN'T have
taken some paper and tape from the workbench/mailing area. In fact,
with respect to the tape, Mr. West specifically told the Warren
Commission that employees "could come get it if they wanted to use
it".

MR. BELIN -- "Do you know whether or not he ever borrowed or used any
wrapping paper for himself?"

MR. BELIN -- "Did you ever see him around these wrapper rolls or
wrapper roll machines, or not?"

[Regarding the tape dispenser:]

MR. BELIN -- "Could other employees come and pick up some of the tape
for themselves?"

MR. WEST -- "Yes, sir. They could come get it if they wanted to use
it; but all the time it was there where it is supposed to be."

OSWALD, HIS RIFLE, AND THE PAPER BAG

FRAZIER, RANDLE, AND THE PAPER BAG