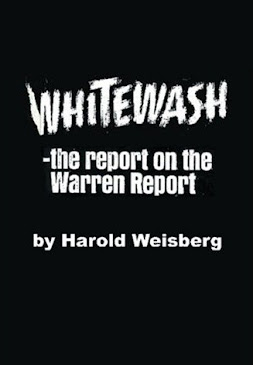 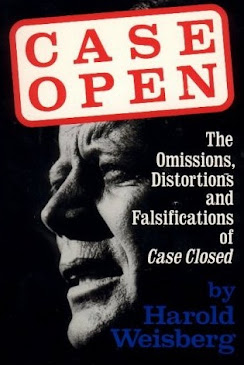 HAROLD WEISBERG:
TOP-NOTCH RESEARCHER?
OR JUST ANOTHER
"ANYBODY BUT OSWALD"
CONSPIRACY NUT?

The above audio clip was taken from a radio interview in the 1980s featuring famous JFK assassination researcher Harold Weisberg. And it's a clip that should make any reasonable person have serious doubts about the accuracy of anything else Mr. Weisberg had to say concerning the assassination of President Kennedy, because it's a clip that has Weisberg saying something so incredibly silly and provably incorrect that you'd almost have to ask yourself this question after hearing Weisberg make such a stupid claim: Is Weisberg really talking about the JFK case here, or is he referring to some other case entirely?

Here's what Harold Weisberg said in the above radio interview:

"I'm inclined to think that Oswald did no shooting at all, and I have no reason to believe that any of the shooting came from the sixth floor. All of the evidence that tends to indicate that is corrupted in one way or another."

Now I know that the late Mr. Weisberg is considered by many JFK conspiracy theorists to be one of the "deans" among the first generation of Warren Commission critics, with many people propping up Weisberg as the very best of all assassination researchers -- but when a critic makes statements like the ones I just quoted above, I have to scratch my head and wonder why on Earth ANYONE would place any faith in this guy whatsoever and prop him up as some kind of "God" among researchers?

The part about Weisberg actually believing that NO SHOTS AT ALL were fired from the sixth floor of the Texas School Book Depository on 11/22/63 is so far out and so provably wrong that I have to wonder whether all of Mr. Weisberg's marbles were present and accounted for when he made such a patently crazy statement in the 1980s.

For, the evidence that proves that multiple gunshots were fired from the southeast corner window on the sixth floor of the Depository is not just beyond any reasonable doubt, the evidence to prove that fact has unquestionably been established beyond all possible doubt. And even most conspiracy theorists will acknowledge that some shots were, indeed, fired from the sixth floor.

Only a person who wants to ignore or deliberately mangle and misrepresent ALL of the following physical evidence and eyewitnesses can possibly believe that no shots at all came from the sixth floor of the TSBD:

1.) The first-day (11/22/63) interviews and affidavits and statements from several eyewitnesses, in which various witnesses told their story about having seen a gunman (or a gun) in the southeast window on the sixth floor of the Book Depository.

These witnesses include: Howard Brennan, Amos Euins, Robert Jackson, and Mal Couch (and a couple of others). And most (if not all) of these people told their eyewitness accounts within literally hours of the shooting (or even less), either via written affidavits that they filled out at the Dallas Sheriff's Department, or by way of live radio interviews, such as WFAA-TV cameraman Mal Couch's live report that was broadcast on WFAA-Radio very shortly after the assassination on 11/22/63 (which can be heard below).


The above Mal Couch interview, all by itself, totally destroys Weisberg's fantasy (or anyone else's similar fantasy theory) about NO SHOTS coming from the sixth floor of the Book Depository Building. Couch's statement on live Dallas radio on the very day of the assassination has Couch confirming (for all time) that he actually saw a rifle being pulled in from an upper floor of the TSBD.

Couch said it was the "fifth or sixth floor" of the Depository, and he also said this: "There were people underneath the rifle, who looked up to see where the shots had come from."

And that can mean only one thing: Mal Couch had to have seen the rifle protruding from the SIXTH floor of the building, because the people he saw "underneath the rifle" were on the fifth floor, a fact that is confirmed by
Tom Dillard's photograph.

Therefore, in order to believe (as Weisberg believed) that no shots were fired from the sixth floor at all, you'd have to believe in one of these two things (both of which stretch reasonable thinking to the breaking point):

Mal Couch was either a liar or was mistaken when he said that he saw a rifle being pulled back into the sixth-floor window.

The person who was sticking a rifle out of the sixth-floor window was not really using his rifle as an assassination weapon that day -- the gunman was merely pointing it out the window as a prop or just for "show", but he didn't really fire any shots with that rifle.

Both of the options above, of course, are just plain silly.

2.) Three spent shells from Lee Harvey Oswald's Mannlicher-Carcano rifle were found underneath the sixth-floor window -- i.e., underneath the very same window that eyewitnesses said they saw a rifle protruding from.

3.) Oswald's very own Carcano rifle was also found on the same sixth floor. And it was proven that that exact Carcano rifle of Oswald's was the weapon that fired bullets at JFK, via the fact (among other things) that bullet fragments from that exact gun were found in the front seat of the limousine. (Did Mr. Weisberg really think that bullet fragments CE567 and CE569 were planted in the President's car in order to frame Oswald?)

4.) Witnesses on the fifth floor of the TSBD, Harold Norman in particular, heard a rifle being fired directly over their heads as the shooting was occurring, with Norman even hearing three cartridge cases hitting the plywood floor above him. (Is Harold Norman a liar too?)

In the face of all of this evidence, Harold Weisberg (who knew this case like the back of his hand) actually had the nerve to utter this statement on a San Francisco radio station:

"I'm inclined to think that Oswald did no shooting at all, and I have no reason to believe that any of the shooting came from the sixth floor. All of the evidence that tends to indicate that is corrupted in one way or another."

There's only one additional thing that needs to be said here: