It doesn't refer to an injury that I deny at all. The caption accompanying that particular X-ray photo (Figure 17, which is located in the House Select Committee volumes at 7 HSCA 109) is referring to the small ENTRY wound in the "occipital" region of John Kennedy's head.* It's not referring to any kind of a large, gaping EXIT wound in the occipital region of the head.

That fact becomes quite clear when reading the text that surrounds Figure #17 in HSCA Volume 7 (on page 109 and page 110 of Volume 7).

And please note how, on page 110, the caption used for a computer-enhanced version of the LATERAL X-ray (autopsy X-ray #2) utilizes several of the EXACT SAME WORDS that are also used in the caption for Figure 17 (which is a picture of the A-P X-ray) -- i.e., "adjacent missile fragment" and "occipital defect" [plus the key words "with beveling", indicating that the HSCA is certainly NOT talking about an exit wound here; they're referring to an ENTRY wound that is "beveling" inward].

I'll readily admit that, at first blush, the A-P autopsy X-ray shown in Figure 17 seems to give the false impression that the entire right side of JFK's head was missing (from front to back). But when we go to page 111 of HSCA Volume 7, we get to see a better, more detailed view of that A-P skull X-ray (via computer enhancement).

And we can easily see that the enhanced A-P X-ray aligns itself very nicely with the lateral (enhanced) X-ray of the right side of President Kennedy's head (i.e., the BACK of JFK's head is STILL THERE in both computer-enhanced autopsy X-rays): 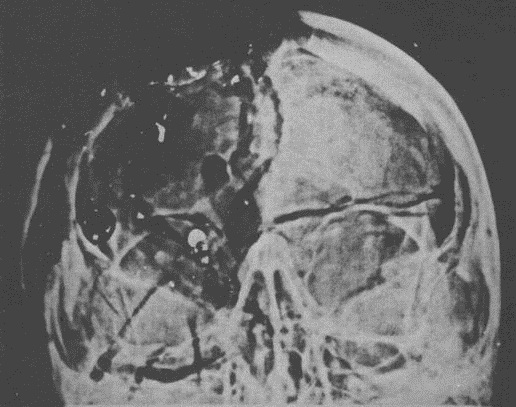 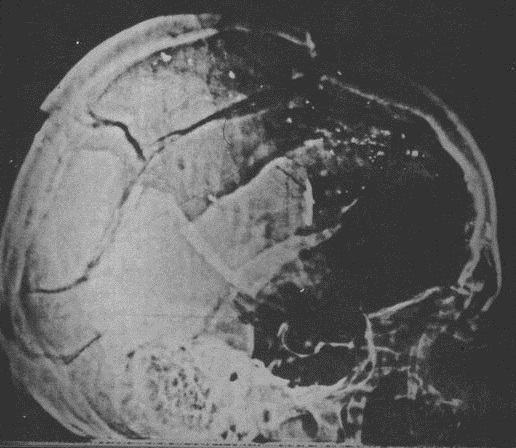 * Although, technically, the entry wound in the back of JFK's head was not really located in "occipital" bone. It was closer to "parietal" bone.


>>> "Why is the transmittance of the right side of this X-ray consistent with big holes in the right-front and the right-rear of the head?" <<<

See explanation above. Figure 17 is somewhat misleading. This computer-assisted version of that very same X-ray makes things much clearer.


>>> "Finally why [does] the Fox Photo F1 show intact scalp overlying the position of the large hole in the front-rear of the head?" <<<

This autopsy photo [below] shows no such thing. You're interpreting it incorrectly: 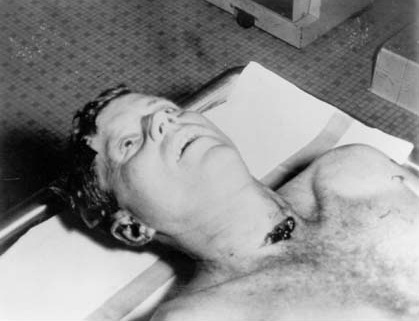 >>> "I extend my apologies for mistaking you for a member of the cowlick club." <<<

Oh, I'm definitely a member of the "cowlick club". The entry wound was most certainly located high on JFK's head, near the cowlick, just as the HSCA determined.

The term "occipital" in Figures 17 and 18 of HSCA Volume #7, however, is still referring (obviously) to the BACK-OF-THE-HEAD ENTRY WOUND NEAR THE COWLICK. That location is, indeed, technically a bit above the "occipital".

But the term "occipital" (as used in those HSCA exhibits) is positively referring to the bullet's ENTRY hole at the back of the head. That's obvious by the verbiage we find in the caption for Figure 18, which says: "occipital defect with beveling". Plus, there are the words "inward beveling" that appear just below Figure 18 on that same page of Volume 7 (page 110).

Therefore, what other head wound (with references to "beveling" and "inward beveling") could the HSCA possibly be referring to on page 110 of Volume 7 if not the ONE AND ONLY bullet wound of entrance in the back of Jack Kennedy's cranium?