"A Year Ago Today" is a one-hour television special that aired on Dallas' WFAA-TV on Sunday, November 22, 1964, exactly one year after President John F. Kennedy was assassinated.

Various WFAA newsmen and Texas officials tell of their own personal experiences relating to the unforgettable weekend in November 1963 when America's President was slain on a city street in Dallas, Texas.

Note -- Apparently John Allen of WFAA, who typed up the first bulletin concerning the shooting for WFAA-Radio, must have borrowed Superman's red cape on 11/22/63, because in this documentary John tells of his incredible feat of broadcasting that initial bulletin to the radio audience a mere 30 seconds after JFK was shot. Talk about lightning-like speed!

Obviously, Mr. Allen cannot possibly be correct when he said he announced the first WFAA-Radio bulletin on the air at approximately 12:30:30 on November 22nd.

Also: As of 12:30:30 PM, it would have been impossible for John Allen to have known that "three shots" were fired at the President's motorcade from Allen's listening to the police radio frequency only (which is what he claims in this "A Year Ago Today" program).

Allen must have gotten the "three shots" information from either Merriman Smith's UPI newswire bulletin (which ran on the wires at 12:34 PM) or from the AP wireservice report provided by Jack Bell just a minute or two after UPI's first bulletin.

These facts almost certainly mean that John Allen's first bulletin over WFAA-Radio couldn't possibly have occurred until at least 12:35 PM or 12:36 PM. 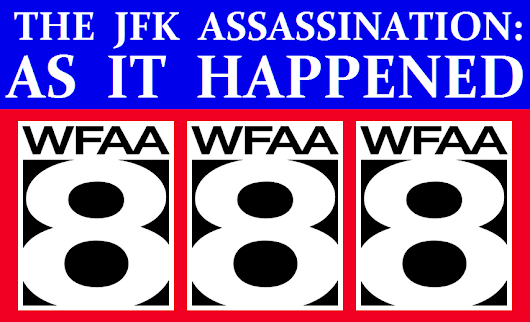