At another forum earlier this year, researcher and author Jean Davison provided some interesting information that should make some conspiracy theorists think twice about whether CE399 was the "stretcher bullet" found at Parkland Hospital by Darrell Tomlinson.

And, yes, I certainly trust Ms. Davison and her research. In fact, I'm more inclined to accept anything that Jean says as the absolute truth regarding pretty much anything concerning the JFK murder case than I am to accept any other researcher's information.

1.) Tomlinson told Marcus that he had been shown a bullet by an FBI agent (although it possibly wasn't Bardwell D. Odum), and Tomlinson had told the FBI agent (according to Marcus) that the bullet he was shown looked generally the same as the bullet Tomlinson found on a stretcher on 11/22/63.

2.) Tomlinson also told Marcus that the bullet he found on Nov. 22 came from a stretcher that HAD, indeed, been taken off of the elevator a short time earlier.

Here are Jean Davison's verbatim remarks concerning those two important CE399 matters (and surely the conspiracy theorists aren't going to start bashing one of their own--Mr. Marcus--are they?). And in the last post of Davison's below, an additional interesting fact is revealed, via Tomlinson's 1966 interview with another conspiracist, Josiah Thompson (which is a quote relating to CE399 and CE572 that is always totally ignored by conspiracy buffs):


"[Darrell] Tomlinson told WC critic Raymond Marcus that he and [O.P.] Wright were shown the bullet by [Gordon] Shanklin and that it looked like the same one to him. Whether it was really Shanklin or not, I don't know, but you might want to order a transcript of his 7/25/66 interview from the Archives, because Tomlinson also told Marcus that he believed the bullet came off the elevator stretcher. (IMO, Tomlinson never was sure which stretcher it was, and he wavered back and forth.) 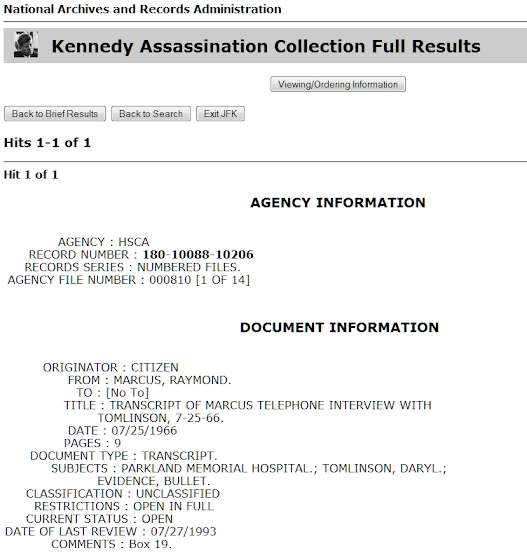 "I thought you [Robert Harris] might like to know that Tomlinson told Ray Marcus and another interviewer that the bullet came from the elevator stretcher, because you said in your video that Tomlinson was "always adamant" that it didn't." -- Jean Davison; July 29, 2011

"Concerning Odum, Tomlinson told Marcus that he was shown the bullet by a different FBI agent and that it looked like the one he found." -- Jean Davison; July 29, 2011

"Only one of these men said, 3 years later, that the bullet didn't resemble CE399 -- [O.P.] Wright. The two Secret Service men didn't say it was NOT the stretcher bullet, and Tomlinson didn't either. (If they did, please quote it.) Again, Tomlinson told researcher Ray Marcus that the FBI showed him the bullet and that it looked like the one he found. Marcus provided a transcript to the HSCA that can be ordered from the National Archives. Marcus is a conspiracy theorist, not a "WC defender." Do you think he just made that up?

"Josiah Thompson interviewed Wright and Tomlinson in 1966. He wrote, 'Tomlinson's recollection of bullet shapes was not very clear, and he could only say that the bullet found resembled either CE 572 (the ballistics comparison rounds) or the pointed .30 caliber bullet Wright had procured for us.' ... The CE 572 bullets [shown below] look very much like CE 399." -- Jean Davison; November 22, 2011 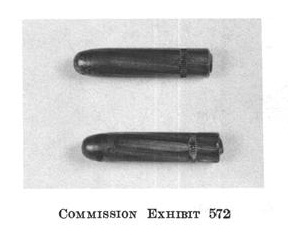 Did Jean call Marcus on this?

Or do you want me to?

I have no interest in looking up a disinformationist's comments on a google group.

So just answer the questions.

So, I would guess that you will have no problem whatsoever declaring that Jean Davison just made it all up, eh, Jimbo?

Anyway, I will not answer your question (put to me the obnoxious way that you have done above). Instead, I think I'll keep Mr. Anybody-But-Oswald guessing.

Or you can always purchase the transcript of the Marcus/Tomlinson interview, which (as Jean said) is available from the National Archives.

I hope it drives you crazy in the next few weeks and months, as you think about one your guys (Marcus) actually making public something that would do a great deal of harm to your unprovable notion that Commission Exhibit No. 399 was never shown to Darrell Tomlinson by the FBI, and that Tomlinson had always maintained that 399 looked nothing like the stretcher bullet he found.

The Marcus HSCA transcript destroys both of those pet theories that you conspiracy clowns embrace so dearly.

And the best part of it is -- Those two CT beliefs are being destroyed by a conspiracy theorist.

Ya gotta love it.

If you look at Thompson's book, you will see the drawing Tomlinson made for Specter which leaves it unambiguous about which stretcher he found the bullet on. (See page 156)

And I like the way you changed the phrasing on the FBI agent who showed him the bullet. You first say that it may not have been Odum, then Davidson [sic] says it was not him. Just like the McAdams Gang always does.

You aren't thinking straight, are you Davy Boy? My essay on CE 399 just drives you over the edge, does it not?

As per your other "revelation", please read Thompson's book, page 175, footnote 17. You, and Jean's, idea of hot news is about forty years behind the curve.

Now let us get to the wheat:

1. Please explain the lack of initials on the bullets.

2. Please explain the time discrepancy as John Hunt points out in his essay, and which you are very familiar with. That is, how did the bullet get to the FBI at 7:30, if it was still at the White House.

3. Please explain the Hoover lie as pointed out by Aguilar and Thompson in their essay, you know, the made up FBI memo which Odum blew to smithereens?

4. Please explain why Todd's initials are not on the bullet as they have to be? (BTW, did you ever get to the Archives to show everyone what a blatant, dirty liar John Hunt is and was? You know, how Todd's initials are really there and he faked the photos? If you did, why have you not written about it? )

5. Please explain why the FBI called Tomlinson at midnight to hush him up on the 22nd?

[DVP INTERJECTION: This is total bullshit, of course. It's possible, I suppose, that the authorities might have called up Tomlinson and asked him to keep what he knew about the stretcher bullet under his hat, so to speak, until Oswald's trial. After all, on the night of Nov. 22nd, Oswald was still alive, and he had just officially been charged with JFK's murder at 11:26 PM CST on 11/22/63. Thus, everyone at that time expected him to go to trial. And perhaps the FBI didn't want Tomlinson to say very much to anyone about the specific evidence in the case until the trial. But that type of situation, if it did occur, would certainly not be an indication of an FBI "cover-up" or of a conspiracy of any kind. DiEugenio, as always, fails to evaluate ANY possible "non-conspiratorial" explanations for ANYTHING in this case. Everything ALWAYS leads to conspiracy, per Jimbo. Always.]

6. Please explain how Wright kept the one thing he discovered that day of momentuous importance out of his personal report of what happened to him on the 22nd.

7. Please explain why there is no evidence that Specter interviewed Wright or his wife, who was head of nursing at the hospital. And who told Tink that other nurses showed her other bullets they picked up that day.

"Destroyed" my butt. This is about as credible as the CBS excerpt with Eddie Barker that you also promoted.

Which is a CBS excerpt [see embedded video below] that has Darrell Tomlinson saying, flat out, that the bullet was on the stretcher he had taken off the elevator!

How much more clear-cut do you want it, Jimbo? Or do you think that somebody was impersonating Darrell C. Tomlinson in that CBS News program from June of 1967?

In fact, it's better for LNers if it WASN'T Bardwell D. Odum, because that means we wouldn't have to cast a lot of doubt over Odum's 37-year-old "memory" of the incident. In other words, Odum was right. He never showed Tomlinson the bullet at all. It was some other FBI agent who did that, and CE2011 contains an honest error regarding the name of the agent who took CE399 to Parkland. (Personally, though, I still think it was Bardwell Odum.)

Anyway, it's a win-win-win for LNers. A triple loss for conspiracy theorists like James DiEugenio:

Loss #1.) The Marcus interview with Tomlinson shatters the CTers' theory about the FBI lying re the 6/12/64 visit by the FBI to Parkland to show Tomlinson & Wright CE399.

Loss #2.) It destroys the notion that Tomlinson NEVER said that 399 looked like the stretcher bullet.

Loss #3.) In that same Marcus interview, Darrell Tomlinson makes it clear that the stretcher that contained the bullet was the stretcher that was taken off of the elevator by Tomlinson, which is an idea that CTers don't like at all, even though Tomlinson is actually on television in 1967 saying that very same thing (at 41:25 of the video below).

Not a good day for Jim DiEugenio and the ABO [Anybody-But-Oswald] conspiracy crowd. 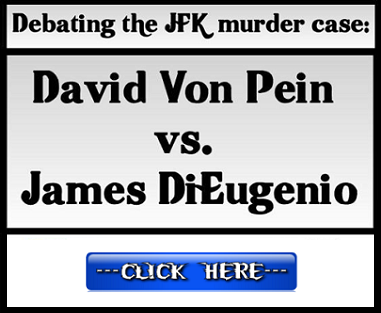