The two Tomlinson videos posted by David [Von Pein] show how unreliable witness memory can be -- in 1967 he was sure it was found on the elevator stretcher, years later it was the other one:

In the first interview he said that after he looked at the bullet he put it in his pocket -- which would mean that he was the only person who actually saw it as it lay on the stretcher. The two stretchers were side by side. Suppose he misremembered which one from the very beginning and pointed out the wrong stretcher to Wright? In that case, it wouldn't matter what articles were on the stretcher.

I agree with David that however it went down it's much more likely that the bullet was found on the stretcher that came off the elevator from the second floor, where we know a gunshot victim had just been taken and where the surgeon was puzzled because he couldn't find a bullet:

Dr. GREGORY -- "I would say that that [thigh] wound was about a centimeter in diameter, much larger than the identifiable fragment of metal in the thigh. I might add that this prompted some speculation on our part, my part, which was voiced to someone that some search ought to be made in the Governor's clothing or perhaps in the auto or some place, wherever he may have been, for the missile which had produced this much damage but which was not resident in him."

How can you possibly assess probabilities on this? Have you done any research on the comparative likelihood of a bullet's being placed on a stretcher versus the likelihood it would be overlooked by numerous employees before being spotted on a stretcher? Of course not.

I'm not talking about a statistical probability, Pat, I'm stating an opinion (as are you, right?). People overlook all kinds of things when they're focused on something else. (Have you seen the gorilla on the basketball court video?) Tomlinson might have missed it too if it hadn't made a noise when it hit the rail.

The improbable part to me is someone finding a bullet in the limo and then moving it. Why on earth would anyone do that? What was he thinking? A bullet in the limo is clearly connected to the shooting -- but on a stretcher in the ER? What's the point?

The bullet's being found in the limo is only one possibility. Seeing as we know Kinney and Hickey partially cleaned up the limo, and then stopped, and then failed to admit they'd done so in their reports, I don't think it's at all far-fetched that they would not want anyone to know they'd found the bullet.

Why use the word "admit"? Do you think they were knowingly doing something wrong? Many details were left out of the lawmen's reports, especially "gory" details.

What I really don't understand is, why move the bullet, why not just leave it there? Could you explain that to me?

But there's plenty of options should one find that unlikely that are nevertheless still far more likely, IMO, than the "official" story of the bullet's going unnoticed while Connally was stripped naked, moved upstairs, and lifted from the stretcher, and then still going unnoticed while a nurse rolled up the sheets.

Here's another possibility. At about 2:50 into the Tomlinson video [embedded above], one can see that the pad slides easily across the metal stretcher. Suppose that when Connally was being lifted the pad was pushed all the way to the rail, covering the bullet -- until Tomlinson shoved the stretcher against the wall, the pad shifted again and out it came.

Works for me. Or as I like to say, "Shift happens"!

You know what they say about "great minds". .... ~grin~ .... Here's something I said in 2007 in this article/post that I entitled "The Odd (But Almost Certainly True) Journey Of Commission Exhibit 399":

"The bullet, now almost totally spent, travels its last few inches into Connally's left thigh, barely breaking the skin, but not hitting his femur beneath the skin.

The bullet is then jarred loose from the shallow thigh wound at some point, falling (probably) into his pants leg for a period of time...eventually ending up on his stretcher...where it rolls/slides under the stretcher's rubber mat (partially hiding it; hence, nobody sees the damn thing in the ER or in the OR).

It's quite possible that Connally's position on the stretcher at the time the bullet did its little dive under the mat was such that the weight of Connally's large frame possibly PUSHED UP a portion of the end of the rubber mat, leaving a gap between the metal stretcher and the mat. And when Connally was then removed from the stretcher, the mat (now free from the weight of Connally's body) falls flat and even again with the metal stretcher, covering (at least partially) Bullet #CE399.

Yes, that above scenario is just a guess on my part (quite obviously). But it seems like a fairly logical guess, given the sum total of evidence that indicates Bullet 399 DID, indeed, fall from Connally's thigh wound onto his stretcher while he was lying on that stretcher inside Parkland Hospital that Friday afternoon. And also given the fact that not a single person saw the bullet on the stretcher prior to Tomlinson (or heard the tinkling of metal rolling against the metal parts of the stretcher as it was being moved from the OR to the second-floor elevator area).

The stretcher (with bullet under mat) is pushed out of the 2nd-Floor Operating Room and into an elevator being operated that day by Parkland's Senior Engineer, Darrell C. Tomlinson.

Tomlinson takes the stretcher down to the first floor, where it's taken off the elevator and placed in the hallway next to young patient Ronnie Fuller's stretcher.

Tomlinson then returns to his elevator and hospital duties for a period of time....making at least 2 additional trips up to higher floors in the hospital before finally noticing that one of the two first-floor stretchers has been moved by someone who entered the men's room located off of that same hallway.

Out rolls Commission Exhibit #399, out from under the pad/mat on the stretcher, where it was partially hidden (or possibly completely out of viewable sight for a time)....and the never-ending controversy surrounding this little piece of metal and lead had begun."

Wow, you're right, David. I may well have read that in 2007 and by now didn't realize you'd thought of it first. Sorry. But I'm glad we agree.

I doubt that Tomlinson lied, but we have to keep in mind that the FBI was caught many times lying about what a suspect said. Even in this part of the case they lied. You might not be able to keep your dinner down, but there is evidence that was tracked down by Aguilar and Thompson that shows the FBI lying about the bullet in question:

The article has a great deal to do with the 'magic' bullet, and some of the shenanigans the FBI got into with it. Including breaking the chain of custody, and lying about the bullet and what witnesses said about it.

It hasn't been shown that the FBI lied, only that there are conflicts and gaps in the record which many CTs interpret as the FBI lying.

Tomlinson remembered it differently at different times. When he told Specter it was not the elevator stretcher, Specter said he'd told the SS that it was. Since CTs typically believe witnesses and doubt the WC/FBI, Specter has been accused of making that up. But now Pat has found a document showing that Specter was right, after all -- Tomlinson's story had changed.

The essay you linked to argues that since the authors couldn't find a specific FBI report about showing the bullet to witnesses, the FBI must have lied. That doesn't necessarily follow. Pat's discovery shows that not being able to find something doesn't mean it never existed.

Tomlinson told CT researcher Ray Marcus that he was shown a bullet by an FBI agent (he thought it was Shanklin) and that it "appeared to be the same one." [p.6 here].

"Appears to be the same one" is exactly how the FBI quoted him in CE 2011, the report that's supposedly a lie.

You shouldn't let suspicion fill in the blanks when there are other possibilities you may not have thought of.

I don't believe Pool was there. His testimony conflicts with Tomlinson's, and no one mentioned him. I think he's one of those would-be witnesses like Beverly Oliver who are either inserting themselves into the event or are mentally confused. That's my opinion.

In several places Tomlinson uses the word "we" when describing taking people up in the elevator.

"Prior to his discovery of the bullet, Pool recalls that he and Tomlinson gave another person a ride up to either the second or third floor."

Specter never asked him who "WE" were. If he had, the WC would have discovered the identity of the person who was working with Tomlinson.

So we have this dangling "WE" that needs to be resolved.

This is not my opinion, this is a fact.

Who did Tomlinson mean by "we" here:

Can't be Pool because Pool worked for an elevator company. He claimed that someone had called him to come over and operate the elevators.

Pool was probably there in the hospital on Nov. 22, but where's the proof he was right there by the stretchers when the bullet was found -- other than Pool saying he was?

Tomlinson's testimony has always been pretty clear on this point -- it was HE (Tomlinson) who first found the bullet on the stretcher. (Not on the FLOOR, which is the story I think Nathan Pool has told, but on the stretcher.)

RAY MARCUS -- "The bullet didn't actually fall to the floor, did it?"
DARRELL TOMLINSON -- "No."

And when you read Nathan Pool's testimony, make sure to pay attention to this remark made by Pool concerning the stretcher bullet he says he saw on 11/22/63: 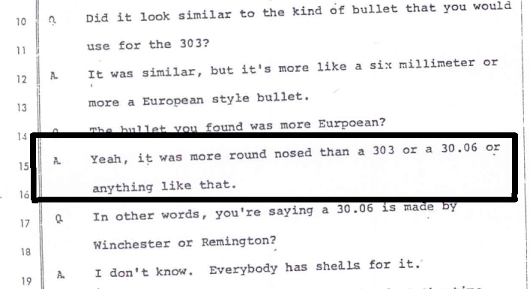 That's a quote that the conspiracy theorists must hate. They like the idea of the bullet being "pointy" in nature. But Pool says "it was more round-nosed".

I have doubts, however, that Nathan Pool was even there when Darrell Tomlinson found the bullet. But after looking over Tomlinson's very brief Warren Commission testimony once again, I now have fewer doubts about Pool being there than I did before. (And also after looking at Pool's HSCA testimony that Mike provided above.)

Nathan Pool could have indeed been there with Tomlinson when the bullet was first discovered. Tomlinson's Warren Commission testimony certainly doesn't eliminate the possibility of Pool being there too.

And if it could be proven that Pool was there when the stretcher bullet was found, then Pool's "round-nosed" quote would take on added significance.

There are, however, definitely some inconsistencies and contradictions in Pool's two interviews with the HSCA. In a telephone interview in January 1977, Pool described the bullet as "pointed". But in his longer interview with the HSCA in July 1978, Pool made the previously mentioned "round-nosed" comment. 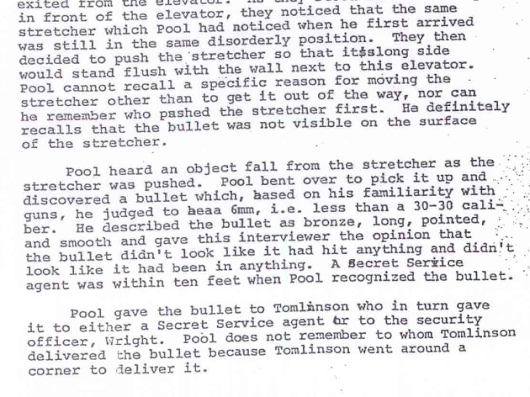 However, I suppose Pool's "pointed" and "round-nosed" remarks wouldn't necessarily have to be totally contradictory, because in his 1978 testimony/interview, he merely said that the stretcher bullet was "more round-nosed than a .303 or a 30.06". Which I guess could conceivably mean that Pool thought the bullet was sort of "pointed" at the tip, but not as pointed as bullets would be that were used in .303 and 30.06 rifles.

To read what author Vincent Bugliosi has to say in his book about Nathan Pool, CLICK HERE.