Obviously, if Connally is turned quite a bit to his right (~37 degrees), this is going to change any "midline" of JBC from the shooter's POV in the Book Depository. Oswald shot a TURNED-IN-HIS-SEAT John Connally, not a Connally who was sitting squarely in his seat with his shoulders parallel to the trunk of the car.

Another visual (via Dale Myers' "Secrets Of A Homicide" animation project): 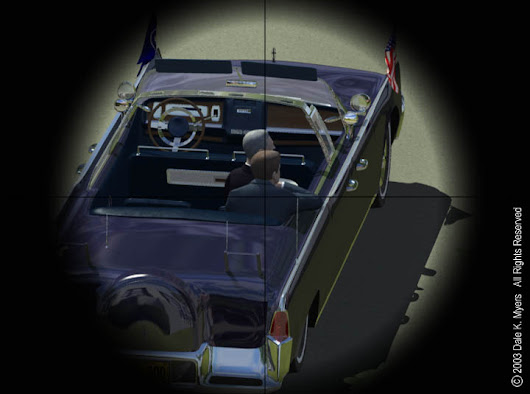 I can answer those questions (as can anyone else who has bothered to read the information available at Mr. Myers' website):

And Dale, of course, as everybody also knows, used the Zapruder film. Dale has, in effect, extracted 3-dimensional information from Zapruder's two-dimensional motion-picture film.

All of this is fully explained, in great detail, on Mr. Myers' site.

In short, the Single-Bullet Theory fits every last piece of physical evidence in the JFK case, including the Zapruder Film (to an absolute TEE it "fits" the Z-Film, without a shred of a doubt; CTer scoffing notwithstanding, naturally).

And, as I've shouted from the cyberspace rooftops a hundred times previously, to believe that the SBT is a falsehood is, by default, to believe in some kind of anti-SBT scenario to explain the simultaneous wounding of JFK and JBC that is inevitably far more illogical and unsupportable than is the single-bullet conclusion.

Why more conspiracists fail to realize that the above paragraph is 100% accurate can only make me shrug my shoulders incessantly in bewilderment.