THE BACK OF PRESIDENT KENNEDY'S HEAD
(PART 18)

>>> "I don't hear any comment from you about the pictures drawn by the autopsy and Parkland doctors. I don't hear anything from you as to how so many medical people who were 'on scene' at Parkland and Bethesda see one thing and YOU see another and say they're all mistaken." <<<

Any pictures hand-drawn by anybody are trumped by the REAL photos and X-rays of John Kennedy's body. You seem to want to believe that a picture drawn by somebody showing a gaping hole in the back of JFK's head [like this one] somehow trumps the real autopsy pictures and X-rays (not to mention the autopsy report).

That's called "NOT FOCUSING ON THE BEST EVIDENCE", Chris.


>>> "You can go to bed at night with that one X-ray under your pillow and it won't change the fact that there are breaks in the skull right where the autopsy surgeons say there was." <<<

But there's no missing skull bone at the back of the head. That's the key and principal aspect here, and that's because the Parkland people insisted there was a gaping HOLE in the right-rear of Kennedy's head -- i.e., there was MISSING SKULL BONE at the BOH. And the X-ray proves there wasn't.

Moreover, it's my belief that the X-ray of the right side of JFK's head proves that there was not nearly enough fracturing (fragmentation) of the rear part of Kennedy's skull to permit the Parkland witnesses to be correct about what they said they saw, even if we want to accept the preposterous (IMO) notion that a high-speed rifle bullet could have caused a huge blow-out at the rear of JFK's skull and yet leave the scalp that was attached to that very same skull totally undamaged (with several of the autopsy photos verifying that the right-rear scalp of JFK was, indeed, completely intact, without a hint of any damage being done to it by any bullet; and the higher-quality black-and-white picture shown below proves my "intact scalp" point even more). 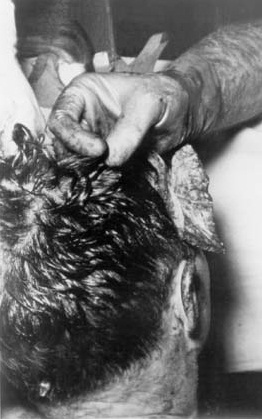 So, the idea that a bullet crashed completely through Jack Kennedy's right-rear skull and then just kind of pushed the scalp aside (without doing a bit of damage to that scalp) is something that doesn't make a bit of logical sense. If such damage was done to the right-rear of JFK's skull, then surely the scalp on top of that skull would have shown tell-tale signs of at least SOME damage too. And we know it does not.

Plus, Dr. Robert McClelland has always claimed that he was able to peer straight DOWN into the massive blown-out area of JFK's head at Parkland Hospital. But that notion is yet another weird aspect of McClelland's account. Because I'm wondering how he could possibly have been looking DOWN into a huge cavity that he said was located in the BACK of Kennedy's head, even though we know that the President was lying FACE-UP on the stretcher during the entire time Dr. McClelland was in Trauma Room 1 with JFK? Seems very odd to me.

And I wonder why that "looking down into the wound" aspect of McClelland's story doesn't seem odd or contradictory to any of the conspiracy theorists of the world. But, amazingly, it's not odd to them at all.


>>> "All the exhibits we've looked at have shown the clear, factual proof that there was indeed a large hole in the skull of JFK at Parkland (and thereafter)..." <<<

Sure, there was a hole in JFK's head -- at the right/front/top part of the head. And ONLY in that location. Noplace else. And that pesky X-ray that you insist on misinterpreting proves my point.

Talk about seeing things you want to see. You've got that ailment for sure, Chris. Because the reality is that NONE of the autopsy photos or X-rays show a "large hole in the right-rear". None of them. You're just making that up to fit your BOH theory. Because you've got ZERO pictures that show any "right-rear" hole in JFK's head. And you know it.

Plus, several of those autopsy photos you just mentioned (BE1-BE7, via the numbers utilized at this JFK-Lancer webpage) don't even show the right-rear of Kennedy's head at all!

BE1, for example, is a picture of the LEFT SIDE of Kennedy's head. The right half of his head isn't even visible in the picture at all. Nor is the right-rear of the head visible in BE2 or BE6 either. And BE7 (aka F8), as I mentioned previously, is essentially a worthless photo for the purposes of trying to orient anything on JFK's head.

And yet Chris thinks that those pictures (which don't even show the back of JFK's head) are proving that a big hole existed in the occipital area of his head.

I'm worried about you, Chris.

No need to be. But I'd be a little worried about your strange position regarding the things that those autopsy photos and X-rays are depicting. That's where your worry should be focused.

BTW, as I quoted previously, Dr. Baden and the majority of the other eight members of the HSCA's Forensic Pathology Panel (and probably all of the other eight, even Cyril Wecht), agree that there is no great-big hole at the back of JFK's head in the photos and X-rays.

"There was no defect or wound to the rear of Kennedy's head other than the entrance wound in the upper right part of his head." -- Dr. Michael Baden; January 8, 2000

Naturally, Chris thinks Baden is the same kind of kook that David Von Pein is.


>>> "I just don't want to believe that you are so locked into your fantasy that you can't for even a minute see what all these people have been telling you all these years." <<<

I've heard what they've been telling me. I just disagree with them. And I think I'm relying on the best possible evidence to prove that those Parkland witnesses were incorrect.

You, OTOH, are attempting to manipulate the autopsy photos and X-rays to suit your needs. You are doing pretty much the same thing John Canal has been doing for over ten years -- you are putting forth your own unprovable theories regarding those autopsy pictures and X-rays in order to try and reconcile those pictures and X-rays with the observations of the Parkland witnesses.

Unfortunately for you (and for John A. Canal), the autopsy photographs and X-rays are things that are written in stone (so to speak), and those pictures aren't going to change--ever. And they are providing a reasonable person with all the proof necessary to conclude that President John F. Kennedy did not have a large hole in the back part of his head after he was shot and killed in Dallas, Texas, on November 22, 1963.