THE BACK OF PRESIDENT KENNEDY'S HEAD
(PART 17)

>>> "It takes an open mind to realize that the scalp flap is flopping backward and not forward on the head. It explains every problem anyone ever had with the autopsy photos." <<<

For the purposes of this particular discussion regarding Dr. Robert McClelland's crazy "pulled scalp" theory, it makes no difference to me whatsoever whether any scalp was, in fact, being pulled forward by the Bethesda pathologists or not. That's immaterial here.

And it's actually immaterial even outside any "McClelland" discussion too. It doesn't matter. Because this autopsy photo and this X-ray (in tandem) are the absolute proof that Dr. McClelland mislocated the place on JFK's head where the large wound was. That fact couldn't be any clearer when viewing that photo and X-ray in conjunction with one another. And you can have your "pulled scalp" being pulled from any direction you want. I don't care. Because the photo and X-ray give me all the information I need in order to answer the following question:

Were the witnesses at Parkland Hospital correct when they said that President Kennedy had a big hole in the right-rear part of his head?

And after viewing the two pictures below, the answer to that question is crystal clear -- the answer is "No". 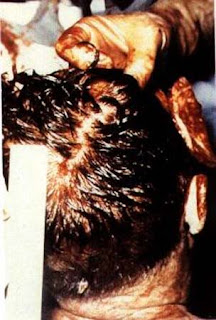 And, Chris, you can't possibly be serious about still contending that there was a great-big blow-out (with MISSING SKULL BONE) at the right-rear of Kennedy's head after viewing the above autopsy X-ray -- can you?

There is NO MISSING SKULL BONE in the occipital area of the head (per that X-ray). There are some fracture lines in the rear of the head, yes. But there's no missing bone there at all. None. The President's skull is essentially intact in the area where McClelland, et al, have insisted there was a HUGE SKULL DEFICIT. And the X-ray proves that fact.

Back to Dr. McClelland again for a moment:

The "scalp-pulling" thing is totally unimportant when it comes to assessing the major things that I'm trying to get you, Chris, to understand regarding Robert McClelland.

Because even if McClelland is correct and the doctors are pulling a piece of scalp forward on JFK's head in the autopsy photo, that still doesn't change the following two facts, which are things that Dr. McClelland certainly believes DO co-exist in the JFK case:

1.) The right-rear SKULL of JFK was blasted out by a bullet.

2.) The right-rear SCALP of JFK was left totally undamaged by the same bullet that caused #1 above.

Will you ever understand that those two things listed above ARE things that Robert McClelland actually does think exist (in tandem with each other)?

Or do you actually want to believe that a rifle bullet plowed through Kennedy's head, leaving a huge, easily-visible wound at the right-rear of the President's head (per McClelland and many other Parkland observers), and yet that same bullet (somehow, some way) didn't even touch the SCALP of the same man, even though that scalp we're talking about was located DIRECTLY ON TOP OF THE SKULL that McClelland says was blasted open in the occipital/right-rear?

Get it now? Or do I need to draw some more pictures to make you understand the absurdity of McClelland's position?

And to emphasize again -- This has nothing to do with pulled-up scalps, or the direction from which any scalp-pulling was done at Bethesda. This, instead, has to do with something very basic that McClelland said he actually believes. And
he made it clear on PBS-TV in 1988 that he does believe #1 AND #2 above.

[See Part 6 of this video series.]

McClelland didn't use the exact words I utilized above for my #1 and #2 items, but he believes those things nonetheless, because it's clear that he DOESN'T think the autopsy photos have been faked. Ergo, he knows (as I do) that the right-rear portion of President Kennedy's scalp was undamaged by any bullet that hit him on November 22nd, 1963.

Plus: Dr. McClelland's observations are completely blown out of the water and proven wrong by just the X-ray of JFK's head alone. Because we can see that the kind of damage that McClelland insists was present in the occipital/right-rear of JFK's cranium just simply does not exist in this X-ray.

Anyway, Chris, I'm glad that you also agree with McClelland that the autopsy pictures are not fakes. Most CTers love to harp on the "fake photos and X-rays" (even though the HSCA's photographic panel gave all of those autopsy pictures a clean bill of health in 1978, with the House Select Committee concluding that the X-rays and autopsy photos "had not been altered in any manner").

So, therefore, since you don't think the autopsy pics are fakes, I'm also glad to see that you can agree that there was absolutely no damage in the right-rear of JFK's scalp (i.e., there is no great-big hole there).

You surely agree with that last statement, right Chris? Since you think the autopsy pictures ARE telling the true tale of JFK's wounds, you don't think that this picture below is showing a great-big hole in the SCALP of Kennedy, do you?

And along those same lines, you surely don't think that the X-ray below is showing a great-big hole in the right-rear of Kennedy's skull, do you?

And if you can also agree with me that the above X-ray is not a faked X-ray, then how on Earth can you still maintain the validity and accuracy of Parkland witnesses like Dr. McClelland?