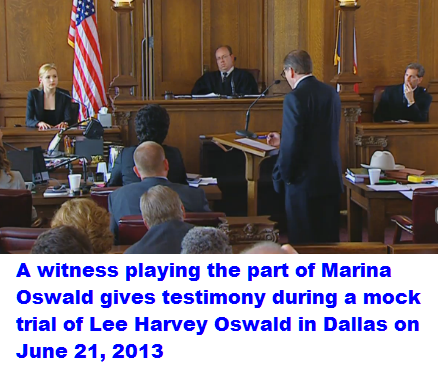 I was only able to see the last 1 hour and 45 minutes of the trial. So I missed the first hour. Evidently, they were attempting to squeeze the entire trial of Oswald into a 2-hour time slot, but they went over the time limit. It started at 2:00 PM CDT [Dallas time] on Friday, June 21st and ended at 4:45 PM CDT [5:45 PM EDT].

The latter portion of this particular 2013 mock trial that I saw, which was staged right there near Dealey Plaza in Dallas, was not very impressive at all. And I think it demonstrates the difficulty in trying to jam the entire JFK murder case into a short timeframe. There just wasn't nearly enough time to flesh out the whole case. There wasn't even time enough to present any closing arguments by the attorneys.

They even created a composite type of "jack of all trades" witness, a fictitious ATF agent named "Benton", who testified to all kinds of different things--such as firearms identification, handwriting analysis, and analysis of the Zapruder Film. I guess they figured it would save time to have this one witness testify to all manner of subjects.

I have no idea how many errors of fact occurred during the first hour of this mock trial, but the last 105 minutes contained several sloppy mistakes:

1.) Nobody even knew the proper location in the Texas School Book Depository where the rifle was found. The lawyers kept saying it was found in the northeast corner of the sixth floor, when, in fact, it was discovered by police in the northwest corner.

2.) It was stated that the Mannlicher-Carcano was a rifle manufactured for the Japanese Navy. (Huh?)

3.) Bill and Gayle Newman will be delighted to hear that one of their two sons has had a sex change operation, with one of their boys suddenly turning into a girl named "Abigail". :-)

4.) Marina Oswald testified for the prosecution, which very likely would not have happened at a real trial, since she was married to the defendant. I suppose we can always assume that Marina insisted on testifying against her husband here. Because I think that's the only way we'd have seen Marina on the witness stand at a real trial. (And does anybody REALLY think Marina would have voluntarily testified? I kind of doubt it.)

The defense had virtually no time to present its case, calling only two witnesses -- Carolyn Arnold and Gayle Newman.

The verdict: A hung jury. 9 votes for Oswald's guilt and three "not guilty" votes.

And the most hilarious part of this trial came as the judge announced the verdict. He originally declared Oswald "Not Guilty" (via the 9-to-3 split vote of the jury). Somebody then quickly corrected the judge, who then said that it was a hung jury and that Oswald would have to be re-tried. So the judge himself (who is a real judge in the state of Texas, Martin Hoffman) didn't even seem to know what a "hung jury" meant. He thought that a 9-to-3 split vote meant acquittal. Hilarious.

And one of the jurors was none other than Gary Mack. I can envision the conspiracy theorists having a field day with that decision to have Mr. Mack sit on that jury. I imagine they'll say it was just another part of the continuing "cover up" in this case to make sure Lee Harvey Oswald never gets a fair trial (even a mock one).*

Another one of the twelve jurors was Dr. Robert McClelland, who was one of the doctors who attempted to save the life of the mortally wounded President Kennedy at Parkland Memorial Hospital in Dallas just after the President was shot on November 22, 1963. McClelland represented one of the three "Not Guilty" votes.

Now, why on Earth Gary Mack and Bob McClelland were asked to serve on that jury is a mystery. There was virtually no chance of getting anything but a hung jury with those two men sitting in the jury box. Given their past history and beliefs concerning the Kennedy murder case, Mack's going to vote the defendant guilty and McClelland is going vote not guilty. So the jury's hung right there.
[I was wrong.*]

All-in-all, a pretty poor "trial" of Lee Harvey Oswald. But maybe the first hour, which I did not see, was more compelling. However, I do feel sorry for anyone who has the task of cramming all the facts surrounding President Kennedy's assassination into just 2 hours and 45 minutes. That's kind of like trying to whittle "War And Peace" down to 26 pages.

Dave, I wish you would do research first before coming to a conclusion.

At the beginning (which you missed), the presiding judge instructed all of us to disregard everything we may have learned or heard about the assassination and reach a verdict based solely on the evidence presented by the prosecution and defense....which is what real trials do.

Based on that, I voted Not Guilty. The prosecution showed a very weak case and the defense put up enough reasonable doubt that the decision was easy. It didn't matter that history says every major investigation concluded Oswald killed JFK, the evidence presented to us didn't convince me Oswald was in that window with a rifle.

Gee, when the lawyers prosecuting Oswald can't even get Gary Mack to vote Guilty, it must have been a lousy job of prosecuting indeed. And yet even with such a subpar performance by the prosecution team, nine people on the jury still voted to convict Oswald. That's rather interesting, isn't it?

My apologies to Gary Mack for jumping the gun. But knowing what Gary's opinion is concerning Lee Harvey Oswald's guilt in the JFK murder case, it just never occurred to me for even half a second that Mr. Mack would have been one of the three people who voted Not Guilty at the mock trial in Dallas on 6/21/13. I'm very surprised.

If I had been in Gary's place on that jury, I doubt very much that I would have been able to vote Oswald "Not Guilty" (unless perhaps the prosecutor didn't show up at all). But, then too, with the strong opinion that I hold about Oswald killing President Kennedy, I would have asked to be removed from the jury before the first witness ever opened his mouth.

The above list of mistakes is just a short list. I wasn't taking notes, and I could have added about a dozen more things that the witnesses and lawyers got wrong during the mock trial in Dallas. I just can't remember all of them off the top of my head.

One other mistake I do recall is the purported length of Oswald's rifle. One of the lawyers said the rifle was 39 inches. Oswald's Carcano was, of course, 40.2 inches long. Not a major error, no. But something like that is just as easy to get right as it is to get wrong.

I suppose some people will look at this discussion about the mock trial and say: Oh, you lone-assassin nuts are just being super nitpicky about these details. What difference do those details make?

And I suppose to some extent I can agree with that type of reaction. But to those of us who know a lot of the details about the assassination, seemingly small and insignificant mistakes always stand out like sore thumbs. And if I would have been able to watch the first sixty minutes of the 6/21/13 mock trial, I probably would have noticed several more gaffes.

BTW, the only reference to J.D. Tippit's murder I recall hearing in the last half of the trial was when Oswald himself mentioned the killing of a police officer when LHO's midnight press conference was played for the jury.

Perhaps the Tippit crime was severed from this trial entirely. But if it was, why was the jury allowed to hear Oswald himself talk about the murdered policeman? (Another mistake by the attorneys perhaps?) ~shrug~ **


** "Evidence of Oswald’s same-day murder of Dallas police Officer J.D. Tippit was not allowed to be heard by the mock jury." -- Dale K. Myers

The reporter who appears in the video below and who posted this silly "Not Guilty" article [which is no longer available to read] on the WFAA website (Jason Whitely) is not stating the verdict accurately at all. Oswald was not declared "Not Guilty" by the mock jury. It was a hung (or deadlocked) jury, 9-to-3 in favor of Oswald's guilt. Which means it's a mistrial. It certainly wouldn't mean Oswald would just walk out of the courtroom that day a free man. What a farce. 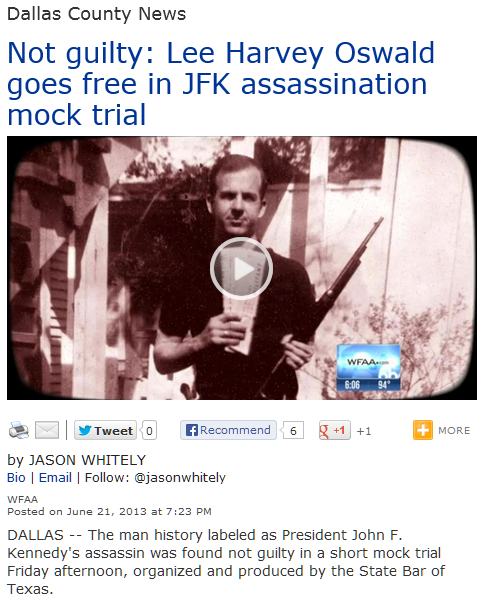 At 10:46 PM CDT (11:46 PM EDT) on June 21, 2013, the author of the above-linked WFAA.com article, Jason Whitely, changed the title of the article from "Not Guilty" to "No Verdict", and Jason also removed the "Not Guilty" quote within the body of the article as well. But Jason still has it wrong even with the revised title. Lee Oswald is not "free" after a jury reached "No Verdict", unless we're to actually believe that the prosecutor in the case would be so stupid as to just throw up his hands and decide to NOT retry Oswald a second time on the same murder charge. And how likely is it that that scenario would have occurred in a case where it's the accused killer of the President of the United States who is on trial? Care to try again, Jason? :) 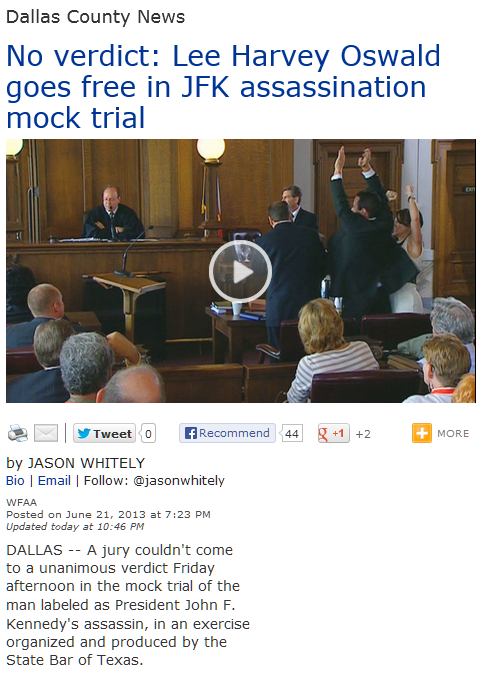 As the hilarity mounts, here's version #3 of Jason Whitely's title for his WFAA.com article (this one must be the "illiterate version"): 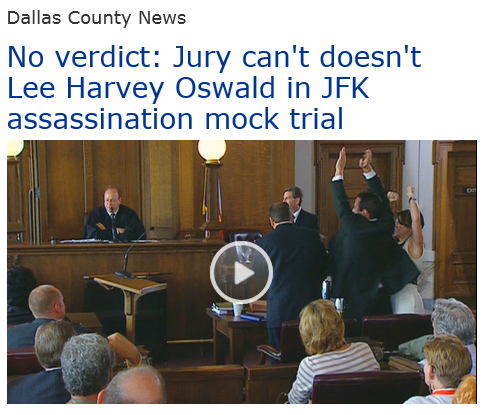 Here's version #4 (this one should be the last--I would think): 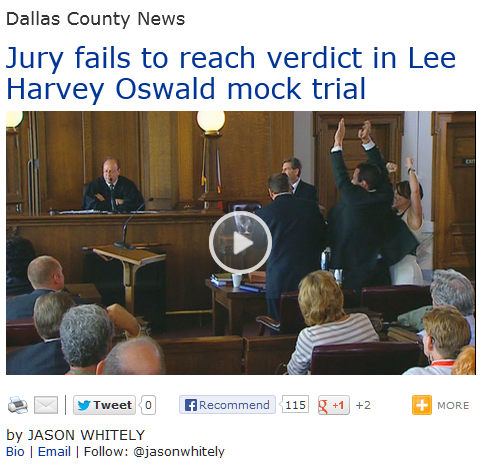 For some much better "mock trials" featuring Lee Harvey Oswald as the defendant, check out the three links at the very bottom of this post.

HIGHLIGHTS FROM THE 2013 MOCK TRIAL: