There were two rulings before the WFAA trial that were interesting. First, Marina [Oswald] was allowed to testify, which would not have happened at a real trial back then. That hurt the defense. But the prosecution made the right call in not allowing the Tippit case to be dragged in. That was important and correct.

See, in 1986, Bugliosi was, for whatever reason, allowed to bring in the Tippit case to court. Spence did not even object to it! And the judge, who slept through most of the proceedings, did not say one word.

I pretty much agree with DiEugenio's comment about Marina Oswald, but the Tippit subject is a different matter. Yes, it is possible that at a real trial (had Lee Harvey Oswald lived to see one) J.D. Tippit's murder might have been excluded (as it was at the mock trial held in Dallas on June 21, 2013, and therefore the jury would not have been allowed to hear any of the evidence that proves Oswald killed Officer Tippit.

On the other hand, it's also quite possible (or even likely) that the Tippit murder would have been allowed at Oswald's real trial, given the obvious potential connection that exists between JFK's murder and Tippit's slaying.

The prosecution could reasonably argue (just as Vince Bugliosi did at the 1986 mock trial) that the murder of Officer Tippit by Oswald showed flight from the scene of the JFK murder. The umbilical cord that exists between the two murders (which were committed just 45 minutes apart) is virtually undeniable. And the court/judge would have certainly taken that into account had Oswald really been on trial for JFK's assassination.

And the following video clip tends to indicate that the Tippit crime could very well have been introduced by the prosecution at a trial in which Oswald was accused of killing President Kennedy. Granted, this clip is also merely from a "mock" trial (Larry Buchanan's "Trial Of Lee Harvey Oswald", filmed in 1964), but this same argument could certainly have been made by a real prosecutor at a real trial too:

But then, at the end, Bugliosi used the Tippit murder to prejudice the jury against Oswald in the Kennedy case! He called it Oswald's "signature murder" proving he killed JFK. Yeah Vince, some signature. You cannot even prove he ever had possession of the handgun.

Now, if there was ever one single individual quote by Jim DiEugenio that would tend to prove that he is totally crazy when it comes to things associated with the murders of JFK and J.D. Tippit, it's probably the last ridiculous and outrageously wrong sentence in the quote above. Let's look at it again:

"You cannot even prove he ever had possession of the handgun."

Talk about someone being in complete denial of the facts. DiEugenio proves it above. The above quote is nothing but an outright lie.

Lee Harvey Oswald was arrested in the Texas Theater with the Tippit murder weapon in his own hands (i.e., he was in "possession" of that gun just 35 minutes after Tippit was murdered with that same gun).

And yet DiEugenio, who would do anything it seems to keep from admitting that Oswald killed anybody on 11/22/63, wants to insult everyone's intelligence by suggesting that Oswald was never in possession of the Tippit murder weapon
at all on November 22nd.

DiEugenio couldn't care less about the truth. He wants Lee Harvey Oswald to be innocent of killing both John F. Kennedy and J.D. Tippit. That fact couldn't be more obvious after taking just one look at DiEugenio's laughable quote above.

Coincidence: I am writing about the 1986 mock trial right now for my Hanks/Bugliosi book. Sat through the whole five hours over two days. In addition to dragging in the Tippit case, Bugliosi called twice as many witnesses as Spence. Both sides ended up calling what are proven liars today. Bugliosi called Guinn and Spence called Tilson.

More preposterous nonsense from the lips of James "I'm Going To Bash Bugliosi No Matter How Silly I Look In Trying To Do So" DiEugenio. And of all the witnesses for DiEugenio to call a liar, he chooses Vincent Guinn? Weird.

Dr. Guinn, of course, didn't tell a single lie at the 1986 mock trial in London, England. He testified to his belief that two (and only two) bullets struck the victims on November 22, 1963. And the totality of OTHER evidence that exists in the JFK murder case most certainly bolsters Dr. Guinn's Neutron Activation Analysis tests (even if those tests are less reliable now than they appeared to be when Guinn did his NAA tests on the bullet evidence in the Kennedy case in 1977 and 1978).

But Jimbo DiEugenio surely could have chosen a bigger "liar" than Dr. Guinn. After all, Jimmy has all of these witnesses to choose from when it comes to picking out alleged "liars" who testified at the '86 mock trial (and Jimbo has, at one time or another in the past, called most of these people liars--either directly or indirectly):

And, btw, DiEugenio's allegation that defense witness Tom Tilson lied is wrong too. Tilson didn't "lie". He told the truth as he saw it during his testimony at the docu-trial in July 1986. Now, Tilson was most certainly wrong about what he said he saw. But, in my opinion, he wasn't lying. He thinks he saw Jack Ruby in Dealey Plaza at the time JFK was shot. That's provably wrong. But to Tom Tilson, it's the truth. Ergo, Tilson isn't a "liar".

Bugliosi said in his opening statement that Oswald fired a shot from behind that went through JFK's skull, exiting and shattering the front of his head. Spence did not object. I sure would have: Mr. Judge, that is a demonstrable fabrication by the prosecution. Please show us what his grounds are for saying that.

The truth is the opposite of course. It blew out the back of his head. Good going Vince.

The whole thing was a joke, which I am giving a real rip to in my book. I cannot really blame Spence. I mean he had three months to prepare. I mean, three years would have been more like it.

I see Jim DiEugenio has decided to remove himself from reality once again.

But, of course, back here in what we call "reality", any objection that Gerry Spence would have made following Vincent Bugliosi's telling the mock jury in 1986 that President Kennedy was shot in the head from behind (with the exit wound in the head being located to the right-front of the President's head) would have been overruled by the judge. And that's because the fact is:

The only physical evidence that exists regarding JFK's head wounds indicates that Bugliosi's argument to the jury was absolutely 100% correct -- the entry wound in Kennedy's head was in the rear and the large exit wound was located toward the right-front-top area of his head.

There can be no denying these facts, as the autopsy photo and X-ray shown below fully illustrate (plus the Zapruder Film too, which most definitely shows the large wound of exit to be located in the RIGHT-FRONTAL area of JFK's head). 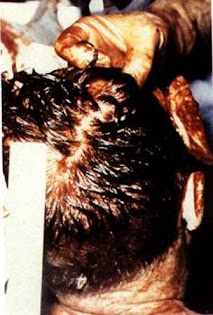 And yet DiEugenio actually thinks that it's Bugliosi who was lying by telling the jury "a demonstrable fabrication" at the '86 docu-trial.

In other words, DiEugenio is, in effect, saying this -- To hell with the evidence! Those autopsy pictures are fakes! The autopsy doctors were liars! The autopsy report is a lie! The Clark Panel was full of liars! And the HSCA's Forensic Pathology Panel was filled with more liars! In short, the wounds are where I want them to be and that's that!

James DiEugenio, of course, is a nut. And a nut doesn't deserve to be taken seriously. 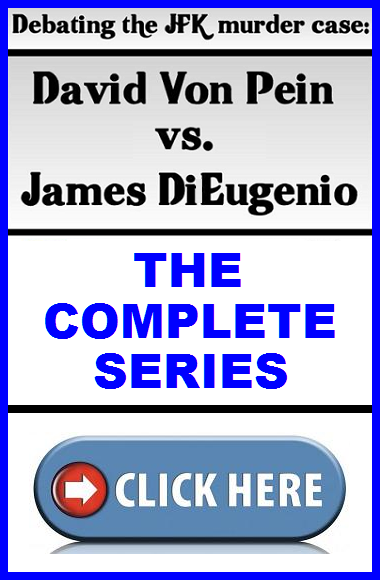