Once again, the exact timing of Oswald's post-assassination movements
will never be known for sure. We can only guess. But if you want to
tack on an extra 8 or 10 seconds to Howlett's time, feel free.

But while doing that, keep in mind that Oswald almost certainly was
moving FASTER than Agent Howlett was moving during those
reconstructions that were done several months later.


>>> "What about the Dillard photo of the east window that shows a figure in the window, shot 30 SECONDS after the head shot." <<<

Tom Dillard's photo shows no such "figure". That's your overactive
CTer imagination at work there. I've seen the "enhanced" blow-ups. I
see no human figure.

It's funny you didn't mention the WEST-end window, too. Because many
CTers, including Robert Groden (the photo "expert" who was ripped to
shreds at the O.J. Simpson civil trial), think there's a guy (with a
HUGE head evidently) visible at the WEST-end window on the sixth floor
of the Book Depository about 30 seconds after the shooting.

But, yes, I've also seen the colored-in enhancements done of the EAST-
end (Oswald's) window too, with some CTers believing there's a person
visible at the east end as well.

When a person starts coloring in all sorts of stuff in black-and-white
photographs, sure, you can probably see a "man" in almost any photo
you want to see one in.

Take this ridiculously overdrawn "Badge Man" photo for instance
(below). I see Elvis wearing big glasses and holding a microphone in
this picture too. But nobody else does. I wonder why? 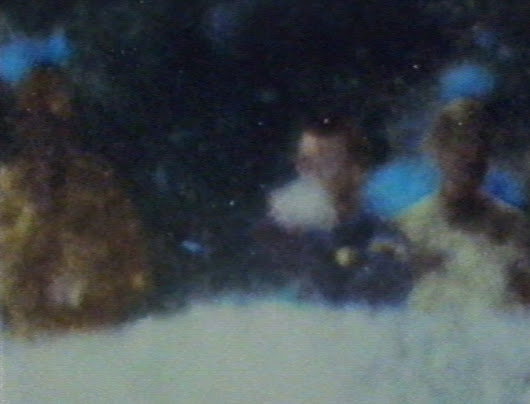 >>> "What about Lillian Mooneyham's testimony that she saw a person in the east window 3 minutes after the head shot?" <<<

That's a perfect example of how human beings fail to estimate TIME
very well. Let's take witness J.C. Price as another example. He
thought the gunshots were--get this--possibly as much as FIVE MINUTES
apart! (See what I mean?)

Plus: What kind of idiot/boob plotters and assassins were in Dealey
Plaza on November 22 anyhow? They shoot JFK from different guns and
different directions in the Plaza (per most CT accounts of the event),
even though their single "patsy" is supposed to be in the Depository
ONLY (obviously).

And now, per Mooneyham, a gunman (or surely somebody who was part of
the "plot") decides he'll hang around the "window of death", in full
view of witnesses, for THREE minutes after the shooting???

How can a reasonable person think that Mooneyham actually saw an
ASSASSIN (or even an assassin's helper) in any window three full
minutes after the assassination (assuming her time estimate is spot-on
accurate, that is)?

In a few words -- No reasonable person could possibly believe such a
crazy thing.


>>> "Sorry, David. Oswald WAS coming from the first floor, and that's the only way Baker could have seen him coming through the vestibule." <<<

Bull. You've utilized your own selective pro-conspiracy interpretation
of these things to arrive at your ONE AND ONLY way it could have
happened, while completely ignoring the best evidence and ignoring
common sense.

In short, you cannot micro-analyze the movements of two men whose
EXACT, TO-THE-SECOND timelines can never be known. Period. And yet you
still insist that you can do this with ultra precision. I can only
scratch my cabeza and wonder....why?


>>> "You have a timing issue, David. And it favors Oswald's innocence and you offer no counter." <<<

I only have a "timing issue" if I choose to totally ignore the VERY
BEST EVIDENCE (the SUM TOTAL of all the evidence, that is) which tells
any reasonable person that Lee Harvey Oswald was, indeed, the lone
assassin of President Kennedy.

Allow me to quote from Mr. Bugliosi's book (yet again). He said it in
fine fashion when he wrote these words on page #953 of "Reclaiming
History":

"Once you establish and know that Oswald is guilty, as has been done,
then you also NECESSARILY know that there is an answer (whether the
answer is known or not) compatible with this conclusion for the
endless alleged discrepancies, inconsistencies, and questions the
conspiracy theorists have raised through the years about Oswald's
guilt." -- Vincent T. Bugliosi