>>> "On page 25 [of "Reclaiming History"], he [Vincent Bugliosi] describes the Presidential limousine: Weighing about seventy-five thousand pounds with its special build and heavy armor..." <<< 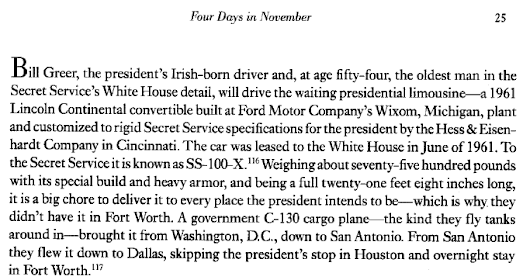 That's just one of the many errors made by Anthony Marsh in his
ongoing 99,000-page Internet volume entitled: LET'S CONCENTRATE ON
MEANINGLESS CHAFF DAY-&-NIGHT AND NIGHT-&-DAY.

I think Vince did make a mistake there indeed. I've always been under
the impression that no portion of JFK's limo [SS-100-X] was armor-plated
prior to 11/22/63.

And via the two source notes that VB provides on Page 25 of his book
relating directly to the "armored" issue ["2 H 66, WCT Roy H. Kellerman;
2 H 129, WCT William Robert Greer"], the word "armor" does not appear
on either of those two WC pages of testimony.

So, yes, it appears that Vince did make an error when he said "heavy
armor" on Page 25.

Okay. So, with that small error being revealed, let's move on to
Anthony Marsh's next chaff-happy gripe about Vincent T. Bugliosi's
very good book....


>>> "Again on page 25: [Quoting Mr. Bugliosi, despite Mr. Marsh failing to put in any quotation marks at all, just like the previous VB quote mentioned by Mr. Marsh above:] There is also an electrical system, operable by the president [sic] himself provided the top is down, to raise that seat and its footrest by as much as eight inches from their normal positions. [/VB quote off] .... BUZZ. Wrong again. The documents show that it could be raised 10-1/2 inches." <<<

BUZZ. Wrong. At least you're wrong based on the source note provided
by Bugliosi regarding this point, which is a source note that points
to this citation: "2 H 129, WCT William Robert Greer".

Bugliosi got the "8 inches" figure directly from the Warren Commission
testimony of Secret Service Agent Bill Greer, where Greer specifically says
the following about the mechanical nature of the rear seat of SS-100-X:

So, Greer was certainly of the opinion during his 1964 WC session that
the rear seat could only be raised 8 inches, not 10-1/2 inches.

Perhaps other sources regarding the rear-seat mechanism do, indeed,
indicate that the seat could be raised higher than the eight inches
indicated by Agent Greer. I do not know.

But I do know this -- the above detailed reference to the exact number
of inches that the rear seat of Limo SS-100-X could be raised, plus
the details regarding the exact weight of the car ("seventy-five
hundred pounds"), are things that indicate to me that author Vincent
Bugliosi was doing an excellent job of digging deep into the Warren
Commission volumes while searching and verifying trivial little facts
like the two mentioned above.

And my guess would be that Mr. Bugliosi probably didn't think it was
altogether necessary to look BEYOND the testimony of Secret Service
agent Bill Greer in order to double- and triple-check relatively trivial
details like the exact weight of the President's limousine and the
precise number of inches the rear seat could be raised.

Yes, Mr. Bugliosi strives for accuracy as much as possible. I'm sure
that's true. But with so many details and ultra-trivial facts being
revealed in VB's "Four Days In November" chapter of his book
"Reclaiming History", I would expect to have a few small details and
facts ending up slightly off the mark.

In fact, I myself have amassed my own list of such minor errors that
pop up in "RH" (via this this September 2007 Internet post).

So, yes, there are some minor errors in Vince Bugliosi's massive publication.
There are bound to be some errors like that in a work that immense. But
none of the errors that appear within the 2,800+ total pages of VB's book
amount to a hill of beans when it comes to the final "LONE ASSASSIN"
conclusion reached by Bugliosi in "Reclaiming History".

If you'd like to start a battle of "errors" within certain books relating to
JFK's assassination, I'm quite sure I could dig deep into a couple of
conspiracy-slanted volumes that I have on the shelf and provide quite
a list of errors and omissions and outright distortions that reside within
those conspiracy publications.

But, I guess Tony thinks Bugliosi's bottom-line "LHO DID IT ALONE"
conclusion should be tossed out the window because of a potential
2.5-inch error made by VB regarding the back seat of the President's car.
(Even though, as I mentioned before, Vincent's "error" there really
isn't an error at all, based on the Greer citation provided by Source Note
#118 on Page 25 of VB's book.)

The above blatant exaggeration is simply laughable.

"Thousands of such errors and lies", eh?

Geez, looks like Tony's been busy micro-analyzing VB's book for the
"thousands" of "errors and lies" that rest within its covers. (But,
perhaps Tony really meant to say "hundreds" instead of "thousands"?
Kind of like the mistake he made when he said "thousand" earlier in
his post. ~shrug~)

On this "[sic]" point, I fully agree with Tony Marsh. I think that the word
"President" should always be capitalized. Vince Bugliosi, though, never
capitalizes that word in his JFK book (unless the word is immediately
followed by the actual name of a certain President).

Technically-speaking, however, spelling the word "president" with a
lower-case "p" is not incorrect at all (if the President's name
doesn't immediately follow it, that is):

So, at least Tony Marsh can't throw all of the evidence against Lee Harvey
Oswald out the window based solely on Vinnie's use of a lower-case "p"
on occasion. (Whew! Thank goodness for that.)