A SHORTCUT TO BECOMING A
LONE-ASSASSIN BELIEVER


QUESTION --- WHAT IS ONE OF THE BEST WAYS TO GO ABOUT THE TASK OF DEBUNKING MOST OF THE MAJOR JFK CONSPIRACY THEORIES (WITHOUT REALLY TRYING TOO HARD)?

ANSWER --- WATCH (OR LISTEN TO) THE ORIGINAL LIVE TELEVISION AND RADIO COVERAGE FROM 11/22/63.

AND THEN TRY TO PUT YOURSELF INTO THE SHOES OF THE SO-CALLED "PLOTTERS", WHO (PER MOST CONSPIRACY THEORISTS) HAD JUST SHOT PRESIDENT JOHN F. KENNEDY FROM MULTIPLE LOCATIONS WHILE USING TWO OR MORE GUNS.

YOU'LL THEN FIND YOURSELF SAYING (AS I HAVE) -- "THIS STUFF DISHED UP BY OLIVER STONE AND COMPANY IS JUST FLAT-OUT KOOKY!" 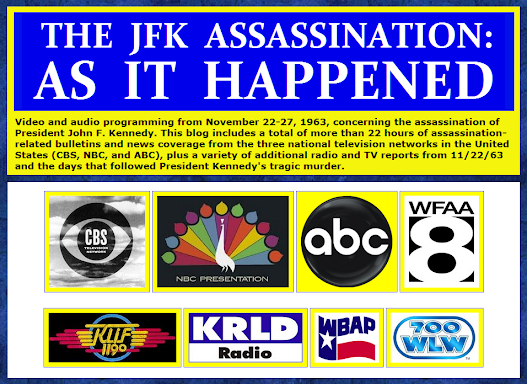 To those JFK conspiracy theorists who seem to favor the Oliver
Stone-like or Robert Groden-promoted assassination scenarios (that
feature a minimum of three gunmen and anywhere from 6 to 15 gunshots
being fired at President Kennedy in Dallas' Dealey Plaza on November
22, 1963) -- I always suggest to them that they ought to dig up some of
the originally-aired "As It Is Happening" live TV or radio broadcasts
from that dark Friday in American history.

After performing that exercise of watching a few hours of the November
22 television coverage of the assassination (in real time), or
listening to some of the radio broadcasts in real time (which works
just as well) -- I challenge anyone to then arrive at the same
conclusion that was slapped up on the big theater screen in 1991 via
Director Oliver Stone's blockbuster, conspiracy-laden motion picture
"JFK".

Watching the day's events unfold "live" in front of you (or listening
to them unfold on the radio as it was happening) should, in my opinion,
provide everyone with a good general idea of how utterly impossible a
task it would have been to have "faked" so much stuff that was being
IMMEDIATELY reported to the world on live television and radio within
minutes and hours of the President's assassination (and within a very
short space of time following Police Officer J.D. Tippit's murder as
well).

Via those original live TV/Radio broadcasts, you're not going to hear a
SINGLE report that resembles anything close to the Oliver Stone/Jim
Garrison-endorsed nonsense of:

What you will hear, instead, is live coverage, as it happened, of a
ONE-GUNMAN assassination taking place from where the majority of
witnesses said it took place (the Texas School Book Depository
Building), with no more than three shots having been fired by the
single shooter, which is a shot count that over 91% of the witnesses
concur with -- including the small percentage of witnesses who heard
only one or two shots, who are witnesses that certainly don't do Mr.
Stone's "6-shot ambush" theory any favors.

Upon evaluating virtually all of the TV networks' live assassination
footage from November 22nd, 1963, there is no possible way that a
reasonable person could arrive at a conclusion that JFK was shot by
three assassins, firing from both front and rear. Let alone arriving at
an even more-cockeyed conclusion, as purported by Mr. Groden and some
other CTers, which is an outlandish conspiracy-flavored scenario that
has John Kennedy and John Connally being shot by way more than just the
two Warren Commission-backed Mannlicher-Carcano bullets from Lee Harvey
Oswald's rifle.

Very nearly all of the information being reported on TV and radio that
November day favored a "Lone Assassin" shooting scenario (including the
info concerning the Tippit murder in Oak Cliff), with very little
evidence and information to support any type of a "conspiracy"
whatsoever.

This is quite a telling "One Killer" fact. Because, in my view, if a
vast conspiracy and subsequent "cover-up" had been in place on November
22nd (given the immense amount of TV and radio coverage, with reporters
scrutinizing everything coming across their desks and digging hard for
any type of case-solving clues during those first hours and days after
JFK and J.D. Tippit were killed), I think that at least SOME pieces of
the conspiracy would have leaked through to the sweeping television and
radio coverage surrounding the two Dallas murders.

And I'm guessing that every reporter and newsman in the country would
have loved to dig up some "conspiracy"-oriented angle during that
weekend in November of '63. Being the person who uncovered such a huge
story would certainly be a feather in that reporter's cap, to be sure.
But, as it turned out, nothing of that nature occurred....and has yet
to occur all these many years later.

To think (as many theorists do) that these conspirators were so smart
and so quick to have had the capabilities to immediately eliminate
virtually every last scrap of information leading to a conspiracy plot
of some kind, making sure that none of the "multi-gunmen shooting
event" details seeped through to the media (multiplied by TWO separate
murders as well, counting Tippit's!), is to think that any such
evil-doers had powers similar to "Superman".

For example -- Almost every one of the initial reports concerning the
number of gunshots heard by witnesses stated "3 shots". And while it's
true that the very first report of the shooting from UPI's Merriman
Smith (which was broadcast over all the television networks) stated
"Three shots were fired...", it's also worth noting that Smith's
initial bulletin was not the ONLY "three-shots" account that was
reported during those early hours just after the shooting.

For instance, Jay Watson of ABC affiliate WFAA-TV in Dallas (who
happened to be in Dealey Plaza during the shooting and nervously
reported the first bulletins to the unaware Dallas TV audience) is
heard multiple times on November 22 saying he heard "3 shots" fired.

Plus, several other members of the media are also on record stating
their own PERSONAL beliefs that exactly three shots were fired by the
assassin, including Robert MacNeil, Jack Bell, Bob Clark, Jerry Haynes,
and Pierce Allman, among still others.

Could these ultra-clever conspirators have somehow managed to
"manipulate" several reporters who were relaying the news live to the
world immediately after the event, and have them ALL report on hearing
just "three shots" (or, in a few cases, hearing just TWO shots, which
is a number that certainly does not favor a "Multi-Shooter Conspiracy
Plot")?

Which, per Oliver Stone's movie, would mean that a full 50% of the
ACTUAL number of gunshots were somehow inaudible to the enormous
majority (91%+) of the earwitnesses! And, remember, Oliver has NONE of
the shots within his movie's six-shot assassination ambush being
"synchronized" in order to merge together with the sound of some of the
other shots.

And yet, per Mr. Stone, we're supposed to actually believe that
approximately 9 out of every 10 witnesses somehow missed hearing HALF
of the gunshots fired that day! A reasonable thing to believe....or
not? I ask you.

Were these so-called conspiratorial shooters so good that they could
make 4 to 10 shots sound like only three to the vast majority of
witnesses scattered all throughout Dealey Plaza? Highly doubtful, to
say the least.

Again....watch the live TV footage....or listen to some of the
surviving 11/22/63 radio tapes....and then try to find a multi-gunmen
conspiracy lurking within any of those original broadcasts.

This link offers up a great "Live" example of what I'm talking about. It
contains over an hour's worth of footage from Dallas radio station KLIF,
beginning at 12:35 PM (Dallas time) on the afternoon of Friday,
November 22, 1963.

I challenge anyone to try and locate even a hint of a multi-gun conspiracy
within that radio footage. Do conspiracy buffs think that all of these KLIF
news reporters were "in" on some kind of massive conspiracy plot and an IMMEDIATELY-IN-PLACE "cover-up" operation too? That would be a good
question for conspiracists to ask themselves as they listen to that live radio
coverage.