How did the rifle get in the building if Frazer didn't drive it from Irving?

Buell Wesley Frazier, of course, did drive the rifle from Irving to the TSBD on 11/22/63. That fact couldn't be more obvious. And it's also obvious that the bag found on the sixth floor could easily hold Oswald's disassembled rifle, as this side-by-side photo amply illustrates (the caption of the FBI photo is slightly off when it says that the blanket was found in "Oswald's garage"; it should say Ruth Paine's garage, of course; that is one of dozens of errors made by the FBI during its haste in preparing its 12/9/63 report): 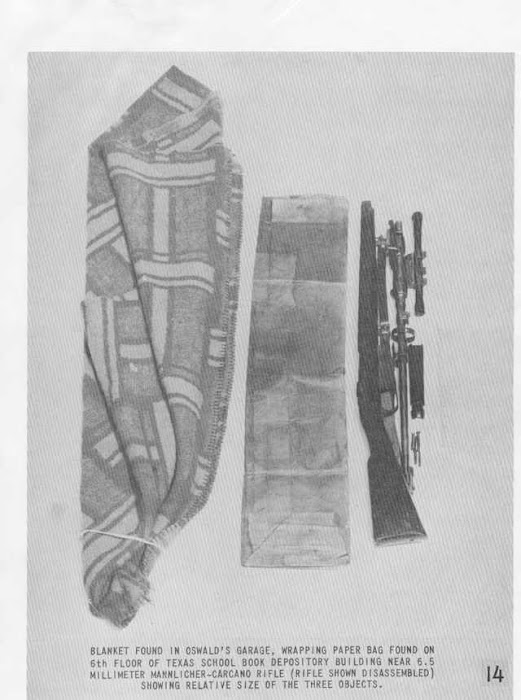 Ergo, Wesley Frazier was simply in error about the bag's length.

VINCE BUGLIOSI -- "Is it true that you paid hardly any attention to this bag?"

BUELL WESLEY FRAZIER -- "That is true."

BUGLIOSI -- "So the bag could have been protruding out in front of his body and you wouldn't have been able to see it, is that correct?"

Tell us, William Kelly, how did Oswald's prints get on that 38-inch paper bag (CE142) if he didn't handle it at some point prior to the assassination?

How did the rifle get from Dallas to New Orleans and back again if Oswald didn't take it with him on the bus?

The rifle was almost certainly transported back to Dallas from New Orleans via Ruth Paine's station wagon. No mystery there at all. So why create one?

Who was that man in the window when Oswald was with Baker and Truly on the second floor?

There was nobody in the Sniper's Nest window during that time. You surely aren't relying on Lillian Mooneyham's observations about seeing a person in the window several MINUTES after the shooting, are you? The idea that any assassin would just be hanging around the sniper's window (to be easily seen from the outside) for several minutes after having just shot the President is just crazy and everybody knows it.

Mooneyham's times are off--which couldn't be a more common mistake made by witnesses. Another perfect example being Earlene Roberts' estimate of "3 or 4 minutes" for Oswald staying inside his closet-sized room on 11/22, even though Roberts herself contradicted her own "3 or 4 minutes" timeline when she also said that Oswald was in his room "just long enough, I guess, to go in there and get a jacket and put it on". Does that activity usually take a person three or four minutes to accomplish?

Did that man leave fingerprints on the boxes, which were moved around while he was there - as the photo evidence proves?

Well, there was no "man" in the window several minutes after the assassination. But anyway, I do know that OSWALD'S fingerprints and palmprints were on two of the boxes that were located deep within the Sniper's Nest.

Stated another way -- Lee Harvey Oswald's fingers touched the same boxes that were utilized by the person who fired a rifle at President Kennedy.

Do the math. It isn't rocket science--or even 10th grade algebra. It's 1st grade 2+2 arithmetic. You're just looking for an excuse to throw away some very incriminating evidence that corroborates and solidifies all of the other "Oswald Was Here" stuff that is also on the table.

But go ahead and play defense attorney for Oswald if that's your desire. But I doubt a jury would buy it (especially when that same jury considers whose gun deposited those three empty cartridge cases that were lying just a few inches away from Oswald's prints on those boxes).

How many fingerprints are on the boxes besides Oswald's (and Malcolm Wallace's) and the Cops?

I see you've fallen for the myth about Malcolm Wallace's prints being on the TSBD boxes. Of course, Wallace's prints were not on any of those boxes, because the only unidentified print on ANY of the TSBD boxes (per Commission Exhibit 3131) was a palmprint, not a fingerprint. The Wallace thing is a hoax. Simple as that.