The video above contains rare videotape footage of President Kennedy's trip to San Diego, California, on Thursday, June 6, 1963, including Air Force One's arrival at Lindbergh Field and the President's motorcade through the streets of San Diego.

Also included are portions of JFK's speech at San Diego State College and video footage from the Marine Corps Recruit Depot, where the President speaks again and is given a 21-gun salute.

A personal note --- This San Diego video is rapidly becoming one of my all-time favorite JFK videos. It emits the same "live" and "as it is happening" qualities that can also be found in my videos of President Kennedy's appearances in Texas on the day he was assassinated (November 22, 1963).

This San Diego video features the same airplane (SAM 26000) that flew JFK to his death in Dallas, plus the same limousine and the same pomp and circumstance that surrounded Kennedy's visit to Texas in November of '63.

And how can anyone not jump a little bit when hearing gunfire (the Marine Corps' 21-gun salute) just as the President steps off of a helicopter in this San Diego video? It's almost impossible not to think of Dallas and November 22nd at that moment.

And take note of the similarity between the San Diego and Dallas motorcades. The same basic configuration of the cars and police motorcycles is readily apparent in the clips presented in this San Diego parade, with no Secret Service agents riding the bumper of Kennedy's car and no military aide sitting in the front seat between the Secret Service men--exactly the same as in Dallas' Dealey Plaza on November 22nd.

This is, in my opinion, truly a classic video. My thanks go out to the people who rescued this videotape footage from the dustbins of history (source listed below). It is a program I am certain to revisit many times in the coming years.

Thanks so much for posting this. People today don't realize that fifty years ago, when the president came to town, the local stations pulled out all the stops to provide comprehensive coverage. One major difference between the San Diego coverage and Dallas' was that in San Diego, even portions of the motorcade itself were broadcast live, as well as the use of a portable camera at the airport. Thanks again for posting this.

Another winner! You keep finding great material. Keep up the awesome work David!

I was one of the people lining the streets in San Diego that day to see the motorcade. The police motorcycle formation was different--in San Diego there was a "flying wedge" of motorcycles in front and to the side of the presidential limousine, but in Dealey Plaza, the motorcycles stayed behind, with no front or side protection. Also, in San Diego, there were military vehicles preceding the limousine, but in Dealey Plaza, just one lead car, way out in front, with no frontal protection.

There was also a "flying wedge" of motorcycles in Dallas, just like in San Diego. In another one of my videos, you can even hear Joe Long of KLIF Radio, as he reported live from Love Field on 11/22/63, talk about the "flying wedge" (he even uses those exact words, which can be heard at the 22:08 mark in the video below:

I still maintain that the Dallas protection and security was virtually identical in all key respects when compared to this San Diego parade. No substantial differences whatsoever when it comes to "security measures".

Thanks David for another great video. As always, your analysis of JFK's standard motorcade formation is spot on. Only wish more viewers would open their eyes to the pattern.

Also notice the truck full of photographers in front of the limo, which didn't happen in Dallas. Also, in Dallas they kicked the official WH photographer out of the Queen Mary.

Regardless of where the photographers were located, the "security" was identical in both of those motorcades (San Diego on June 6 and Dallas on November 22), unless some conspiracy theorists would like to suggest that the photographers and cameramen were supposed to perform double duty in Dallas--taking pictures and serving as human shields to protect JFK at the same time.

Do conspiracists really believe the photogs and cameramen were deliberately placed further back in the Dallas motorcade in order to avoid filming the "conspiracy in action" in Dealey Plaza? Utter nonsense.

Plus, we know that there WERE multiple professional cameramen who filmed the action in the Plaza within seconds of the assassination--e.g., Mal Couch of WFAA, Dave Wiegman of NBC, and Tom Dillard of the Dallas Morning News. Plus
Jim Altgens of AP and the many amateur photographers who took pictures DURING the assassination itself.

And I want to once again rub the CTers' noses in this comment I made on YouTube:

"The same basic configuration of the cars and police motorcycles is readily apparent in the clips presented in this San Diego parade, with no Secret Service agents riding the bumper of Kennedy's car and no military aide sitting in the front seat between the Secret Service men--exactly the same as in Dallas' Dealey Plaza on November 22nd." -- DVP; August 2013

I wonder what conspiracy believers like Vince Palamara think about the above-mentioned Dallas/San Diego similarities? I'm sure Vince will just ignore the fact that there was no military general riding in the front seat of JFK's car in either San Diego or Dallas. Nor do we see any SS agents riding JFK's bumper.

The June 6th San Diego video, all by itself, pretty much destroys several different conspiracy myths concerning the Dallas motorcade and the B.S. about a Secret Service "standdown" and "security stripping" in Dallas.

But, then too, perhaps some conspiracy clown can now start a new theory about how the San Diego video has been altered in order to digitally remove the SS agents who were continuously riding the bumper of Kennedy's car in San Diego.

With people like Ralph "All Photos Are Fake" Cinque examining the case, nothing would surprise me anymore.

I proudly posted the San Diego video on my blog recently.

San Diego -- Hundreds of Marines lined the streets, along with police, facing the crowd; the building roofs were manned as the procession passed; SAIC BEHN was on the trip, etc.

Of course, agents were not always on/near the rear of the limo- the police and/or military lining the streets, facing the crowd, as well as the building rooftops being guarded as the motorcade passed, more than compensated for this (manpower) situation -- that is the key.

And, yes, these were normal occurences ***BEFORE*** Dallas. Chief Inspector Michael Torina, whom I spoke to and who wrote the Secret Service manual, confirmed these facts. I would say he was slightly an authority on the matter (just slightly...).

People like [Gerald] Blaine, a buck private who served briefly, have little authority on the matter, especially in comparison to Torina, a giant in the Secret Service, to put it mildly. See? The gotcha game Marsh has been playing with photos on these newsgroups is laughable on its face. Security was not always "in your face" and overt...out of necessity, it was covert, as well (a good example being D.C. motorcades).

Unless I've missed some sparring between Vincent M. Palamara and Anthony Marsh in some other newsgroup threads (which is certainly possible), it looks like Vince is complaining to the wrong person. Marsh was taking YOUR side, Vince, when he said this:

"Also notice the truck full of photographers in front of the limo, which didn't happen in Dallas. Also, in Dallas they kicked the official WH photographer out of the Queen Mary." -- T. Marsh

But my main point on this security issue is still a perfectly valid one -- and that is: the security we see in Dealey Plaza, Dallas, Texas, on 11/22/63 is substantially the same security that we see in San Diego on June 6th -- e.g., no military aide in the front seat of JFK's limo; no Secret Service men riding the bumper of Kennedy's car; two SS agents on each of the running boards of the SS follow-up car; motorcycles flanking the President's car--two cycles to the left-rear and two to the right-rear.

All of that stuff is identical in both of those motorcades. And even if there weren't some extra Marines (or policemen) lining the streets in Dallas PRIOR to Dealey Plaza -- so what? JFK wasn't killed on Main Street or on Cedar Springs or on Lemmon Avenue. He was killed on Elm Street.

Now, we can argue all day long about how the Secret Service and the Dallas Police Department blew it by not stationing more men to guard Elm and Houston Streets in Dealey Plaza. But that's merely Monday-morning quarterbacking, to be sure.

Since Dealey Plaza was at the very end of the parade route, and since the crowds were, indeed, much thinner in Dealey Plaza than they were on Main Street (and probably on Harwood and other streets as well), a large police presence right in Dealey Plaza itself was probably not deemed necessary by the Dallas Police or Sheriff's Department. (Even though, ironically, the Dallas County Jail is located right there on Houston Street.)

But hindsight is always 20/20 and is never wrong. If, however, we let our hindsight guide our thinking (and our theories) regarding JFK's security measures in Dallas on November 22, 1963, we are playing right into the hands of the looniest of the conspiracy theorists who seem to want to believe that the security measures taken in Dallas were so lax and so inept (on purpose!) that JFK had no hope of making it to the Trade Mart alive.

But such conspiratorial thinking is just not reasonable or rational. The bottom line is that the security surrounding John F. Kennedy's limousine as it drove through Dealey Plaza on 11/22/63 was absolutely identical in nature to the security that JFK received while riding in that very same open-top car dozens of times prior to visiting Dallas.

And, in my opinion, even if a considerable number of extra policemen had been lining the streets in Dallas, it still would not have prevented Lee Harvey Oswald from poking that rifle out of that sixth-floor window at exactly 12:30 PM CST and murdering President Kennedy.

Plus, I'll also add this:

We know that the Dallas Police went to great lengths to protect JFK in Dallas. It's not like Jesse Curry's police department was just sitting around on its hands when Kennedy came to Dallas. In fact, NBC reporter Robert MacNeil said this on the NBC Radio Network shortly after 10:00 AM (EST) on 11/22/63, three-and-a-half hours before JFK was assassinated in Dallas:

"Police in Dallas have mounted the biggest security operation in their history to prevent any repetition of the demonstrations which marked the visit of U.N. Ambassador Adlai Stevenson last month."

And there's also this 11/20/63 message to the people of Dallas from the Dallas Police Chief himself (Jesse E. Curry):

Also -- I'm guessing that the reason there was such a large "Marine" presence on the streets of San Diego for JFK's visit on 6/6/63 is because there were HUNDREDS OF MARINES AT THE READY AT THE MARINE BASE THERE IN SAN DIEGO, for use as extra security men during Kennedy's drive through the city.

There was certainly not a huge "Marine" or military presence lining the streets for EVERY single motorcade JFK ever drove in during his 1,037 days in office. That's just silly. 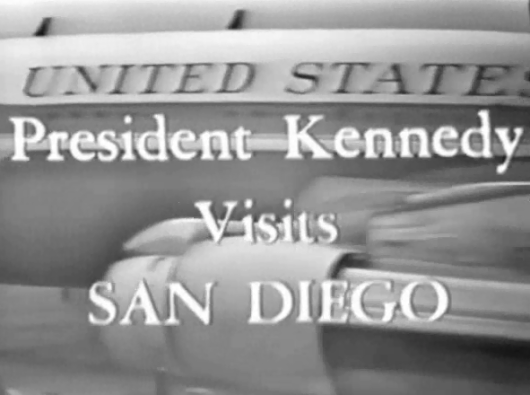 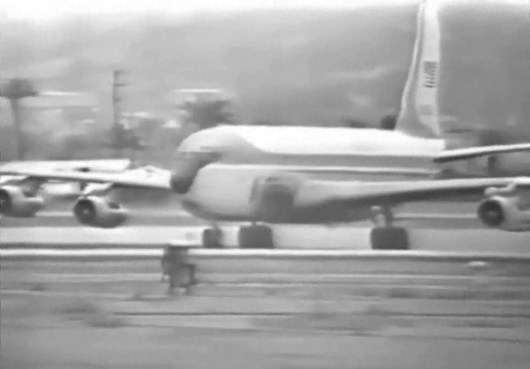 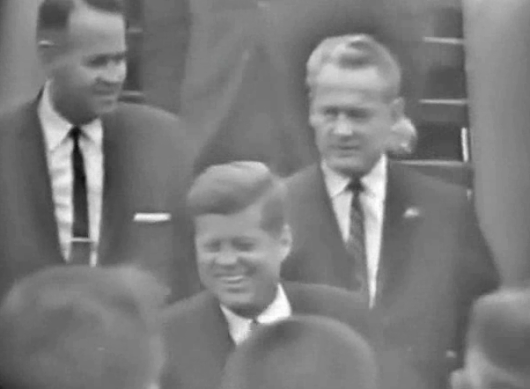 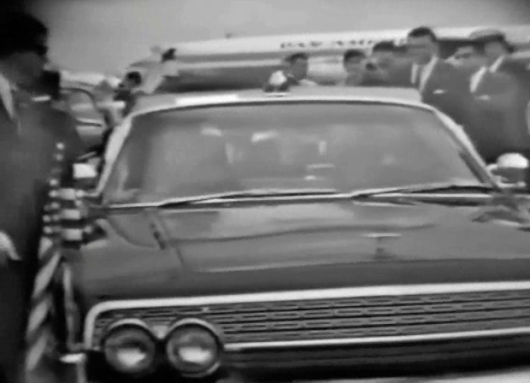 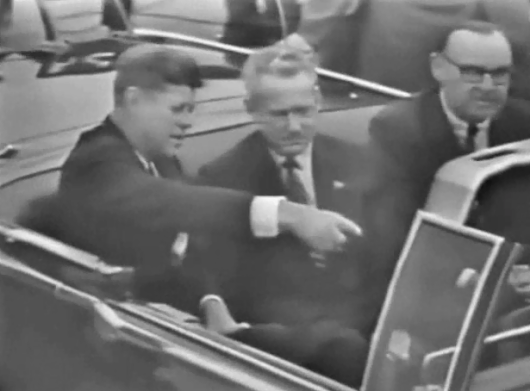 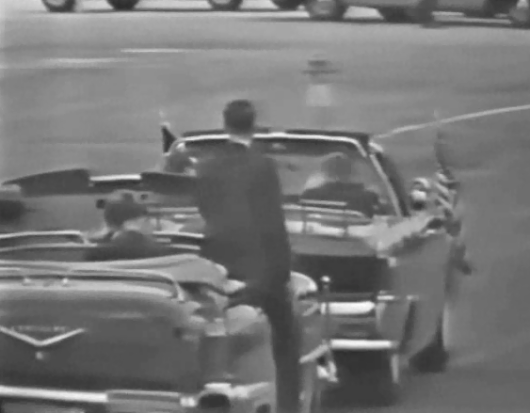 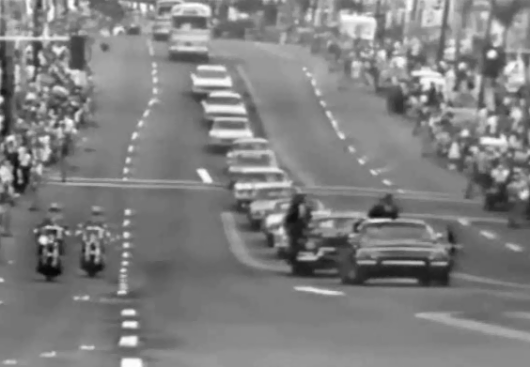 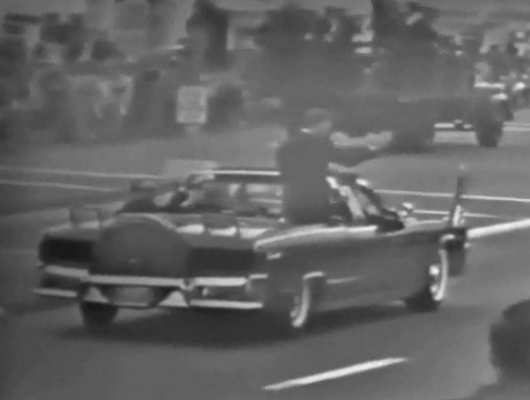 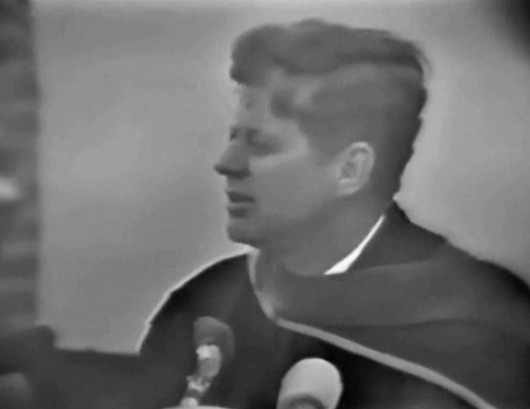 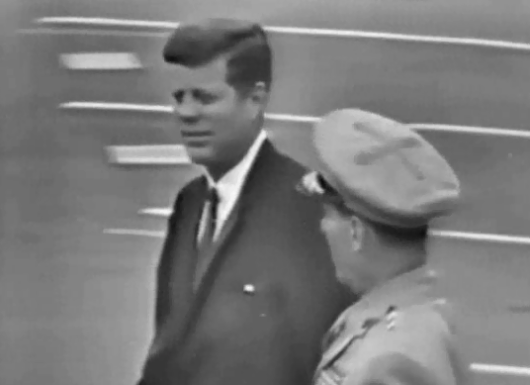 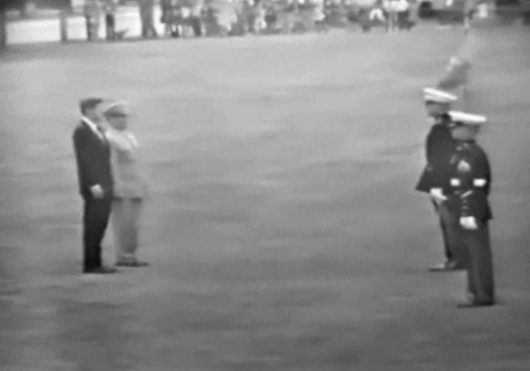 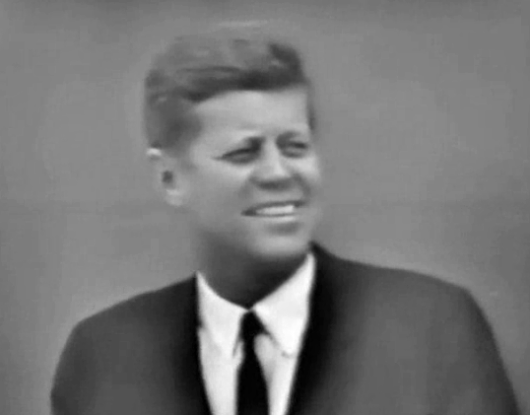 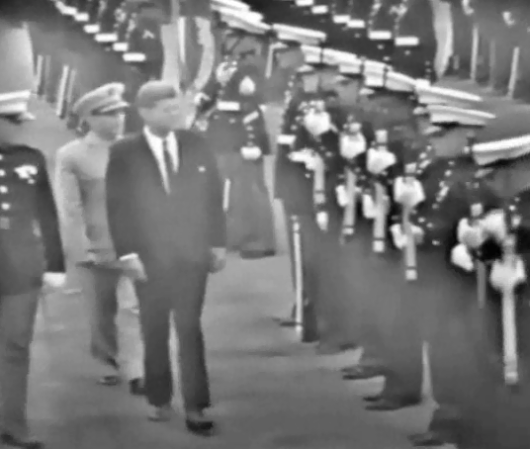 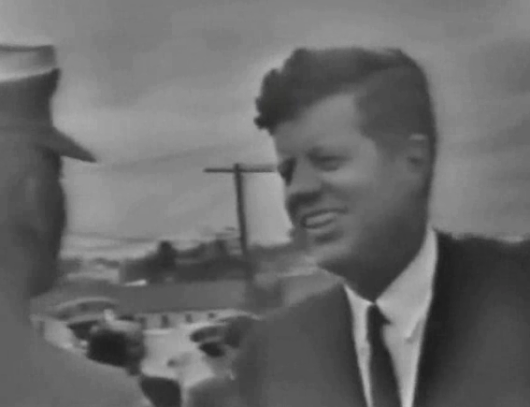 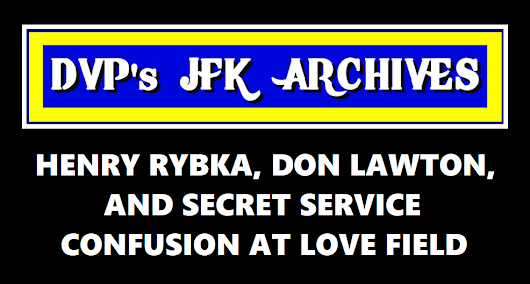