What a steaming pile of BS.

What [is] with that screaming guy saying we had Oswald in our office ten days ago.

Who was that supposed to be?

This actually looks even worse than the script I critiqued in my book.

When Jim DiEugenio, on August 22, 2013, said "what a steaming pile of BS", he was referring to this trailer for the Tom Hanks-produced film "Parkland", which is an upcoming theatrical motion picture based on Vincent Bugliosi's 2008 book "Four Days In November" (which consists of the first huge chapter of the 2007 book "Reclaiming History", Bugliosi's much longer publication about the JFK assassination).

The thing that strikes me as particularly hilarious about DiEugenio's "what a steaming pile of BS" remark is that Jim made that remark about a movie trailer that contains absolutely nothing that even a hardened and devoted JFK conspiracy theorist should think is "BS".

The 2-and-a-half-minute trailer for the "Parkland" film (embedded below) depicts a few scenes that could only be deemed factual in nature--even if you belong to the same kooky fraternity that DiEugenio belongs to -- that being the "Anybody But Oswald" conspiracy club.

I guess Jimbo thinks that the scene in the trailer featuring the "screaming guy" is a valid reason for labelling the trailer (and hence, the whole "Parkland" motion picture) "a steaming pile of BS".

But Jim D. should have easily been able to figure out what that "screaming guy" scene is depicting in the film. It is obviously a scene depicting actors who are portraying FBI agent James Hosty and his boss, Dallas FBI agent-in-charge Gordon Shanklin.

A portion of that same scene will also undoubtedly include Shanklin screaming at Hosty to get rid of the note that Lee Harvey Oswald brought to the Dallas FBI office in early or mid-November of 1963, shortly before Oswald assassinated President Kennedy on November 22nd. That's what that "screaming guy" scene is all about, Jimmy. Isn't it obvious? It sure was obvious to me the first time I watched this trailer:


Is there really anything in the above trailer that could have possibly caused a conspiracy monger like DiEugenio to blurt out this remark (even apart from the Hosty/Shanklin exchange I just talked about above, which Jim apparently didn't understand)?:

"This actually looks even worse than the script I critiqued in my book."
-- J. DiEugenio

If there is anything in that trailer that would (or should) cause such a strong negative reaction by a conspiracy theorist, I sure can't figure out what it might be.

There are probably a few lines of dialogue spoken by the nurse or the man talking to Marguerite Oswald or by Billy Bob Thornton (who plays Secret Service agent Forrest Sorrels) that have likely been embellished for the film (for "dramatic license" purposes), but I can't see how such benign embellishments would be so upsetting to even a conspiracy believer.

Jim DiEugenio, of course, knows that Tom Hanks' film "Parkland" is based on
Vince Bugliosi's lone-assassin book, and therefore Jim knows that the movie is, indeed, going to come to the conclusion that Lee Harvey Oswald, alone, shot and killed JFK and policeman J.D. Tippit. But based on just the trailer by itself, I cannot see why any conspiracist would be compelled to say that the trailer was "a steaming pile of BS".

I can just imagine how big that "steaming pile" is going to be once DiEugenio sees the entire film.

In the final analysis, of course, people like James DiEugenio are simply nuts when it comes to their half-baked theories and cockeyed beliefs concerning the assassination of John Kennedy. And now I see where Jimbo can't even manage to critique a short movie trailer properly. He sees nothing but "BS" in a two-minute trailer that--in actuality--contains nothing but true facts. Go figure.


I see Jim DiEugenio has now decided to attack Tom Hanks with some pretty severe criticism. Jimbo doesn't seem to care who he slanders, as long as it's somebody who has some common sense about Oswald's guilt in JFK's murder.

DiEugenio has evidently done a few weeks' worth of "research" on Mr. Hanks and his movie career, and Jimbo has now decided that Hanks is a "complete jerk". Jimmy D. is pathetic (of course).

Mr. Hanks, btw, is said by many people in Hollywood to be one of the nicest individuals in the whole movie business. Now, I'll admit, I have no idea if that appraisal of Tom H. is spot-on accurate or not. I've never met the man. But I have heard several people say a lot of good things about Tom Hanks.

Naturally, Jimmy D. thinks Hanks is a "complete jerk" because of Tom's stance on the JFK case. And now I see where DiEugenio is going to attack Vince Bugliosi some more on another non-JFK topic too -- the Manson case -- as Jimbo will apparently be making an attempt to smear Vince in some way regarding Bugliosi's prosecution of Charles Manson for the 1969 Tate-LaBianca murders.

So, if he can find a way to attack and smear Hanks and Bugliosi, he's evidently going to do it in his 2013 book "Reclaiming Parkland", which probably would be better suited for the supermarket tabloid magazine rack than it would be for the mainstream book-buying public. 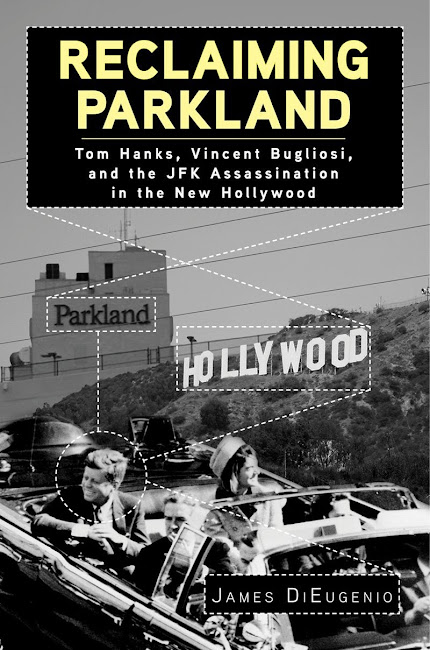 An alternate title that would very likely fit the 500 or so pages of trash talk that are likely going to be inside DiEugenio's book would be: "Smearing Two Good Men For The Price Of One Crappy Book".

I cannot say with any authority what kind of Hollywood-type gossip and/or "dirt" DiEugenio has dug up about Tom Hanks, but I can say with some degree of authority that James DiEugenio is dead wrong about many of the things he says about Vincent Bugliosi. And I can say with absolute confidence that DiEugenio is totally wrong (and even nuts) about almost everything he believes regarding the JFK and J.D. Tippit murder cases.

Jimbo has proven to me time and time again in my online debates with him that he has virtually no capacity for properly and reasonably evaluating the evidence that exists in the JFK and Tippit cases.

And anyone who thinks I've overstated my criticism of DiEugenio's weak capacity for rational evidence evaluation in the Kennedy case only needs to glance at a few of these articles.