Walt says he wants an "honest and open debate" regarding the JFK
assassination. That's hilarious, coming as it does from Walt, a person
who completely ignores and/or mangles virtually all of the evidence
surrounding this case (including J.D. Tippit's murder too).

Walt interjecting the word "honest" into his thread title is almost
too funny for words. As we all know, Walt is the one who decides who
is "honest" or not with respect to everything associated with the
official evidence in the JFK case. And anyone who has ever pointed a
finger of guilt in Lee Harvey Oswald's direction was "dishonest"....just
because Walt (an "honest" man) has said so.

Here are some examples of Walt's "honesty" (IOW, an example of the
bullshit he's invented without a stitch of evidence to support such
crap). All of these are verbatim quotes from the e-lips of "Honest
Walt" (aka: one of the most despicable conspiracy clowns ever to utilize
a computer keyboard).....

"David Belin did a good job of twisting Brennan's testimony."

"Belin twisted the events that happened BEFORE the shooting to make it look like Brennan was talking about what he saw DURING the shooting."

"Belin cleverly did not provide a photo that showed the entire face of the TSBD as it appeared at 12:30 on 11/22/63. He gave Howard Brennan photos that showed only windows on the upper east side, forcing Brennan to use those photos to depict the events he witnessed."

"There are also photos which show a rifle protruding from that window BEFORE the motorcade arrived....But there was NOBODY in that [southeast sixth-floor] window at the time of the shooting."

[DVP INTERJECTION -- LOL time. But at least Walt's being "honest" when
it comes to the massive amount of hard evidence that he's flushing
right down the toilet with respect to a rifle being fired from
Oswald's Sniper's-Nest window on November 22, right Walter? He'll just
ignore or skew every last speck of that evidence. A nice "honest"
approach by Walter, isn't it?]

"If the truth be known, the gunman was probably planting the spent shells when Brennan saw him."

"Do you think that Howard [Brennan] was hallucinating??.....That the 35-year-old, 175-pound gunman who was dressed in a WHITE shirt and trousers was merely a figment of his imagination?"

"There WAS a 35-year-old, 175-pound man, dressed in a white shirt and trousers, visible in that window just a few minutes prior to the shooting."

[DVP INTERJECTION -- Walt again thinks he can place such exactitude on
such things as "age" and "weight" and even "clothing", all the while
mangling the actual words uttered by Howard Brennan. Lovely "honesty"
once more, eh?]

"He [Howard Brennan] DESCRIBED the location where he saw the gunman aiming the rifle from the window, and he did NOT describe the window on the EAST end of the sixth floor."

"I believe the so-called "Sniper's Nest" was nothing more than a hidden "Smoker's Nook" that a TSBD employee had constructed so that he could goof off and smoke without being seen by the boss."

[DVP INTERJECTION -- The above brainstorm of Walter's, uttered
on August 6, 2006, deserves some extra attention from those "LOL"
initials once more.]

"There's no doubt about it.....Howard Brennan saw a man who was NOT Lee Oswald on the sixth floor of the TSBD. He saw him in the partly open S.N. window BEFORE the motorcade arrived, and he saw him firing a rifle from a WIDE OPEN [window] during the shooting."

[DVP INTERJECTION -- "There's no doubt about it", folks. That's
because Walt is an "honest" person when it comes to fairly and
reasonably evaluating and assessing the physical evidence in the case
and the testimony of one Howard Leslie Brennan. Right, Walt?]

"The Croft photo...shows a tiny piece of JFK's white shirt being blown out through his suit jacket by the exiting bullet. .... The bullet hole in JFK's jacket is EXACTLY where the tiny piece of white shirt appears in the CROFT photo [shown below]. .... The bullet was a TINY (perhaps 55 grain) .22 caliber bullet. A bullet this size will lose its energy very rapidly. .... Therefore, after passing through JFK's body, it's [sic] energy was pretty well spent. When it passed through one of the grill openings [of the SS follow-up car] and struck some metal behind the grill, it didn't have much more energy than a BB fired from a BB gun. It simply fell into the area behind the grill of the Caddy."

[DVP INTERJECTION -- The above is a good example of a kook's
imagination run amok in Dealey Plaza. Walt thinks JFK suffered a
"throat-thru-back" bullet wound at approx. Z161 on the Zapruder Film. 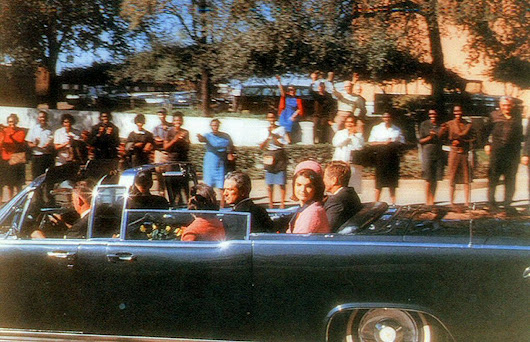 Can Walt's "honest", fair, and reasonable approach to President Kennedy's
injuries possibly get any more idiotic than in his quote above? And yet
Walt expects people to be open and respectful to such moronic and
unsupportable bullshit like that. He actually seems to think that such
utter nonsense ISN'T worthy of being ridiculed. Go figure.]

"Everyone can have a theory about why Tippit was there and why he was killed. .... The one thing we can be sure of is Oswald was NOT the killer."

[DVP INTERJECTION -- This completes the "Anybody But Oswald" circle
for "honest" kooks like Walter. Not only is Lee Oswald completely
innocent of shooting President Kennedy in Dealey Plaza per these
nutcases like Walt, but the "ABO" kooks also want to have the
obviously guilty Oswald innocent of Officer Tippit's murder as well.

It's so "honest" of Walt to tell us to totally ignore that pile of
"LHO Killed Tippit" evidence, isn't it? Just toss it out, says
Walt....including the Tippit murder weapon, which every kook's
favorite patsy had ON HIM when arrested just a half-hour after
Tippit's murder.]

Don't ya love watching a researcher approach the JFK evidence in an
"open" and "honest" manner like Walt has done via the "Kook Kwotes" I
have provided above? Just lovely isn't it?

I can "honestly" say this without fear of embarrassment --- Walt is an
"honest"-to-goodness idiot when it comes to his forum posts regarding
the murders of John F. Kennedy and J.D. Tippit.