David, in the autopsy photo you display, can you explain the complete blacking out of the back of the head, where all the Parkland witnesses said the wound was?

The back of JFK's head has not been blacked out, Ray. It merely looks darker in that area of the head due to the angle of the picture and the fact that Kennedy's head is tilted back in that photo. But there are other autopsy photos that clearly show each individual hair on Kennedy's head in the right-rear area of his head that you seem to think shows a "complete blacking out" in the photo depicting the back wound.

The photos below are not as high quality as the first-generation prints that reside at the National Archives, but the two pictures on the left show no "blacking out" of the head, with JFK's hair plainly discernible:

Plus, there's also this X-ray, which is in perfect harmony with all of the other JFK autopsy photos, with this X-ray proving for all time that President Kennedy did NOT have a big hole in the back of his head (despite the many Parkland and Bethesda witnesses who said otherwise). There's not a bit of MISSING skull bone in the back (occipital) portion of the head here:

In addition, here's the GIF clip put together by John Mytton (below), which verifies the "stereo" nature of two of JFK's autopsy photos (the "red spot" color picture, plus one of the black-and-white photos of the back of the President's head). And JFK's hair is easily visible in the so-called "blacked out" area at the right-rear of the head:

Now don't tell me you think ALL of the above photographs and the X-ray are phony, Ray. You don't really believe that....do you?

Take a look at this very clear version of Zapruder Film frame 317....and notice the complete lack of an injury (or any blood even) at the BACK of President Kennedy's head. There's no wound in the rear of the head visible whatsoever.... 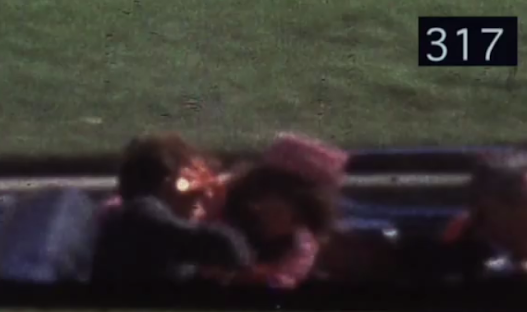 AND IN YET ANOTHER DISCUSSION,
RON ECKER SAID:

What is casting the black shadow on the back of JFK's head here, when he is virtually face down? ....

What's causing the same kind of "blackness" to appear on the back of Clint Hill's head in the very same Z-Film frame? Was Hill's head "blacked out" by the conspirators too?.... 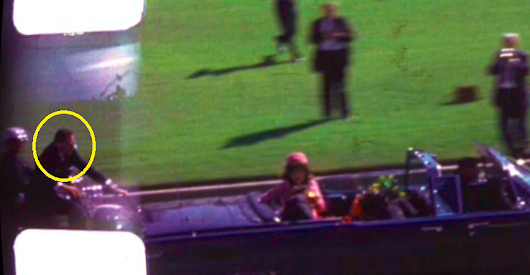 Hill's head is turned far more to the north, and is in shadow. Look at Altgens' shadow.

In this comparison I made below of the head positions of Secret Service agent Clint Hill and JFK, it doesn't look to me as if Hill's head is in a position (relative to the sun) that is all that much different than JFK's head position. Does it? And yet I see the same blackness appearing at the back of both of their heads. And with respect to the Z317 frame shown here of President Kennedy's head, I've heard many conspiracy theorists say that they think JFK's head has most certainly been artificially "blacked out" here....

Looks like one more conspiracy myth debunked by merely examining other parts of the same allegedly "altered" Zapruder home movie.

That the best you can do, Davey? Comparing z317 to a photo further down the road? Not only has the limo rounded a curve, JFK is, as Ron points out, practically lying on his side in this photo.

Mighty weak, Bob. The two pictures in my comparison are only 1.25 seconds apart in real time. Do you really think the degree of blackness (due to shadow) is going to have changed THAT much in just 1.25 seconds?

Plus, as I mentioned before, many CTers think JFK's head has been "blacked out" in ALL post-Z313 frames. (Of course they think that. It would be kind of silly to believe in the "blacked out" theory and yet believe that only SOME Z-frames showing the back of Kennedy's head AFTER the head shot have been blacked out. Right?)

So my comparison of the Z317 and Z340 frames is perfectly appropriate, given what many CTers believe about ALL of the post-Z313 frames depicting JFK's head.

And as can be plainly seen in Z340 (pictured below), the back of Clint Hill's head is pitch black....just exactly like Kennedy's head in Z317. And the only difference that I can see in the two men's position (relating to the sun in the sky) is that Hill's head is turned a little more to his right (north) in Z340 than JFK's head is in Z317.

Try again, Bob. Maybe your next theory will make more sense. Because my Clint Hill/JFK comparison photo destroys the "blacked out" theory, IMO.... 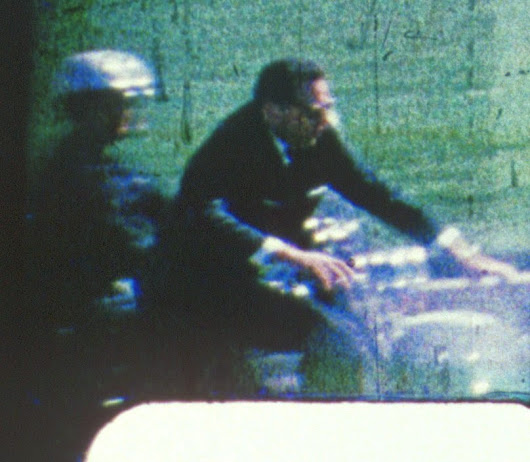 Thanks for the close-up of Clint Hill in Z340, Robin.

And I realize that we're looking at Hill in that Z-frame through the sprocket holes, which makes things a little "hazier" (if that's the right word) when looking at objects in that part of the film strip, but that "looking through the sprocket holes" fact doesn't change the BLACKNESS that is most definitely apparent on the back of Clint Hill's head.

And, to emphasize again --- Since no plotter or conspirator bent on altering or faking the Zapruder Film would possibly have had any need or desire to alter any part of Clint Hill's image in the film, then I think even most conspiracy believers would agree with me that the "blackness" that we see at the back of Clint Hill's head in frame 340 is legitimate, unaltered blackness being seen on his head.

Therefore, since Hill's "blackness" is real and legit in Z340, then why would anybody think that the similar "blackness" at the back of President Kennedy's head in Z317 (which is just 1.25 seconds earlier than Z340 in the very same home movie) is blackness that must have been added to the film by some unknown film-fakers?

It's time to stamp the "blacked out head" theory with this label --- DEBUNKED!

No plotter or conspirator would possibly have any need or desire to alter Hill's image? Suppose the plotter wanted to add blackness to Hill's image (and perhaps elsewhere) to match the blackness added to JFK's image, so that in the future LNers could say, "you see, it's legitimate, unaltered blackness."

Thank you, Ron! Perfect timing! After writing my last post, I was hoping and praying that some CTer would post something that says, in effect, the alleged film-fakers DID, indeed, ALSO alter Clint Hill's head in the Zapruder Film.

As we can see via Ron Ecker's last post, when a really silly idea gets started (like the theory about JFK's head being "blacked out" in the Z-Film), and when the silliness of that idea is brought to the forefront by someone (which I have done in this discussion), then the conspiracy theorists are forced to do a lot of scrambling and damage control in order to still embrace and endorse the silly idea they want to endorse.

So, from now on, whenever Ron Ecker and all other conspiracy theorists talk about this topic, the "New and Revised" theory has got to be this....

Both JFK's and Clint Hill's heads (and maybe a lot more heads too that nobody has even noticed yet) have been artificially blacked out in all post-Z313 frames of the Zapruder Film.

So, as we can see here, a dumb theory can easily snowball out of control.

In this frame, the same "dark shadow" effect can be seen on the back of Nellie's head.... 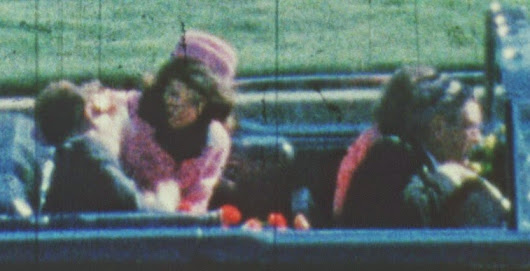 The comments I made in this previous post can now be revised as follows....

"So, from now on, whenever Ron Ecker and all other conspiracy theorists talk about this topic, the "New and Revised" theory has got to be this .... JFK's and Clint Hill's and Nellie Connally's heads (and maybe a lot more heads too that nobody has even noticed yet) have been artificially blacked out in all post-Z313 frames of the Zapruder Film." -- DVP; 5/21/2015

Fabulous. It's now getting harder to keep up with the revised "new" theory that conspiracy theorists will now have to embrace in order to keep their "Blacked Out Head" theory alive and well. Here's the latest revision....

"JFK's and Clint Hill's and Nellie Connally's heads (and maybe a lot more heads too that nobody has even noticed yet) have been artificially blacked out in all post-Z313 frames of the Zapruder Film. Plus, JFK's head has also been artificially blacked out in frame 312, which is one-eighteenth of a second BEFORE he was even hit in the head by any bullet."

And, of course, we can also go back earlier in the Z-Film and find many more frames which show the "blackness" on the back of JFK's head BEFORE he was even shot in the head. Here's just one example below--frame 275. And what about Roy Kellerman too? His head looks pretty black here as well. Does that mean Kellerman's head has been "blacked out" by film-fakers in Z275?....

1.) We know (or at least I do) that there was ONE bullet hole of entry in the back of JFK's head.

2.) We have an autopsy photo (the one below) which appears to show ONE bullet wound of entry in the back of JFK's head.

Now, I wonder what the odds are of having the ONE wound of entry that we know existed in JFK's head NOT being the ONE AND ONLY thing in this picture that resembles a bullet hole?

You can't take a photograph out of context when the correct context has just been given to you in plain english [in this post].

There are actually many dark spots on the BOH photographs which may or may not resemble entry wounds. An alterationist may wonder if those dark spots were added so we can be here in 2017 debating which, if any, spot is the true wound while getting nowhere, but I can accept those dark spots as simply a weird thing that happened in real life.

If you think the red spot looks like an entry wound (even though it's not in the same size, shape, or location as in the autopsy report), then weirder things have happened. You can't believe in anything in this case without accepting a few weird things. 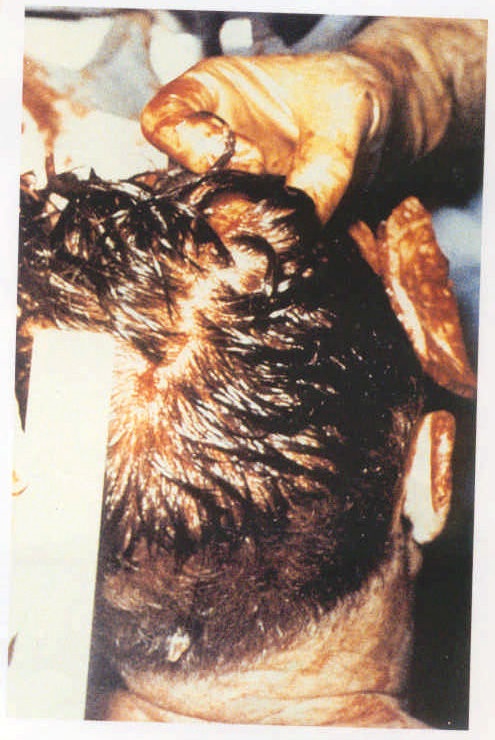 Thanks, Micah. That version of the photo you posted above goes a long way toward debunking the crazy theory in which many conspiracy theorists postulate the notion that a large "black patch" was inserted over JFK's head in the photo to artificially cover up virtually all of the right-rear quadrant of Kennedy's head (to cover up the alleged huge hole that supposedly existed in that part of his head).

But in the version you posted above, we can clearly see most/many of the individual hairs on Kennedy's head in the right-rear area. So that's obviously not a "black patch" there. (Or did some clever fellow using Paint Shop decide to fake the picture by adding in the individual hairs on JFK's cranium? Maybe some CTer can advance that theory now.) :)