For today's laugh we turn to yet another conspiracy theorist--this time a fellow named Ed Souza, a former Los Angeles policeman who has authored a new JFK book, "Undeniable Truths: The Clear And Simple Facts Surrounding The Murder Of President John F. Kennedy", which came out in August 2014.

By merely glancing at a few random pages of Souza's book via Amazon.com's "Look Inside" tool, I found dozens of pieces of misinformation and outright falsehoods -- such as the old conspiracy-flavored myth about how Lee Harvey Oswald was drinking a Coke in the lunchroom during his encounter with policeman Marrion Baker; and the one about how it was "impossible" (Souza's word) for Oswald to have pulled off the shooting with his Carcano rifle; and an outright lie about there being "verified" proof that Oswald was in the second-floor lunchroom at the moment of the assassination; and another whopper of a tale when Souza claims--get this--that Bonnie Ray Williams ate his lunch in the "exact window" from where the shots were fired. (What a brazen lie that is.)

If I had taken the time to read three more pages, my list of "whoppers" would easily have reached triple digits in number. Try it yourself and see how many incorrect myths you can find in Souza's book of pure bunk.

And, of course, Vince Palamara is Johnny-on-the-spot with a 5-Star Amazon review for Souza's book of distortions and lies. (What a surprise, huh?)

Thanks, Patrick, for dismantling several of the distortions of fact that Mr. Souza has put in his book.

My only question now is why on Earth you gave this book full of falsehoods TWO STARS? What could possibly have kept this awful publication from earning the lowest possible ranking?

My first question to you sir is have you read the book? And how much research have you done on this subject?

My 2nd point is even if you do not agree with the premise of the book I can understand that, but to insult me by stating that it was an awful publication clearly points to your lack of intelligence and understanding of not just this case, but what a piece of researched and documented academic writing looks like.

Although Mr. Collins was indeed critical of some of my points in the book, he did not insult my book as you did, which is why your received this response.

You have taken great liberties with the evidence in the JFK case. You have stated certain things to be "impossible" that have been proven to be quite possible via subsequent tests -- Oswald's trip from the sixth-floor Sniper's Nest to the second floor for one; and Oswald's shooting performance with his Carcano rifle for another.

The evidence isn't something to be crafted and molded to your liking. It is what it is. And any rational person examining the sum total of that evidence can only conclude that Lee Oswald was not the innocent Depository employee you make him out to be. Far from it.

In your note to David von Pein [sic], you ask, of David, "how much research have you done on this subject?"

Well you will have the JFK assassination community laughing off their chairs with that one and in doing so clearly demonstrate that your background research on the case must have been rather limited.

That is a bit like meeting Jack Nicklaus and asking him if he ever played golf.........

Dave is probably far too modest to let you know, but I can reliably inform you, he is one of the leading and perhaps the foremost JFK assassination researcher and expert on our little blue planet. (forgive me Dave, I could not resist this).

You have to laugh, is that what you call a faux pass...?

I am sure even you [DVP] would admit that the thousands of points made in my book cannot all be explained away--true?? I would hope you would agree with that point.

Well, Ed, since I've been in the "Oswald Did It Alone" camp for many years now (and I was never really what you'd call a "conspiracy theorist" at any time in my life), then quite obviously I disagree with your position of "Oswald Not Shooting JFK At All".

Ergo, I most certainly DO think that the "thousands of points" that you claim lead to Oswald's innocence and a conspiracy in the JFK murder case CAN and, more importantly, ALREADY HAVE been "explained" (and I'll leave off the word "away" in the phrase "explained away", because in my opinion that is a term best left to describe the many many conspiracy theorists who currently reside in the "Anybody But Oswald" fraternity; because it is those people, the "CTers", who try to "explain away" ALL of the evidence that points unwaveringly to the guilt of Lee Harvey Oswald in the TWO murders he was charged with on 11/22/63).

You're utilizing Carolyn Arnold as a rock-solid witness who couldn't possibly be wrong about the VARIOUS times she gave to the authorities regarding when and where she saw Lee Oswald in the Depository Building on November 22nd. But it's fairly clear to me that even if she did see Oswald somewhere on the first or second floors of the TSBD shortly before the assassination, Oswald could still have (conceivably) been in the sixth-floor Sniper's Nest at precisely 12:30 PM. Carolyn does NOT provide Lee Oswald with an alibi for the exact time of the shooting.

Plus, Carolyn Arnold must be treated the same as all other similar "timeline" witnesses--i.e., you don't place such ESTIMATED times in granite or stone. She wasn't punching a time clock when she (allegedly) saw Lee Oswald on Nov. 22. But to hear many "CTers" tell it, Carolyn Arnold ALONE is the "proof" that Oswald was innocent of shooting the President. But in light of all that OTHER "Lee Oswald Was Here" stuff we find up on the sixth floor, such utilization of a single "timeline" witness is an illogical thing to do.

The conspiracists do the same thing with Helen Markham. Now, granted, I haven't read your whole book, Ed. (I just read a few selected pages via Amazon's free "Look Inside" tool.) But if I were a betting man, I'd wager a large sum that you have utilized Mrs. Markham's and T.F. Bowley's "1:06" and "1:10" times, respectively, for when Officer J.D. Tippit was shot and killed on Tenth Street. (If I am wrong in this assumption, I apologize to you.)

But most CTers love the estimated timelines of both Markham and Bowley. Those conspiracists feel that those times are forever sealed in concrete and therefore their testimony and statements prove beyond all doubt that Oswald did not shoot Officer Tippit.

But such nearly total reliance on "timing" witnesses, as I said before, is just not the way to solve a crime. It's the SUM TOTAL of the evidence that paints the big picture of a crime (as I'm sure you yourself, Ed, being a former Los Angeles police officer, would agree).

And what is the "Sum Total" of the evidence that is on the table in the murders of both JFK and J.D. Tippit? Well, in my opinion, that sum total is clearly spelling out the name of BOTH John Kennedy's killer and J.D. Tippit's murderer -- and it sure as heck ain't "Malcolm Wallace" or "E. Howard Hunt" or "James Files". The totality of evidence is screaming the name Lee H. Oswald.

For Pete sake, Oswald had the Tippit murder weapon ON HIM in the theater when he was arrested just 35 minutes after Tippit was shot with THAT SAME GUN. You can practically call that being caught "red-handed". And there's no way that ALL FOUR of those bullet shells that littered the corner of Tenth Street and Patton Avenue were all "planted" or "faked" in some manner. And all conspiracy theorists who make such unwarranted claims about those shells should know why those claims are dead wrong.

JFK-Archives.blogspot.com / The Murder Of J.D. Tippit

You say you have "thousands of points" in your book that you claim lead toward a conspiracy. That's a pretty big claim, Ed. (Even for a conspiracy theorist.) But I'd be willing to say, without too much fear of being proven incorrect, that approximately 99.5% of your "thousands of points" have been satisfactorily addressed by people such as myself, or Patrick Collins, or John McAdams, or Vincent Bugliosi, or Jean Davison, or Gerald Posner, or Dale Myers, or Mel Ayton, or Dr. John Lattimer, or Larry Sturdivan, or the Warren Commission, or the HSCA, or the National Academy of Sciences, or any number of other individuals and/or organizations and committees that have looked into every crevice of the huge morass known as "The JFK Assassination", with those people producing logical, sound, and rational NON-conspiratorial answers for nearly every anomaly, discrepancy, troubling document, and alleged "conspiracy" witness that exists in the JFK case.

Some things will forever remain a mystery to me, however. Such as the #1 thing that has troubled me for many years now (although a fairly reasonable explanation for even this discrepancy has been put forth by many researchers over the years too) is the fact that so many Parkland witnesses (and even some Bethesda witnesses too) said they saw a huge hole in the BACK of President Kennedy's head---even though, via the authenticated autopsy photos and X-rays, we KNOW there was no large wound in the back (occipital) portion of JFK's cranium. That's a very strange "discrepancy" indeed.

And those photos and X-rays are showing no large blasted-out hole in the back part of JFK's head. They show the large wound to be just where the Zapruder Film shows it to be--in the right/top/frontal portion of the head. And that's just exactly where four of the closest witnesses said the wound was too. Those witnesses being: Abraham Zapruder, Marilyn Sitzman, William Newman, and Gayle Newman. (Three of the four pictured below. Click the photos to enlarge them.)


Thank you, Ed, for your friendly and conciliatory messages aimed at me in this Amazon.com discussion. I totally disagree with your views on the JFK assassination, but you have also been a rare breath of fresh air for me when dealing with conspiracy believers in general. You've been pleasant when speaking to someone who called your JFK book "awful".

I still, however, think that word aptly applies to the book "Undeniable Truths", because based on just the limited number of pages of the book that I read, many of the things that author Ed Souza refers to as "undeniable truths" are, in reality, the same foundation of UNprovable mush and murkiness that conspiracy theorists have been recycling and peddling to the book-buying public for almost fifty years now.

But, unfortunately, I have discovered over the years that it doesn't seem to matter how many times the various conspiracy myths are debunked and proven to be just that--myths--there will always be somebody, somewhere, who will be willing to resurrect those long-discredited myths and prop them up again in a book, or on an Internet website, as if those myths were the gospel truth and had never once been properly dealt with by anyone on the "lone assassin" side of the fence.

An excellent example of what I was just talking about is illustrated at my webpage HERE. 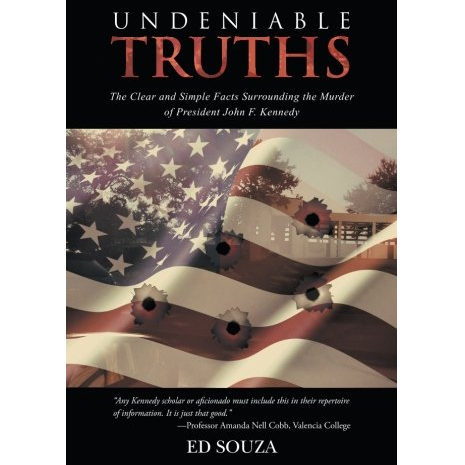 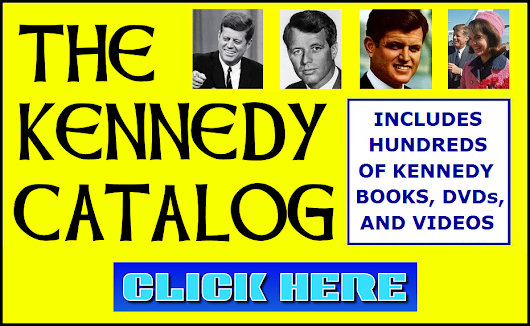