This topic is merely an "FYI" kind of thing that I found interesting (and a bit amusing)....

While watching Part 1 of PBS-TV's 1993 documentary "Who Was Lee Harvey Oswald?", I noticed something near the end of that first hour that I had never noticed before (even though I've seen the program many times in the past) -- it's a simulated (color) version of the Klein's Sporting Goods order form that Oswald had used to order the Mannlicher-Carcano rifle. The simulation is pictured below: 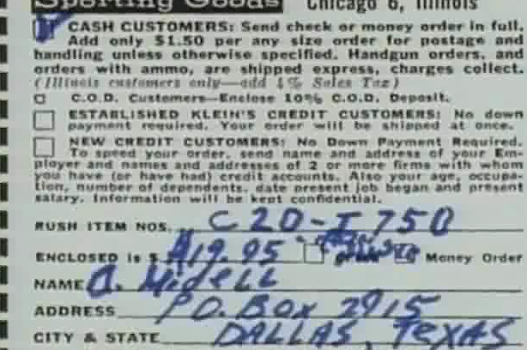 Somebody has created a fake version of Oswald's order form which was utilized by the producers of the above-linked PBS "Frontline" program (Part 1; at 56:11), with all of the things written on the form that the real Oswald had written in on the form he sent to Klein's in March of 1963. This forgery was apparently created in order to simulate what the entire Klein's ad would have looked like PRIOR to the ad ever being cut out of the magazine where the advertisement appeared.

I don't know why the PBS producers couldn't have merely shown the full-page Klein's ad being accompanied by the REAL order form that Oswald filled out in '63 (which is Warren Commission Exhibit No. 773). But they did not do that, opting instead to use a phony version of the order form. (I guess they desperately must have wanted to show the blue color of the ink.)

Anyway, I just thought I'd share this obvious "forgery", which might make some conspiracy theorists smile with delight (in a "See how easy it is to fake Oswald's handwriting" kind of way), because at first glance it does, indeed, look like a pretty good representation of Lee Harvey Oswald's writing (complete with Oswald's common habit of capitalizing some printed letters, while not capitalizing other letters).

But when the real and fake documents are compared side by side, the differences become very obvious (see the montage I created below; the real Oswald order form is, of course, the black-and-white one on the left).

It makes me wonder what a "questioned documents expert" would say if he were to examine the forgery on the right below? Would he be able to tell right away it was a fake? My guess is: Yes, he would.

But I find it interesting that the PBS people who made the Oswald documentary in 1993 would go to the trouble of creating a fake (or "simulated") version of Lee Oswald's rifle order form when a relatively clear copy of the real thing is right there to use on Page 635 of Volume 17 of the Warren Commission volumes.

The original order form would not have been clear to viewers--it was also not of "broadcast quality", if you will. .... PBS stayed true to the original, albeit not perfectly.

Yes, I thought that same thing too.

However, the real Oswald mail-order form WAS considered to be of "broadcast quality" by CBS-TV in 1967, for its "CBS News Inquiry: The Warren Report" special (Part 1; at 7:44).

And the real coupon for the rifle has likely been shown in other JFK-related programs over the years too. Of course, when 1967-era TV shows are compared with material being broadcast in 1993, there was a big difference in the "TV resolution" that viewers could obtain on their television sets. So the lack of "broadcast quality" for the original rifle order coupon could, indeed, have been on the minds of the PBS producers in 1993.