I find it rather humorous to note that Bob Harris is of the opinion that the Moorman photograph shows the back of JFK's head completely "intact", which is exactly the opposite of what many different CTers believe.

A lot of conspiracy kooks love to paint in their interpretation of a huge "blow-out" hole at the rear of JFK's head within the Moorman photo (which, of course, is a hole that isn't there at all...but it never stops a good conspiracist from drawing a great-big hole into the picture).

So, we've got one CTer (Bob Harris) telling us to believe him regarding the Moorman picture (i.e., that there's no hole at all visible at the back of Kennedy's head in Moorman's pic)....but many other CTers want the world to believe THEM when they claim that the Moorman picture is depicting a large chunk of JFK's head missing at the back of the head.

BTW, if anybody gives a care, it's my own opinion (and has been for some time) that Mary Moorman's B&W Polaroid photograph (below) was taken just a split-second or so BEFORE President Kennedy was hit in the head: 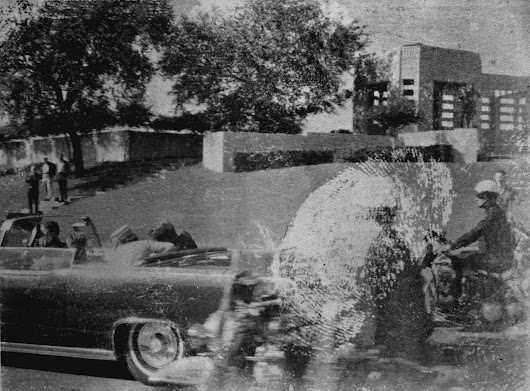 If the head shot had ALREADY occurred before Moorman snapped that shutter on her camera, I have a hard time believing we'd see no effects of that head shot whatsoever within Moorman's picture. And there's no "spray" visible, no visible blood or brain particles (which, of course, are very, very visible from across the street via Mr. Zapruder's film).

However, I'll also admit that the Moorman photo is of very poor quality to begin with, so any details are hard to discern within the image. Which, of course, is one of the main reasons why the "Badge Man" theory is so ridiculous. Researchers are relying on a super-duper blow-up of an already crappy Polaroid to "find" assassins in the far background of the degraded imagery. Impossible, IMO.

Here are some random thoughts regarding Mary Moorman's belief that the FIRST shot (of 3 or 4 total that she said she heard) hit JFK in the head:

If the first shot had been the head shot, then (logically) it would not make very much sense for there to have been any more shots AFTER the fatal blow to the President's head--let alone MULTIPLE additional shots being fired into the car.

And here's another point to be made on this (probably even a better logical point than the one I just made above) -- As we can see via the Zapruder Film, right after JFK was struck in the head, his head is moving around violently (which, it would seem to me, would have presented a difficult situation for any gunman at that exact point in time, because his head would have been very difficult to keep in the gunman's sights because of its violent movement backward after Z313).

And we can also see in the Z-Film that JFK crumples OUT OF SIGHT of ANY gunman in Dealey Plaza within just seconds of the Z313 head shot.

So my next logical question for Ms. Moorman (or anyone else who contends that gunmen were still popping away at President Kennedy by firing MULTIPLE SHOTS after Z313) -- What were those gunmen shooting at at that point in time? Jackie? Roy Kellerman? James Tague? Because if it was more than just a second or two after Z313, and shots were still being fired in Dealey Plaza, then those gunmen were certainly not going to have a very clear shot at John F. Kennedy. That's for sure.

Anybody else ever wonder why Mary Moorman waited until after President Kennedy's limousine had gone past her on Elm Street to take her now-famous assassination photo?

Since Mary's camera was a Polaroid, she could only take one photo every ten seconds, but for some reason she waited until the car completely passed her position to snap the shutter, so that she got a picture of the back of JFK's and Jackie's heads.

As things turned out, of course, Moorman's picture is great for conspiracy theorists, who have turned her grainy black-and-white image into a springboard for their "second gunman" conspiracy theories. CTers have combed the background of the picture and have "found" numerous mysterious plotters and gun-toting assassins who aren't really there at all.

But from Mary Moorman's photographic point-of-view on Elm Street in Dallas' Dealey Plaza on November 22, 1963, I haven't been able to logically figure out just why in the world Mary preferred a picture of the back of the head of the President of the United States instead of a photo that would have looked something like this one below (perspective-wise and angle-wise): 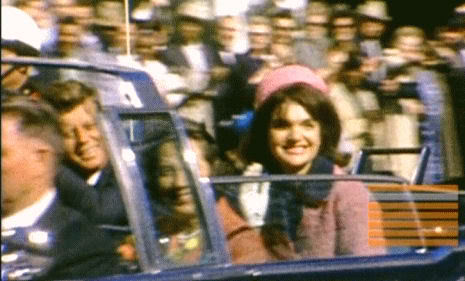 A few seconds earlier the limo would be too far away [from Mary Moorman].

Therefore, it was much better to wait until the car passed her by, so that all that she is going to get is a nice picture of the back of Kennedy's head???

She TRIED to take her photo when the limo was the closest to her, but it takes a few milliseconds to press the button.

I was merely pointing out and attempting to emphasize this "simple fact" in my thread-starting post:

1.) She could have chosen to take the picture while the President's car was still to her right (east), which would mean very likely capturing an image of JFK's and Jackie's faces (plus the Connallys too).

2.) She could wait and snap the shutter after the car has gone past her (to her left/west), which means she cannot possibly capture a "face" shot of anyone in the car (unless JFK or Jackie would be nice enough to turn sharply to their left and smile at her after the car has already gone by her).

Mary chose option #2. And, in my opinion, that's just kind of strange.

Those are the "simple facts" I was trying to stress, Tony. But, as always, Marsh has his "argue" button in the permanent "On" position, even for an unimportant thread like this one.

I only started the topic because it's something I've always wondered about when thinking about Mary Moorman's photo.

Here's another way to look at it:

If JFK had not been shot and killed right in front of Mary's camera lens, then her Polaroid picture would probably have been regarded as a pretty lousy photo (which it is, perspective-wise, when the assassination is removed from the equation).

If JFK had not been shot in Dealey Plaza, I wonder if Mary would have said this to her friends after taking the picture she took on November 22:

Look at this great picture I took on Friday of the back of President Kennedy's head! Isn't this a great angle I got of the President? And just look at that great view of Jackie too! That pillbox hat is terrific, isn't it? And the back of her head is simply stunning! 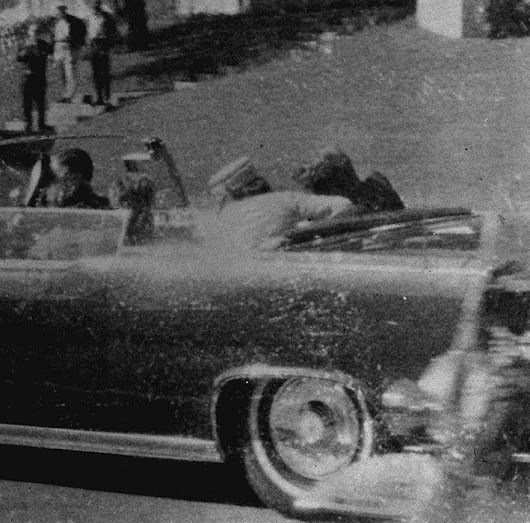 How many hours did it take the press to publish the Moorman photo? Do you think the CIA Ultra Top Secret photo lab in New York could have altered it before the press published it? Even using the fastest spy jet then to transport it back and forth?

That's got nothing to do with this thread at all. Why did you even bring up photo alteration here?

She [Moorman] chose to take the picture when the President was right in front of her.

"I took the camera and aimed it--focused it--and stood there and looked through it for quite a few seconds because I wanted to be sure they were looking at me." -- Mary Moorman; 1964

This thread that I started is totally meaningless. I admit that. It's just something that had been going through my head for some time, and I wanted to put my thoughts about it down on "e-paper" (for my archives--naturally). So I did. Nothing more elaborate than that.

I just think it's kind of odd that Mary Moorman chose to snap her now-famous photo of JFK at the time she did choose to take it, because from all of the available comments made by Miss Moorman herself that I have been able to obtain, it would certainly seem (even with the mandatory 10-second interval that her Polaroid camera required between pictures) that Mary could certainly have taken her photo of JFK's car prior to the time when she did take it.

[The Moorman] photo proves there was no huge hole in [the] back of [JFK's] head.

The exact instant the Moorman photo was taken is critical to that argument.

We know it was taken ABOUT the time of the head shot, but we don't know precisely when it was taken.

JFK began rocking backward one Z-frame after his head exploded. Since we don't see that rearward lurch in the photo, the latest that photo was taken would be 1/18 of a second after the head shot struck. Most likely it was taken a split second before the head shot, so there is no reason to think a blowout in the BOH would show in that photo.

The blowout extended all the way along the upper right side of the head, from the occipital to the temporal regions. Had Moorman taken her photo a split second later, we would see JFK rocking back and we may or may not see the blowout that extended to the BOH.

I agree with this observation made by John Corbett:

"...Most likely it [the Moorman photo] was taken a split second before the head shot..."

I've always thought that Mary Moorman's picture was probably snapped just an instant before the fatal shot struck JFK's head. Because it's always seemed logical to me that if that picture had been taken an instant after the head shot, then I would think we would see at least a little bit of proof of that fact in the photograph, such as a flap of scalp on the President's head that is out of place....or perhaps at least a hint of the blood spray which we know was surrounding Kennedy's head between Z-frames 313 and 314.

But in addition to the fact that President Kennedy's head looks undamaged and undisturbed in any manner in the famous Moorman Polaroid, there's also not a trace of "spray" visible in the air around JFK's head in the picture. (Although, granted, the Zapruder Film does, indeed, verify that the blood spray had dissipated completely by about Z317. So if Moorman's picture was taken, as some believe, a fraction of a second after Zapruder frame 315, then no blood spray would likely be visible.)

It's just too bad that Mary Moorman had such a crappy (Polaroid) type of camera, which was not capable of capturing a very high quality image through its inexpensive lens.

To take a Polaroid photo, you have to hold the camera with both hands. In observing the Zapruder film frame by frame, it does appear that Moorman starts to release her left hand from the camera at 311. At 313, it appears that her left hand was completely off the camera, meaning she would have had to take the photo before then.

That's an interesting observation concerning this Moorman topic that I don't think I've heard discussed before. Thanks, Allan.

I don't see it. What is his source material?

I didn't say I necessarily agreed with Allan Johnson's above comments, Tony. I merely said he made a unique and interesting observation.

I, myself, can't tell whether Miss Moorman's left hand is still touching her camera in Z313 and Z314 or not.