I think it is silly at this late date to theorize over which bullets went where, that were fired by Oswald, because Oswald has never been proven to have been firing any shots in Dealey Plaza on 11/22/63. In fact, it is shown beyond reasonable doubt that the Carcano claimed to be Oswald's weapon was never fired either.

I have broken down that argument previously in showing that the Parkland Bullet is certainly not CE399, and that the ONLY place CE399 could originate from is the FBI itself. CE399 has all the hallmarks of a bullet fired into cotton wadding. It certainly did not strike any bone.

So this Carcano bullet [the "Fackler Bullet"] (which broke a human wrist bone) is a fake too, eh?.... 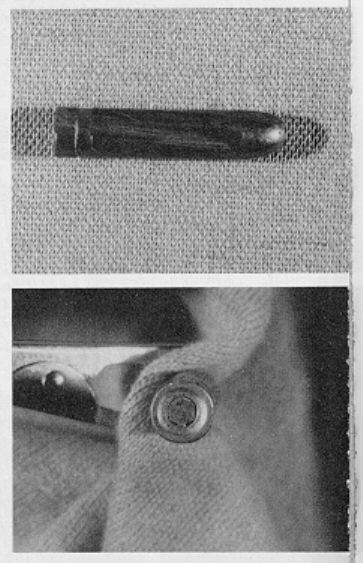 No, it certainly appears to be a Carcano bullet. BUT it wasn't fired in Dealey Plaza on 11/22/63 either. Was it, Mr Von Pein?

So what? The point is --- the CTers are dead wrong when they constantly claim that a Carcano bullet couldn't possibly have come out in decent shape after striking a wrist bone of a human being.

The key, of course, is the SPEED of the bullet at the moment it hit the hard bone. CTers will always ignore the "speed" issue. Cyril Wecht constantly ignores the key issues surrounding the condition of CE399. As do all other CTers.

Cyril Wecht is a forensic pathologist. And YOU, Von Pein, are qualified in exactly WHAT?

You certainly aren't qualified in debate. You certainly do not make the grade in critical reasoning. What is it that you are good at, Von Pein? Can you bake a cherry pie?

Good boy, Willy. Just keep pretending that Dr. Wecht has treated the CE399 topic fairly and properly, even though we all know he has done no such thing. But as long as Wecht tries to discredit the perfectly true Single-Bullet Theory, you're happy and content. Good boy.

I read the details of the Fackler experiments, Von Pein. [Click Here. The document is also embedded below.] That bullet was NOT fired with a full charge of powder that a standard Carcano uses.

He reduced the charges in increments to slow the bullet down to the speed it would have been traveling had it gone through Kennedy's neck, then through Connally's armpit, shattering a rib, and then exiting Connally's chest and striking the wrist.

In other words, Von Pein, that bullet didn't do a fraction of the work that CE399 is claimed to have accomplished.

Of course the Fackler bullet was fired with a reduced powder charge. Hence, it was only going 1100 feet per second when it struck the cadaver's wrist. THAT'S THE WHOLE POINT OF THE EXPERIMENT! It was meant to slow down the bullet to simulate the speed of the bullet when it struck Connally's wrist after it had departed Kennedy's neck AND Connally's chest.

And, of course, an even better experiment was done in Australia in 2004, which all desperate conspiracy hobbyists attempt to trash with zeal. But they fail at trashing it, as usual.

JFK-Archives.blogspot.com/JFK: Beyond The Magic Bullet

The whole point of the experiment fails because Fackler's bullet did NOT do all the work attributed to CE399. It only hit one bone, it did not pass through tough dermis, clothing, shatter a rib, before striking the cadaver's wrist.

If you do not grasp how this disqualifies the experiment, as it does NOT match the conditions CE399 is proposed to have been through, then you are again showing your lack of critical reasoning skills.

Then you can't possibly promote Wecht's persistent hollering about the Warren Commission's experiments either, because we all know that those WC test bullets that Dr. Wecht loves to promote as PROOF that the SBT is baloney also "did NOT do all the work attributed to CE399". Not even close. They didn't even use a reduced powder charge for the "wrist" bullet test. So, why would Wecht (or anyone) claim that that test bullet could be used to discredit CE399 and the SBT? That test bullet does no such thing, and Wecht has to know why. Ergo, my whole point is now revisited regarding Dr. Wecht....

"Good boy, Willy. Just keep pretending that Dr. Wecht has treated the CE399 topic fairly and properly, even though we all know he has done no such thing."
-- DVP; 6/14/16

I love it when a CTer falls unwittingly into a pot and the neighboring kettle.

Dr. Fackler's experiment wasn't designed to perform everything that CE399 did. You know that, of course. But you won't be happy until two human beings are sacrificed to re-create the SBT. (And I'm sure even that wouldn't satisfy CTers either. The person playing Connally would be disqualified because one of his toenails was a millimeter longer than the real John Connally's.)

"Dr. Fackler's experiment wasn't designed to perform everything that
CE399 did." -- Von Pein

That is right, and that is why it didn't prove what it set out to prove.

Dead wrong. Martin Fackler's (limited) experiment did prove what it set out to prove --- i.e., it proved that a Carcano bullet, when fired into a human wrist at a reduced velocity, CAN and WILL emerge in very good condition, similar to CE399. That's obviously what Dr. Fackler was attempting to demonstrate when he did that bullet experiment for the ABA mock trial of Oswald in San Francisco in 1992.

The clearest indication is that the rifle [and] the bullets were stage props, and the "sniper's nest" was a staged scene.

The evidence goes beyond merely an argument of a broken chain of custody from Parkland to FBI DC headquarters, it is evidence of intent to deceive, and criminal malfeasance; evidence of a criminal conspiracy.

And the several witnesses (Brennan, Euins, Couch, and Jackson) who saw A GUN in that window were all liars, is that it?

Someone had to have set up the scene. But do I think Brennan was a liar. Arnold Rowland and Amos Euins gave descriptions that were more precise than Brennan's, but which did not match Oswald's appearance. Bob Jackson and Malcolm Couch saw a rifle barrel being withdrawn from the window.

You've got some runny diarrhea for proof there, Von Pein.

But the goofy plotters never thought to plant a really good "IT WAS OSWALD" witness in Dealey Plaza. They only cared about people saying they saw the RIFLE, not the KILLER himself. (Hilarious.)

The CT excuses couldn't be any more inane if the CTers tried.

Yet the 7 witnesses (we know about) claiming they saw a rifle protruding from that window, none of them said they noticed the rather obvious telescopic sight on the M-C found there.

Got a link explaining that, Davy?

Brilliant, Dex. Four witnesses (are they ALL plants?) say they see a quick glance of a rifle, but we're supposed to dismiss them all, per CTers, because they failed to note the scope on the weapon.

Is it any wonder CTers are chasing their tails (and tales)...and shadows?