Maybe you didn't even read Videotoaster. Maybe you weren't even aware of it. Or maybe you were embarrassed by it. [Dale] Myers was featured to show off Lightwave software. The editors accidentally selected a frame from his video which shows Connally too far to his right. So far that any bullet hitting JFK's back and exiting his throat could not possibly hit Connally's right armpit and would have to hit the middle of his back.

I scanned in the cover of the Videotoaster magazine which shows one frame from the Dale Myers video of the limousine driving through Dealey Plaza. Then I placed a white dot on where Connally's entrance wound was on his coat. .... Myers accidentally reveals that there was plenty of room for a bullet to pass over JFK's right shoulder and hit Connally's right armpit, just as Specter accidentally did with CE 903. .... Connally is too far to the right.

This "Video Toaster" view of the victims isn't the same as Lee Harvey Oswald's Sniper's-Nest point-of-view at all: 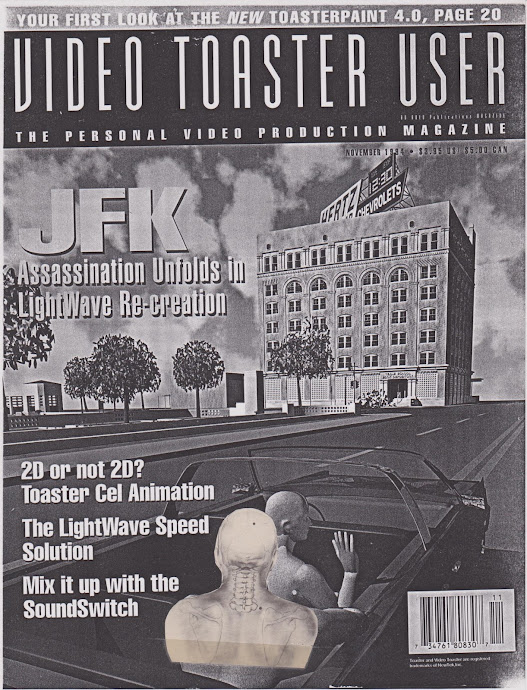 The car isn't even on Elm Street yet in the above photo. What makes you think Dale Myers has got it all wrong when the above picture doesn't even purport the "Sniper's View" of the victims from the TSBD? Oswald didn't shoot from Main & Houston; he shot from Elm & Houston, six floors up.

Here's what Oswald was seeing at the time of the SBT: 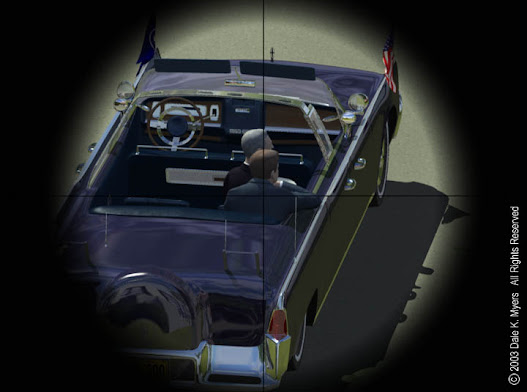 If JFK's killer had been located at Main & Houston, you might have a point, Tony. But Kennedy wasn't shot from that location. So your constant "Myers Is A Liar" whining is totally meaningless and moot (as usual). Just as I knew it would be before I ever clicked on your Video Toaster photo.

My point is that it just illustrates that what I said is true. Connally was too far to the right to be hit by a SBT bullet and there was plenty of room for a bullet to hit him directly without having to go through JFK first. Certain deadheads here are not able to visualize that, so the Myers cartoon SHOWS how it is possible.

If JFK had been shot in the upper back near the Main & Houston intersection, and also from a position just exactly where the "virtual camera" was located in the Video Toaster animated photo--then, yes, you might have a point.

But, to reiterate this vital fact, the Video Toaster image proves none of what you claim it proves--because the Toaster picture shows the car on HOUSTON STREET, not on ELM STREET.

In addition, the Video Toaster image certainly is not showing nearly the correct angle to match the angle that Oswald was shooting from, which was 60 feet up in the Depository. And there's also the 3-degree slope of Elm Street that would have to be factored in, too. There's no 3-degree slant on Houston Street that I am aware of.

So why, Tony, are you even pretending that the Video Toaster image is identical to the view and shooting angles that Oswald was faced with as he fired his SBT bullet into the President's upper back from the sixth floor of the Book Depository? They are two completely different angles entirely.

You've proved nothing, because you're comparing plums with apricots (or, in this instance, Houston Street angles with Elm Street angles).

I never pretended that the cover frame is identical to the view from the sniper's nest.

Yes, in essence, that's pretty much exactly what you claimed. Because if you admit the angles are totally different, then what the hell's your point in the first place?

In reality, you have no point--because the angles are obviously different due to the fact JFK wasn't shot at a low angle from the corner of Main & Houston. (Duh.)

They are two completely different angles. That is the point.

You're making my argument for me. Thanks.

Myers screwed up and accidentally showed how Connally was too far to the right for a SBT to work.

But only if Kennedy and Connally had been shot at the corner of Houston and Main Streets by a gunman who was situated at a much lower location than was Oswald in the Depository. That's the point you keep missing or deliberately sidestepping with more Tony Talk©.