In September of 2009, conspiracy theorist Robert Harris started this forum thread, wherein he was positive that Texas Highway Patrol Officer Bobby M. Nolan had not placed his initials on Commission Exhibit No. 842 (the "foreign body" envelope containing bullet fragments removed from Governor Connally's wrist), which is an envelope that Nolan received from Parkland Hospital nurse Audrey Bell.

Harris said the following in this post on September 8, 2009:

"The [Connally] fragments were labelled as CE842. .... Where do you see Nolan's initials [on CE842]? .... There is NO envelope among all the records that are available to the public which contain Nolan's initials. That envelope was destroyed." -- Robert Harris; 9/8/09

But when eagle-eyed "ShutterBun" [in this post] discovered the very next day that Bobby Nolan's initials were, in fact, on CE842 (but the envelope needed to be turned upside-down to read the initials properly), Bob Harris was forced to eat a substantial bit of crow concerning this issue and was forced to acknowledge that Nolan's initials are, indeed, visible on CE842.

Well, Robert Harris wasn't bound to accept total defeat regarding this CE842 issue. Since he could no longer claim that Nolan's initials were not on the envelope in question, Harris decided to look more closely at some of the other initials that appear on that piece of evidence. And what did Mr. Harris find? He found that Audrey Bell's initials had very likely been planted or forged onto CE842 (and somebody else's initials had been crudely erased right underneath Bell's initials).

Harris makes this allegation regarding the alleged "forged" initials of Audrey Bell in this Internet forum thread he started at John Simkin's Education Forum on April 19, 2010 (and he has probably made the very same allegation at the alt.conspiracy.jfk and alt.assassination.jfk forums/newsgroups too):

"The FBI...altered the evidence envelope that held the bullet and forged the name of nurse Audrey Bell, to make it appear that the envelope held the fragments from Connally's wrist, instead of the bullet from his leg." -- Robert Harris; 4/19/10

Well, here on May 16, 2010, eight months after the confirmation of Bobby Nolan's initials on the envelope seen in CE842, I decided to take another look at Bob Harris' video called "The Scam Of CE399" (which was recently made available on Jim DiEugenio's CTKA.net website as well).

And then I decided to perform the same simple piece of investigation that ShutterBun had performed in September 2009 -- I simply turned Commission Exhibit No. 842 upside-down and looked at the initials that Harris is claiming are the "forged" initials of nurse Audrey Bell.

And what did I find?

I found that the initials that Harris believes are Bell's are, in fact, the initials of Dallas Police Captain J. Will Fritz ("JWF"). Let's have a look: 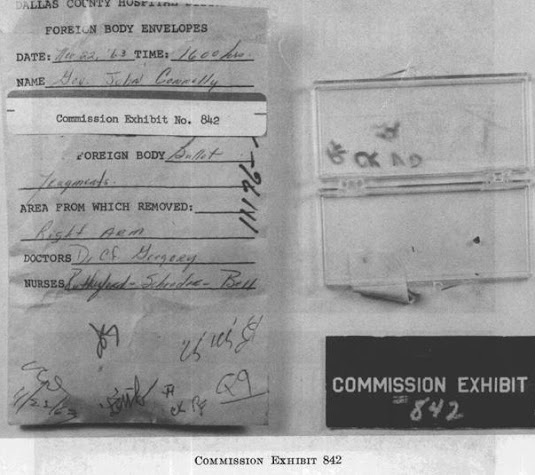 And to confirm that the "JWF" initials that we see in CE842 are consistent with the known handwriting of Captain John Will Fritz of the Dallas Police Department, I looked up several different documents that contained Fritz' signature, and I confirmed that the "JWF" seen in CE842 does, indeed, match the handwriting of Fritz (see the three examples HERE, HERE, and HERE, and pay particular attention to the way Captain Fritz writes the letter "W", with very sharp points at the bottom of each "W").

And, btw, in Robert Harris' very own telephone interview with Bobby Nolan, Nolan told Harris that after he received the envelope from Nurse Bell at Parkland, he then took the envelope to the Dallas Police Department and turned it over to "someone...in Will Fritz' office":

"When I took the bullet down to the police department, I gave it to someone there. .... IT WAS IN WILL FRITZ' OFFICE." -- Bobby M. Nolan; Via telephone conversation between Nolan and Robert Harris; circa 2009 (Emphasis added by DVP)

Therefore, it seems perfectly reasonable to find Fritz' initials ("JWF") on that envelope in CE842.

I guess Mr. Harris didn't learn his lesson last September. That lesson being this one:

Before accusing people of planting or forging evidence in the JFK murder case, be sure to look at all of the evidence UPSIDE-DOWN.

And that really should be an easy rule for conspiracy theorists to follow too, because all of their theories about President Kennedy's assassination are always upside-down and topsy-turvy anyway.

So, I guess Bob Harris will need to revise his conspiracy theory concerning CE842 yet again. And this time I would assume that Harris will claim that Captain Fritz' "JWF" initials have been "forged" onto the envelope.