The only thing Martin Hinrichs did is to slide JFK to the right in that photo [below]. That's all. Nothing else. Big deal.

So, what is that supposed to prove? Especially since we all know that JFK was sitting three inches higher than Connally.

Connally is also much more "scrunched up" in that awful jump seat that he had to sit on during the Dallas motorcade, giving the false impression that JBC was smaller than he really was.

Just take a look at this photograph of the SS-100-X limousine and imagine the large frame of John Connally sitting on this jump seat. Heck, he was practically sitting on the car's floorboard: 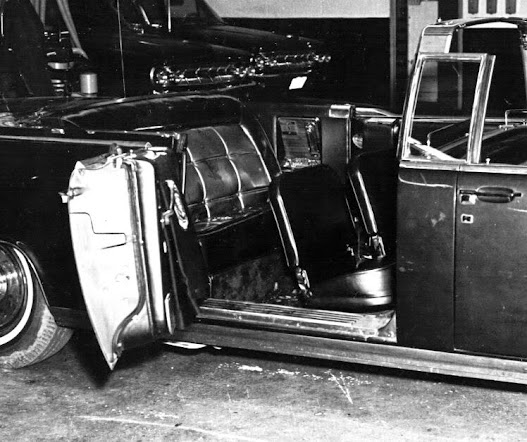 Yeah, I don't see why we need a 3D animation at all really. This is easy stuff. Apparently no professional 3D expert is willing to take the job on of showing us exactly where that shot came from. Too bad, as I am sure we would all like to know how it ends up.

Seeing as how the only shots came from Oswald's sixth-floor window in the Book Depository (and the wounds on both victims--not to mention the THREE spent bullet shell casings found right underneath Oswald's window--fully bear this out) -- the only place any accurately rendered 3D animation could conclude the shots came from is the sixth floor of the TSBD.

More CTers ought to read how detailed and accurate Dale Myers' animation truly is. For Pete sake, he used the actual blueprints of the TSBD, Dealey Plaza, and the limousine! How much more accurate could anyone hope to get?

You have to appreciate the significance of changes to both men [in Dale Myers' computer animation]. Particularly the downsizing of JBC (or upsizing of JFK).

The difference in the sizes of the two victims (JFK & JBC), in real life, wasn't all that much. Kennedy was 6-feet, 0.5-inch tall (72.5 inches). Connally was apparently 6-feet-2. (I'm relying on unconfirmed CT reports on his height, which probably isn't a good idea for ANYTHING, but the 6'2" figure sounds about right.)

Plus: Dale Myers' animation was originally done without any of the facial features or other physical characteristics of the victims being included in his model. It was a "wireframe" version of the model that Myers started with in 1995. He later added the clothing and all of the physical/facial features to his animation, just to make it look nicer. But those physical features, for the most part, are meaningless and not required at all.

In addition, as Myers himself has told his critics in the past, you could literally REMOVE the limousine from the animation too. It wouldn't make a bit of difference if the two victims were faceless blobs of animated clay and it wouldn't matter a bit if the Lincoln limousine was eliminated entirely. The computer still knew the most important details (based on the fact the animation was "key framed" to the Zapruder Film itself) -- the trajectory of the bullets and the two "blobs" (victims) in the path of those two bullets.

Did you say Z-Axis did the proofing on this?

I didn't say it. Dale Myers did. I was quoting Myers.

Are you saying Z-Axis is a crappy outfit, Colin?

If not, then what's your point of bringing up Z-Axis at all?

How do we explain a "gross inaccuracy" in the car.....using scale models and all?

There is no "gross inaccuracy", Colin. That's merely an allegation coming from conspiracy theorists (like you) who think you can achieve TO-THE-INCH, 3D accuracy when looking at flat 2D photos and screen captures.

You surely aren't implying that YOU know more about computer animation and photogrammetry than Dale K. Myers....are you Colin?