I was on the road this week.....Monday [April 13, 2015] to Chicago and back.....yesterday [4/16/15] to Albuquerque and back. Anyway, 6 total flights. The Albuquerque flight had 2 layovers in Dallas. I had BRD ["Beyond Reasonable Doubt"] with me....and I am ashamed to say I have not finished it yet----but I took it with me with the express purpose to just talk--if anyone was inclined. It generally takes me awhile to read a book. I tend to check things out which leads to more research, which slows down my reading.

Out of 6 different people that I sat beside, 3 saw me reading the book and made some sort of comment....which then sets me off. Had some great discussions. As you know, the average person knows just enough that they can be swayed easily if someone conducting the discussion makes sense. Which hopefully I did. My impression is most reasonable people just need a fair explanation with answers to their questions. I explained much and different things to all 3. I told them to go get BRD for a great sort of overview of the actual facts---and presented in a way that makes sense and they would understand. So, hopefully they will.

I guess the bottom line is.....out of 3 total strangers....not 1 of them was any sort of conspiracy theorist---just the average person looking for a fair explanation of what they really don't understand. I love to present them with my "cop" perspective, based on knowledge of criminals, physical evidence, forensics, autopsies, and general criminal investigations---all of which I have experience first hand.

Well, I don't want to get too verbose here. I just hope I can contribute in some small way. And I hope all 3 get their copy of BRD!

Thanks for sharing your "in flight" story. I very much appreciate the support for the "lone assassin" position and for the book.

There is only one thing I wanted to ask you about---this bone fragment that "Walthers" supposedly found? This I have never heard before.

Other than that, I think it [the "BRD" book] is superb so far---for many reasons.

"Walthers was in fact retrieving a piece of the President’s skull from the scene of the crime." ["Beyond Reasonable Doubt", page 108]

....is something that apparently Walthers himself said at some point in time after the assassination. Those words (above) that appear in "BRD" were written by Mel Ayton and not by me, and there's no source listed for that specific claim concerning Walthers. So I'm not sure exactly where Mel got that info.

I have just now looked for a source document that would verify Walthers saying he found a bone fragment in Dealey Plaza, but I could not locate anything. (The conspiracy theorists, as you probably know, have claimed for years that Walthers can be seen in a photo picking up a BULLET in Dealey Plaza just ten minutes after the assassination. I, however, can find no documents or testimony of Walthers saying any such thing.)

But I will add the following person's quote as a "source" for the "bone fragment" assertion (and as far as I am personally concerned, this person is THE very best source you could possibly find with respect to anything relating to President Kennedy's assassination) -- Jean Davison. Jean said this at Jefferson Morley's "JFK Facts" site in February of last year:

"Dallas police detective Buddy Walthers said that he picked up a bone fragment at a location not far from the one Harper marked, i.e., forward of the limo at Z313." -- Jean Davison; February 10, 2014

Jean didn't cite a specific source for the above quote about Walthers [but I later clicked on the link Jean provided in her "JFK Facts" post and did find the source; see my follow-up posts below], but I've learned in the last several years that Jean Davison does not make claims that she cannot back up with some type of source material. If she says something, you can take it to the bank. (At least I feel that way about her.)

After doing a little more searching on the Internet, I came up with this source for Jean's "bone fragment" quote relating to Buddy Walthers.....

"Somewhere I have a Baton Rouge newspaper article in which Walthers is quoted as saying that it wasn't a bullet he picked up (as Garrison had charged) but a piece of bone. You may've seen the photos in Gary Shaw's "Cover-Up" showing what appears to be Walthers' hand picking up an irregular-shaped object -- one of a series of photos [seen below] taken on the south side of the street. Looks more like a bone fragment than a bullet to me. If that's what it was, I think he may've failed to mention it in his testimony out of embarrassment, for how would he explain whatever he did with a piece of the President's skull?" -- Jean Davison; July 29, 2001 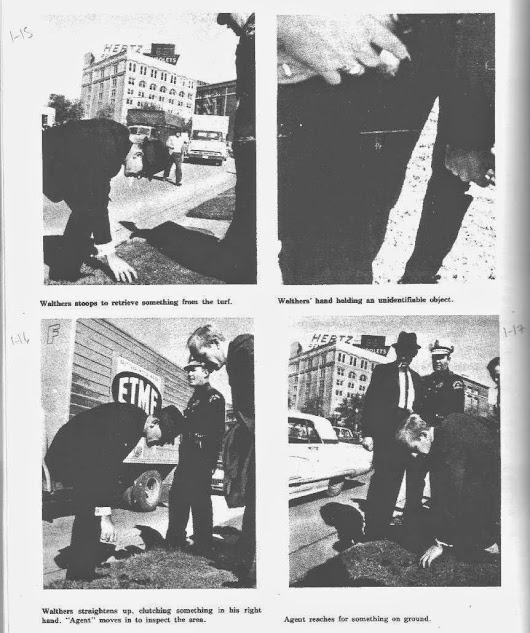 And after still more Internet searches, I found the paydirt post written by Jean in 1997 concerning this topic about Buddy Walthers.....

If I remember correctly, I actually read Walthers' statement in a New Orleans newspaper that quoted the Baton Rouge article, but I don't have access to either of those newspaper archives now.

Thanks, Jean and John.

To expand on John's comment about Walthers' remarks that appeared in the Waco newspaper on 12/14/67, here are additional excerpts from that article:

"DALLAS (UPI) —— A deputy sheriff who appears in a picture which New Orleans Dist. Atty. Jim Garrison claims shows a federal agent picking up a bullet near the Kennedy assassination site said Wednesday [12/13/67] he doubted the object was anything of the kind.

"It was nothing significant," said Dallas deputy Buddy Walthers. "If it had been a bullet, it would have been significant."

Walthers appears, standing alongside a uniformed Dallas policeman and watching another man in civilian clothes picking something up from the grass near the assassination site.

Garrison produced the picture on a television program in Dallas last week, along with another showing the unidentified man holding something in his hand and walking away. The New Orleans district attorney said the man was picking up a 45-caliber bullet.

"This city officer and I were standing by watching this man pick up something," Walthers said. "It was what appeared to be blood. You've seen blood that has hit grass. If it was anything it was a piece of skull. It was nothing significant. If it had been a bullet, it would have been significant."

Walthers said the photograph was taken about 10 minutes after the assassination. At the time, he was not sure anybody had been wounded though the blood indicated somebody had been.

"If he (man in the photograph) had found a bullet, he certainly would have yelled, 'Look, a bullet!' or something like that," Walthers said. "Because a bullet was what we were looking for.""

So, unless there are other interviews with Buddy Walthers that indicate otherwise, it would appear that it's not a correct assumption to say that Walthers HIMSELF ever picked up a bone fragment in Dealey Plaza on 11/22/63. Because Walthers is quite clear in that Waco newspaper article when he said this -- "This city officer and I were standing by watching this man pick up something."

So I'm wondering where the story came from which suggests that Walthers himself actually picked up the bone fragment? ~shrug~

But that inaccuracy (re: Walthers himself handling the object that was picked up) is not nearly as important when compared to what Walthers revealed about the object that was apparently picked up by somebody else in Dealey Plaza. It's clear from Walthers' 1967 statements that the object was surrounded by BLOOD, which would indicate the likelihood that the object being retrieved was a skull (bone) fragment from President Kennedy's head rather than being a bullet of any kind.

But I'm a little puzzled as to why Deputy Walthers would think that finding a chunk of the President's head on the ground could be classified as being "nothing significant". It would seem to me that finding a portion of JFK's head lying in the grass would rise to the level of at least "somewhat significant", wouldn't you think?

But I suppose when compared to finding a BULLET in the grass right after a Presidential assassination attempt, perhaps the discovery of merely finding a piece of skull in the Plaza could be looked upon as being of LESS significance to the police officers who were searching for ballistics type evidence at that time. ~shrug~

Now, the question remains: What happened to that skull fragment? And why wasn't it handed over to somebody for further examination and testing after it was found in Dealey Plaza? Those questions remain unanswered, and can probably never be answered. But from Buddy Walthers' statements that we find in the above Waco article [which is also pictured below], I'm satisfied that if an object was recovered from the grass in Dealey Plaza on November 22, 1963, that object was very likely NOT a "45-caliber bullet", as suggested by Jim Garrison. (And I wonder how Garrison could possibly know exactly what caliber the bullet was? He must have some great eyes.) 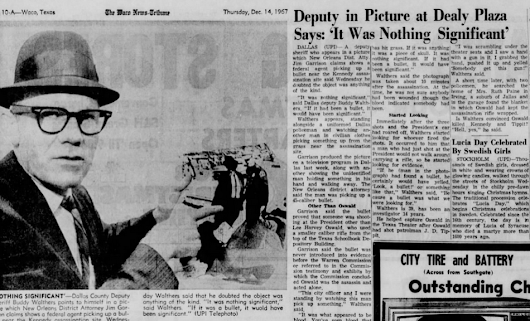 On 12/13/67, and published in the Dallas Morning News the next day, Buddy Walthers flat-out denied that they found a bullet:

Thanks very much, Gary.

Mr. LIEBELER -- There has also been a story, some sort of story that you were supposed to have found a spent bullet.

Mr. WALTHERS -- Yes; that's what the story was in this book, and man, I've never made a statement about finding a spent bullet.

Mr. LIEBELER -- And you never found any spent bullet?

Mr. WALTHERS -- No; me and Allan Sweatt 2 or 3 days after the assassination did go back down there and make a pretty diligent search in there all up where that bullet might have hit, thinking that maybe the bullet hit the cement and laid down on some of them beams but we looked all up there and everywhere and I never did find one. I never did in all of my life tell anybody I found a bullet other than where it hit.

“Though [Buddy] Walthers couldn’t have been clearer that he found no bullet in the turf, many conspiracy theorists to this day maintain he did. In the book "Brush with History", author Eric R. Tagg writes that “Buddy Walthers told his partner Alvin Maddox, Jr., Deputy Roger Craig, his wife Dorothy, Inspector Sawyer, and some reporters that a .45 caliber slug was found at that time . . . After a lecture from Sheriff Bill Decker, Walthers later denied to the Warren Commission that a bullet was found” (Tagg, "Brush with History", pp.10–11).

So Walthers told a considerable number of people, but Decker got him to lie and change his story. On its face this is a preposterous story, with people as prominent as Sheriff Decker and Inspector J. Herbert Sawyer of the Dallas Police Department in a conspiracy to cover up the facts of the assassination.

And there is no corroboration of Tagg’s assertion, for which he offers no citations. Both Craig and Sawyer testified before the Warren Commission, and neither indicated any knowledge of a fourth bullet being found. Craig merely said that ten or twelve minutes after the shooting “Lemmy Lewis or Buddy Walthers” told him in Dealey Plaza “that one of the bullets had ricocheted off the south curb of Elm Street,” not that any bullet was found. (6 H 265, WCT Roger D. Craig) And this was way before Sheriff Bill Decker would have had any chance to tell Walthers to say he hadn’t found a bullet.” -- Vincent Bugliosi; Page 310 of Endnotes in "Reclaiming History"