RICHARD HELMS
AND THE CIA


The audio player below contains highlights taken from the House Select Committee on Assassinations (HSCA) testimony of former CIA Director Richard Helms in September of 1978.

And after listening to the portions of these excerpts relating to the CIA's treatment of alleged Soviet defector Yuri Nosenko, it kind of makes an American like me ashamed to be living in a country that has as one its top-level Government agencies an organization that deems it acceptable to engage in such unlawful activities.

Anyway, this is fascinating stuff. Mr. Helms seems to be in full-fledged "CYA" mode here, which makes for a very interesting HSCA session. Plus, the fact that Helms was obviously sick to death of having an accusing finger of guilt of some kind pointed at his Central Intelligence Agency with respect to the JFK assassination adds to Helms' irritation and to my complete enjoyment when listening to these audio excerpts that I extracted from Helms' complete 5.5-hour HSCA session.

A side note concerning another part of Mr. Helms' testimony....

When Helms was asked by HSCA counsel why he didn't tell the Warren Commission about the CIA/Mafia plots to attempt to assassinate Cuban President Fidel Castro, I kept wondering why Mr. Helms didn't offer up what I would consider to be the best possible answer he could have provided to the Select Committee regarding that question (whether Helms was in a "CYA" mode or not) --- Why didn't he say something along these lines?....

"Well, sir, since I knew that Mr. Allen W. Dulles was one of the seven members of the Warren Commission, and since Mr. Dulles was the Director of the Central Intelligence Agency during much of the time when the CIA/Mafia plots against Castro were being considered and planned, then I naturally assumed that Mr. Dulles himself had already informed the other Warren Commission members about those covert assassination plots against the Cuban leader."

But Mr. Helms didn't offer up the above explanation at all. And I'm still wondering why not. ~shrug~ 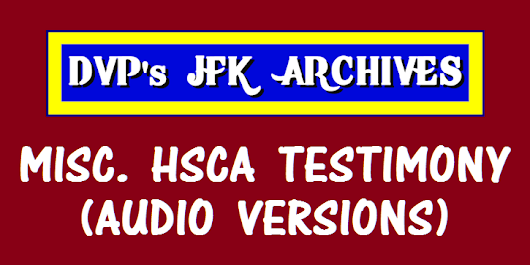