Why not show the actual mail-in coupon [for the revolver], Dave?

I did, Jim. Maybe you missed this post, where I not only linked to CE790, but I also show the composite picture below. I'll ask you, Jim: Notice any similarities in the words "Dallas, Texas" here?: 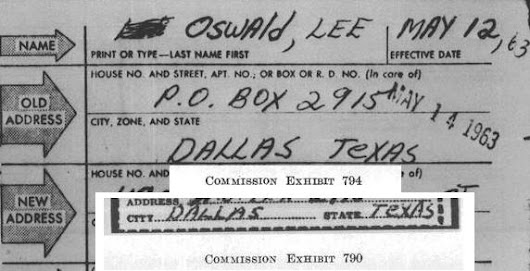 You just got taken to the cleaners on this issue and you want everyone to forget about it.

You made up every excuse in the book for there not being any signed receipt, initialed paper, or bank transaction.

You even postulated one of the dumbest scenarios I ever saw, ie. the post office was a fiduciary for REA! Ridiculous. And you still couldn't make it work.

You then completely reversed yourself on it, and you can't make that work either.

I was only going by what Heinz Michaelis testified to--and that was that THE GUN ITSELF was mailed to THE POST OFFICE BOX. That's what his testimony says. And even the Warren Commission seemed to be confused by Michaelis' testimony in this regard, as even you pointed out by bringing up WCR Page 174.

And Jimmy D. will conveniently forget (or ignore) these words that I wrote in a previous post, which I wrote 2 to 3 days before getting what I deem to be the final word on this matter, via Dale Myers' 8/5/10 blog post:

"I suppose it's possible that I'm wrong about how these types of "COD" transactions worked when companies shipped merchandise to P.O. Boxes, but if the PHYSICAL ITEM itself was actually shipped to P.O. Box 2915 (and Heinz Michaelis said it was in his WC testimony), then it means that the post office employees would be initially handling the money from Oswald (since, quite obviously, Oswald didn't set up camp and live right there inside his post office box as he waited for the delivery truck to show up with his pistol). But, then too, only conspiracy theorists actually believe that all of this chaff about the REA paperwork is the slightest bit important. Reasonable people, however, can easily determine that Lee Harvey Oswald received revolver #V510210 from Seaport Traders in March 1963 and he killed Officer J.D. Tippit with that gun on 11/22/63 (regardless of any paperwork and red tape that might be missing from the official records of the Railway Express Agency)." -- DVP; August 3, 2010

If you believe Gerald Hill. Many of us, due to the man's record, plus his famous fast frisk confession, plus his magic in making both the Tippit automatic shells and the shells signed by Poe disappear, do not. Easily one of the most corrupt cops on a corrupt force.

Of course, Jim. Of course. All the cops were out to frame your favorite patsy named Lee. (Or was it "Harvey" they were framing that day? With you CTers, it's hard to tell which hunk of silliness you're going to go chasing after next.)

As a point of FACT: There were no "automatic" shells to make "disappear" on November 22. Jim's making up evidence out of whole cloth (again).

And Poe's initials were probably never on the two shells that he was given by Domingo Benavides at all:

JOE BALL -- "Did you put any markings on the hulls?"

" "Poe did not mark them," Detective James Leavelle said. "There was no reason to mark them. There is an evidence bag that is marked with the offense number along with your initials. The evidence goes to the crime lab where it is checked and returned to the bag and kept there until trial. I have run hundreds through that way with no trouble and have never been contested on it," says Leavelle. Leavelle continues: "I talked to Poe. He said he didn't remember marking them. But, that is something we didn't do back then." "

Where did Oswald ever admit that that particular revolver was his?

LOL. Does this stupid question REALLY need to be answered?

1.) Oswald fills out an order form from Seaport Traders for one revolver.

2.) Seaport Traders mails a gun with the serial number V510210 to the name and address on the order form FILLED OUT BY OSWALD.

Jim DiEugenio, as usual, wants to pretend that his favorite patsy was totally innocent of shooting anyone on November 22nd. Unfortunately for Jim, however, the actual evidence in the case is making him look like a fool in this "innocent patsy" regard.

Davey, did the WC call anyone who worked at the REA office in Dallas to the stand? If not, why not?

Probably because the Warren Commission knew that the question of "How Did LHO Pick Up His Revolver?" was merely a side/peripheral matter (at best).

Only in the world of "Anybody But Oswald" conspiracy mongers is such trivial information the slightest bit important. But to reasonable people--no.

Yes, Steve, the two items I mentioned above are, indeed, trivial when it comes to the Tippit case.

The two trivial items (questions) being:

1.) Where did Oswald pick up his S&W revolver--the post office or the Railway Express office?

2.) Where did Oswald get the bullets for his S&W revolver?

We do not need to know the answer to the above two questions in order to solve the Tippit murder (and in order to figure out that Lee Oswald was guilty of that murder).

If Ruby hadn't shot him, you would have been waiting outside with a rope and a posse of L/N's. Innocent until PROVEN guilty beyond a reasonable doubt. I would bet money you own a white Stetson.

Why not try following the ACTUAL EVIDENCE in the case to where it leads sometime, instead of following the pack of Anybody-But-Oswald evidence manglers?

And if there was ever a case where the ACTUAL EVIDENCE has been mangled and misrepresented beyond all tolerance by conspiracy theorists, it's certainly the JFK/Tippit case.

Heavens to Murgatroyd--some people in this forum are actually suggesting Oswald never sent in EITHER one of his order forms for the rifle and revolver!

The people who suggest such a ridiculous thing must certainly realize that they have to say that KLEIN'S in Chicago is "in" on a plot to frame Oswald too. The CTers who take this stand have no choice BUT to believe the Klein's people are conspirators, because the Klein's records indicate that they received an order from HIDELL in March '63 and they shipped a rifle to HIDELL in March '63.

I wonder how the Warren Commission got William Waldman to tell lie after lie about KLEIN'S OWN RECORDS regarding the sale of Rifle C2766 to HIDELL?

And the same type of allegations of misconduct have to be directed toward Seaport Traders too, because Seaport has records of THEIR OWN that indicate they received a mail order from HIDELL for a revolver and that they mailed Revolver V510210 to HIDELL at OSWALD'S Dallas post office box.

According to these silly conspiracy kooks who think Oswald never even ordered his guns, there is evidently no end to the number of people that the police and/or Warren Commission were able to get to tell lie after lie in their never-ending desire to paint Lee Oswald as the murderer of both JFK and J.D. Tippit.