Many kooky conspiracy theorists think that these pictures (also shown below) depict JFK posing with the people who murdered him.

The two pictures were taken in Newport, Rhode Island, on September 27, 1961, and they show President Kennedy with the newly-appointed Director of the CIA, John McCone, and the man who was fired by JFK as CIA Director, Allen Dulles.

These photos might seem somewhat eerie to many conspiracists who firmly believe, without a speck of proof, that one or both of the men whom President Kennedy is being photographed with in these two images were directly responsible for having JFK killed in Dallas in 1963.

There is certainly no shortage of people who think the CIA killed JFK, with the granddaddy of all conspiracy theorists being one of those people, Mark Lane. 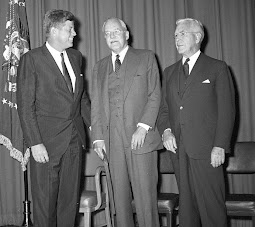 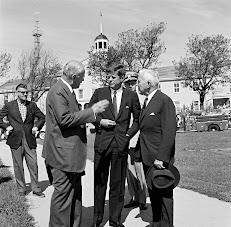 "We know that no one has ever come up with any evidence of any kind that the CIA decided to kill Kennedy, and got Oswald or anyone else to do the job for it. Indeed, despite the admitted problems Kennedy had with the CIA over the Bay of Pigs invasion, William Colby, who was a ranking official in the CIA during the period of the assassination and went on to become CIA director, would later write, "The fact of the matter is that the CIA could not have had a better friend in a President than John F Kennedy. He understood the Agency and used it effectively, exploiting its intellectual abilities to help him analyze a complex world, and its paramilitary and covert political talents to react to it in a low key way."

And in 1996, the CIA released a study titled "Getting to Know the President, CIA Briefings of Presidential Candidates, 1952-1992," by the CIA deputy director for intelligence, John L. Helgerson. .... On the issue so dear to conspiracy theorists—the CIA's alleged animosity for Kennedy, and hence, its motive to kill him—it is very noteworthy that Helgerson's study reported that "the [CIA's] relationship with Kennedy was not only a distinct improvement over the more formal relationship with Eisenhower, but would only rarely be matched in future administrations."

And alluding, by implication, to the strained period with Kennedy following the Bay of Pigs invasion in April of 1961, the report goes onto say that "in November 1961, Allen Dulles had been replaced by John McCone, who served Kennedy as DCI [Director of Central Intelligence] for almost two years. In the early part of this period, McCone succeeded in rebuilding the Agency's relationship with Kennedy. McCone saw Kennedy frequently, and the President—more than any other before or since—would telephone even lower level Agency officers for information or assistance." "