During the Nov. 22 [2009] "Coast to Coast AM" broadcast, two guests on the show, Jim Marrs and John Barbour, who believe there was a conspiracy, pointed to a few problems with the Warren Commission's conclusions that I thought you might address----

1.) The parafin [sic] test on Oswald's face as taken by the Dallas police revealed no powder burns or nitrates, suggesting that he was not in the classic rifleman's position he would have needed to assume when the shots were fired.

This is yet another attempt by conspiracy theorists to exonerate JFK's killer, Lee Harvey Oswald, with the conspiracy quacks insisting that because Oswald didn't have nitrates on his cheek he could not possibly have fired a rifle on November 22nd.

But such a conclusion is total nonsense, and surely people like Marrs and Barbour know it's nonsense too, because the FBI performed a test on Oswald's rifle, with an FBI agent firing shots with Rifle C2766. The end result of this test was that the FBI agent (after firing shots from LHO's Carcano) had NO NITRATES on either his hands or his cheek, proving that the LACK of nitrates on a person's cheek after a paraffin test is not conclusive evidence that the person did NOT fire a rifle.

End of story there (except for conspiracy kooks who want to totally ignore that FBI test). 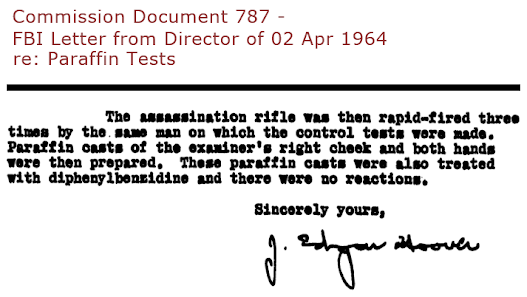 2.) Three shell casings were found on the sixth floor windowsill in the Book Depository Bldg., inches apart from one another, when, according to these guests, the casings would have flown over Oswald's right shoulder if he was firing the shots with a Mannlicher-Carcano rifle.

Yet another conspiracy myth that continues to surface, year after year. (Sickening, isn't it?)

The "inches apart from one another" crap comes from Deputy Sheriff Roger D. Craig (a known and proven liar regarding several aspects of the JFK case).

The bullet shells most certainly were not lying on the floor "only inches apart" from one another. That's ridiculous on its face, because such a configuration of the shells would certainly scream out "FRAUDULENT EVIDENCE" to anyone who would see the shells in such an obviously rigged condition.

This official DPD photo shows the shells as they were when police officers discovered the Sniper's Nest on 11/22/63, and the shells are scattered and are not just "inches apart" and they are not "pointing in the same direction" as Big Fat Liar Roger Craig said years later: 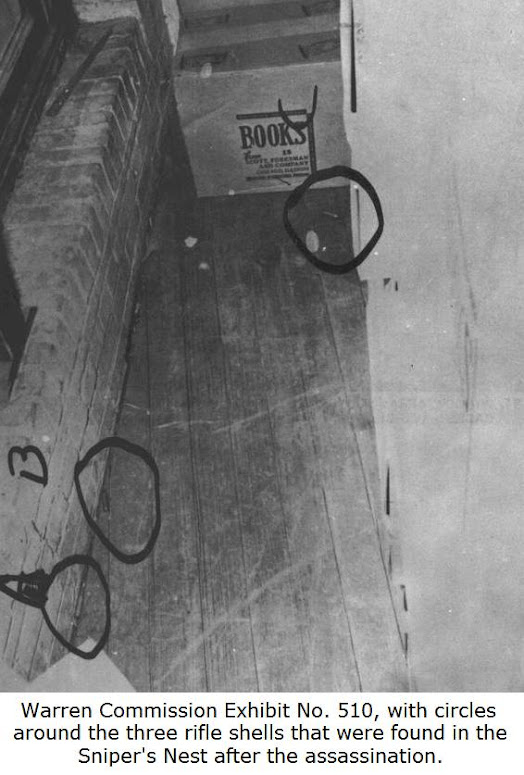 3.) Before the Warren Commission could see the Dallas police files, the FBI took possession of them, and could've altered them in any number of ways before the Commission had a chance to review them.

This is just more speculation and accusations of FBI misconduct coming from the mouths of conspiracists who are more than eager to label anyone "official" who was connected with the JFK case as a "liar" or a "crook", etc.

But, in reality, the unfounded and never-proven allegations spouted endlessly by conspiracy-happy individuals like Jim Marrs and John Barbour couldn't possibly matter less in the long run.

Whenever a conspiracy nut comes up against a piece of evidence he doesn't like (e.g., just about ANYTHING that points to Sweet Patsy Lee Oswald), the conspiracy nut will almost always resort to attacking the credibility of the authorities (such as the FBI, the DPD, the Warren Commission, LBJ, the HSCA, etc., etc. to infinity). It's pathetic.

4.) The results of a surveyor's report on Dealey Plaza showed that there was no clear line of fire from the sixth floor of the Depository Building, but this and other findings were changed before the Warren Commission could see them. The guests said this rules out any computer analyses made since that time about the trajectory of the shots.

I guess Marrs and Barbour want to conveniently forget (or totally dismiss as junk) the detailed re-creation of the assassination that was conducted BY THE WARREN COMMISSION ITSELF (with help from the FBI and the Secret Service) on May 24, 1964.

That May '64 re-creation clearly indicates that not only was there a "clear line of fire" from Oswald's sixth-floor perch in the Texas School Book Depository (as can be seen in CE895 and CE896)....but the May '64 re-creation done by the Commission also demonstrates the workability and feasibility of the Single-Bullet Theory as well.

5.) LBJ was worried that Atty. General Robert Kennedy was about to uncover revelations that could've sent him to prison.

Jim Marrs and John Barbour should get a new hobby. Because the one they are currently engaged in (i.e., attempting to find a hidden conspiracy connected to the murder of President Kennedy) is embarrassing the hell out of them.