You must be very familiar with all the rumors about Dorothy Kilgallen's death, given your interest in the JFK assassination. I'm not well versed, but my feeling from what I've read is that there wasn't a connection. Thoughts?

Being a believer, as I am, in Lee Harvey Oswald's lone guilt in the murder of President Kennedy, I do not believe for one second that Dorothy Kilgallen was rubbed out by evil forces in November of 1965.

That's just one of hundreds of false stories and myths that have been propagated in the wake of JFK's death. And virtually every one of those myths has been thoroughly debunked since 1963.

I am not as well schooled in the "Kilgallen/Jack Ruby/JFK Assassination" alleged connections as some other people who have studied the JFK murder case,
but we can see by just glancing at some of the comments that you get on
your "What's My Line?" videos that a whole lot of people considered Ms. Kilgallen to be a bit of a heavy drinker at times (to put it kindly).

And if Dorothy took any kind of drugs (prescription or otherwise), as was verified she did on the night of her death, I can easily envision a situation cropping up that could result in Kilgallen's accidental death by mixing those two potentially lethal things together -- alcohol and drugs -- without having to resort to crazy off-the-wall rumors about henchmen murdering Dorothy by injecting her with lethal doses of drugs, etc.

Some people have also claimed that Dorothy was about to "break the JFK conspiracy wide open" by way of a private interview with Oswald's killer, Jack Ruby. But there is no evidence that Dorothy had (or was about to garner) any "new" and revelatory evidence (or confession) out of Jack Ruby.

Ruby's known actions and movements on the day he murdered Lee Harvey Oswald, in fact, leave no room for conspiracy whatsoever--except in the minds of conspiracy theorists who think that "happenstance" and "good timing" MUST indicate a "Mob hit" on Oswald in Dallas. But I can show otherwise--and I do, in my articles about Jack Ruby HERE and HERE. 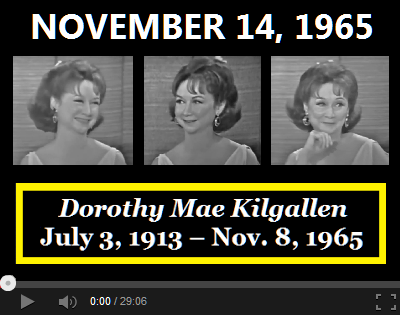 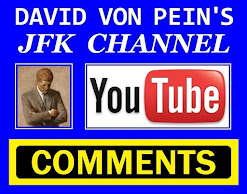