Three assistant counsel members of the President's Commission on the Assassination of President Kennedy (Joseph Ball, Wesley Liebeler, and Albert Jenner) participated in the radio call-in program that can be heard below.

This broadcast was first aired on San Francisco's KCBS-Radio on November 7, 1966, which was a little more than two years after the Warren Commission published its final report on the assassination.

The program's content is, in my opinion, a huge breath of fresh air amid a sea of conspiracy-flavored speculation concerning the murder of John F. Kennedy.

Liebeler, Ball, and Jenner provide hard facts, raw evidence, and a whole lot of ordinary common sense, which are, of course, the very things that led their Commission to the conclusion that it ultimately reached in late 1964 -- namely that Lee Harvey Oswald (alone) shot and killed President Kennedy on November 22, 1963.

It's also rather interesting to take note of the various conspiracy theories that are discussed in this 1966 radio broadcast, and to also note that many of those same unsupported theories are still being embraced as the truth by many conspiracy theorists today.

The host of this KCBS radio show is Harv Morgan. 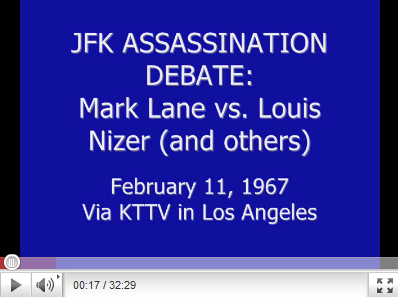