THE BACK OF PRESIDENT KENNEDY'S HEAD
(PART 15)

>>> "I'd like to know if you can see [in this picture] (near where the red line from the ruler leads to...also in the blow-up) what appears to be a somewhat circular shaped feature/defect/whatever?? <<<

To answer your question -- Yes, of course. I do, indeed, see a circular shape there.

>>> "Here's what you said (actually what you asked me) that put me on the right track after I was not seeing, for about seven or eight years, the "forest for the trees" (like everyone else over the past four decades who was trying to resolve these issues): You asked me (paraphrasing now) to explain why the entry in the BOH photo was several (5-6?) inches above JFK's hairline when one's EOP is typically only about 2-2.5 inches above one's hairline? I doubt you'll recall, but unlike me, I didn't respond for quite a while....because I was taken aback by your great question...which is one a whole lot of others trying to resolve these conflicts should have been asking and/or addressing literally decades ago. I was actually disappointed in myself that I didn't see, for myself, the problem with the arguments of the low-entry advocates that you were so observant about and happy to point out." <<<

The above question that you said I asked you some years ago is one that I cannot seem to find in my multi-part "BOH" series that I have archived on one of my websites. If you could locate and post the original question that I asked, I'd very much like to see it.

However, that question does, indeed, sound very familiar and similar to something I mentioned in one of our discussions, which I did locate in Part 6 of our "BOH" series on April 1, 2009. Here's what I said at that time:

"Amazingly, John Canal must actually think that in some crazy and magical way, the so-called "stretching" of John Kennedy's scalp (which John insists is taking place to the scalp in the [autopsy] picture [showing the red spot on the back of JFK's head]) somehow resulted in an EOP entry hole FALSELY APPEARING TO MERGE WITH THE COWLICK (and the cowlick, of course, is located HIGH on a person's head). David Copperfield would be proud. Because even HE probably couldn't pull off that incredible feat of having an EOP entry hole climb up the back of a person's cranium and somehow look as though that bullet hole was PENETRATING THE COWLICK AREA of a person's head." -- DVP

>>> "What happened on 11-22-63 at Bethesda...is that they needed to stretch the rear scalp to cover the large top/right/front area where the scalp and bone had been blown out from...IN PREPARATION FOR AN OPEN CASKET FUNERAL...and that's exactly what they did. There was nothing sinister about this....it wasn't part of any cover-up." <<<

So you think they would have wanted to stretch President Kennedy's scalp to the Nth degree, instead of using some kind of plaster and/or fake hair/scalp that morticians undoubtedly utilize all the time to "repair" damage to a dead person's head? Correct?

But, then too, it seems to me that that kind of extended stretching of the scalp would have produced a final result of having JFK appearing to have a cowlick at the very TIP-TOP part of his head. Wouldn't that have looked much sillier than having some kind of fake hair and scalp being put over the large wound in the skull?

I'm not sure exactly what the head would have looked like to an observer during an open-casket funeral under the "stretched scalp" conditions that you describe, John, but in my mind, I think JFK would have looked awfully goofy with a "cowlick" being stretched way up to the top-right-front part of his head.

Plus: You've got a serious problem with your theory from this additional point-of-view:

After the initial scare of "World War 3" had died down (which is a "scare" that many people believe was the cause for some degree of cover-up regarding the evidence in the JFK case), why in the world wouldn't the autopsy doctors (Humes, Boswell, and Finck) have eventually COME CLEAN with the whole truth concerning this "stretched scalp" business that you think occurred at Bethesda?

Humes, Boswell, and Finck all testified at various times in front of the Warren Commission and the HSCA and the ARRB (and Finck also testified at the Clay Shaw trial in 1969), and in all of that testimony--which is testimony that occurred well AFTER anyone would have been scared to death about bombs being dropped on their homes by the Soviet Union--there isn't a single thing mentioned by ANY of those three autopsy surgeons about the scalp being stretched (particularly Dr. Humes, who we know assisted Tom Robinson in preparing JFK's body following completion of the autopsy).

So, John, were those THREE autopsy physicians so amazingly UNIFIED in their desire to keep silent about the stretched scalp that they were all willing to take such a secret to their graves?

Or do you even think Drs. Boswell and Finck knew about the stretching of JFK's scalp at all?

Let me also add these tidbits for additional consideration:

On March 12, 1978, the HSCA tape recorded an interview with Dr. Pierre Finck. And during that interview, Dr. Baden of the HSCA's Forensic Pathology Panel talks about how the "cowlick" location of the bullet entry wound in JFK's head "lays right over" the entry hole in Kennedy's skull as seen on an X-ray of the President's head [the interview can be heard HERE].

Now, after being confronted by Dr. Baden about these discrepancies concerning the location of the entry wound, wouldn't you think that Dr. Finck would have spoken up at that point and explained to Baden and company about the fact that the scalp had been stretched? Or, to ask again, are you of the opinion that Dr. Finck was completely ignorant of the "stretching" procedure? He never even learned about it from Humes? Was he kept completely in the dark about this so-called "stretching" of the scalp?

And why was Dr. Humes so willing to stay quiet about the stretching--even when he was, in effect, being attacked and skewered when he testified in front of both the HSCA and the ARRB?

And then there are the Parkland witnesses:

You're claiming, John, that there was only a small "tear" in the right-rear (occipital) portion of JFK's scalp, which is a tear that you say was stitched up before the red-spot picture was taken, and (amazingly) not a HINT of this "stitching" is evident in the photograph.

I, of course, firmly believe that the Parkland witnesses (and, yes, some of the Bethesda witnesses too) were wrong. They did not and could not have seen a great-big hole in the right-rear of JFK's head on November 22nd, because the SCALP of the President is completely INTACT in the photographs. And the X-rays fully corroborate the photos as well. There was NO LARGE DEFICIT at the right-rear of President Kennedy's head.

And, in my view, those photos and X-rays (in tandem) are, indeed, by far the best evidence when it comes to trying to resolve this issue concerning the President's head wounds.

And let me also ask you this final question, John:

If JFK's scalp is being stretched by up to four inches, then why doesn't Kennedy's head (on the whole) look distorted in some manner in this "red spot" BOH picture below?: 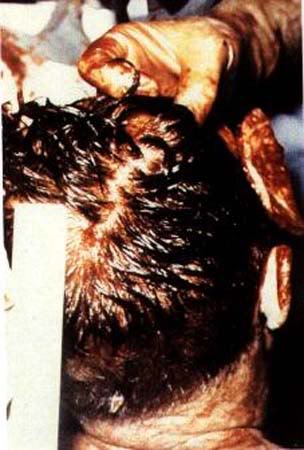 Via your "stretched scalp" theory, wouldn't it stand to reason that the parts of President Kennedy's head that AREN'T being stretched would look sort of out of place when compared to just the portion of his scalp which is being seriously manipulated by up to four whole inches in that picture?