No. An FBI agent. Get it right, kook.

And when did I ever say it was?


>>> "I admit it was the first big TV news event. But since the assassination was not recorded on TV live, since the press bus was out of sight, it made no difference." <<<

Per this kook, apparently since the press bus was near the end of the
motorcade line, it must have meant that a dozen gunmen could have been
popping away with 35 to 50 bullets in Dealey Plaza and it would have
(per the above kook) "made no difference".

I guess all of those additional shots (anything above the number "3")
would have somehow been inaudible to the many news reporters and
cameramen in the three camera cars (and elsewhere in Dealey Plaza) who
immediately reported what they heard to the world on live television and
radio.

Gosh, these kooks are crazy. Too funny.


>>> "Kennedy was hit in the head twice, one from the front entered his right temple, and one from behind hit him slightly above the occitpial [sic] external protuberance." <<<

Why wasn't the LEFT side of JFK's head damaged at all then, Mr. Kook? 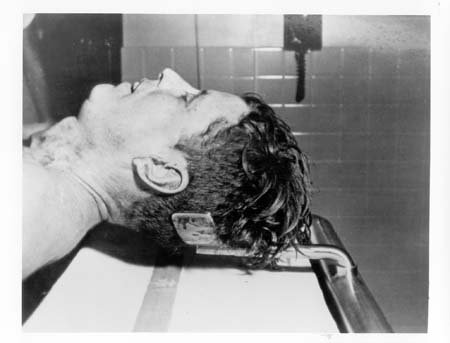 What stopped this bullet from exiting? And where did the bullet go? If
it "did not exit", it would have certainly been found after the shooting.

What stopped this bullet from exiting? And where did the bullet go? If
it "did not exit", it would have certainly been found after the shooting.

BTW, you're a Super-Kook for believing that THREE separate bullets
could have possibly had a sliver of a chance of mirroring a perfect
SINGLE-bullet event.

And then, per you kooks, ALL THREE BULLETS DISAPPEAR.

Do any rabid CT-Kooks have ANY common sense? Any at all?

But, I guess there's a positive side to being a conspiracy-loving
idiot -- because by being one of those, you don't have to worry about
"evidence".

The kooks can simply use their "Everything Was Faked" motto and then
they can make something up (like a three-bullet substitute to the SBT,
with all bullets magically vanishing off the planet), and all kooks in
Kookville are happy and contented.

Must be nice to be a conspiracy-spouting kook, huh?

"Our own view on the evidence is that it is difficult to believe the Single-Bullet Theory. But, to believe the other theories is even MORE difficult. If the Governor's wounds were caused by a separate bullet, then we must believe that a bullet passed through the President's neck, emerged at high velocity on a course that was taking it directly into the middle of the automobile, and then vanished without a trace.

"Or, we can complicate matters even further--as some do--by adding a second assassin, who fires almost simultaneously with Oswald and whose bullet travels miraculously a trajectory identical with Oswald's and that second assassin, too, vanishes without a trace.

"Difficult to believe as the Single-Bullet Theory may be, it seems to be the LEAST difficult of all those that are available.

"In the end, like the Commission, we are persuaded that a single bullet wounded both President Kennedy and Governor Connally."