It's not in "doubt" in any way at all. Even most CTers will readily
admit that CE567/569 were linked to Rifle #C2766 "to the exclusion".
Same with the 3 bullet shells found in the Sniper's Nest.

Why you keep saying this evidence is in doubt is anybody's guess. But
my guess is: it's because you're an evidence-ignoring moron.


>>> "My question was if they came from two seperate [sic] bullets, which ones did they come from? Answer the question." <<<

Bullet fragments CE567 and CE569 didn't come from two separate
bullets, you idiot. They came from the one bullet that hit JFK in the
head, which is a bullet that came out of Lee Harvey Oswald's
Mannlicher-Carcano rifle.


>>> "It wasn't obvious to Frazier and Nicol (and most definitely the other two "experts" left out of the report in name [i.e., Cunningham & Killion], so why is so obvious to you?" <<<

Of course it was obvious to Frazier, Nicol, Cunningham, and Killion.
But, quite obviously, since the bullet was split into TWO SEPARATE
PARTS, the FBI and Nicol couldn't come right out and say with 100%
finality that CE567 & 569 were positively from the very same bullet.

But Frazier, et al, like anyone else with an ounce of common sense,
knew that those fragments were almost certainly from the same bullet.

The crazy notion that a matching portion of EACH of the two fragments
went AWOL, with no overlapping parts on either 567 or 569, is just
plain fairy-tale time. But, being a kook, you feel you have to go with
the fairy tale evidently.

"There is not enough of the two fragments [CE567 & CE569] in unmutilated condition to determine whether or not the fragments actually fit together. However, it was determined that there is no area on one fragment, such as 567, which would overlap a corresponding area on the base section of 569, so that they could be parts of one bullet, and then, of course, they could be parts of separate bullets." -- Robert A. Frazier; 1964 Warren Commission testimony


>>> "How do we know this (one bullet hitting JFK's head)? Again, how do you know this for sure? But the bullet supposedly used was a full-metal jacketed bullet that is designed not to fragment, just like the miracle bullet. Why did it here?" <<<

Or: just look at this image below (and the accompanying text), which
vividly shows what happens to a Mannlicher-Carcano, 6.5-millimeter,
FMJ, Western Cartridge Company bullet after it hits a human skull
travelling at full velocity. (This is just something else for the CT-
Kooks to totally ignore, I would imagine.)..... 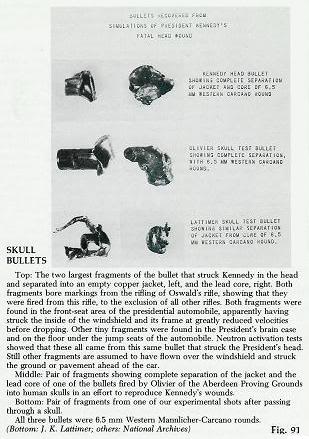