"WELL, THEY SAY IT JUST
TAKES A SECOND TO DIE" 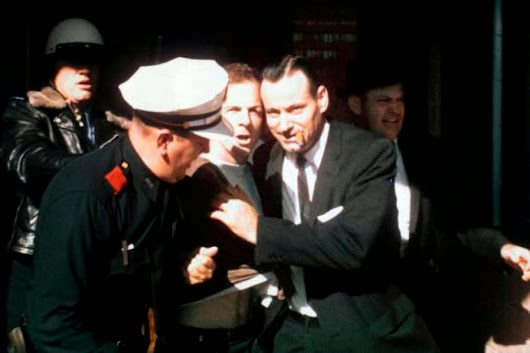 LEE HARVEY OSWALD -- "What is this all about? I know my rights. .... Police officer been killed? I hear they burn for murder."

LEE HARVEY OSWALD -- "Well, they say it just takes a second to die."

A 24-year-old ex-Marine and ex-defector to Russia by the name of Lee Harvey Oswald was arrested on Friday afternoon, November 22, 1963, during a struggle with police officers within the Texas Theater on Jefferson Boulevard in Oak Cliff, a suburb of Dallas, Texas, USA.

Oswald, just prior to his arrest, had shot and killed two human beings a short distance from the movie theater where he was caught. He murdered a 39-year-old Dallas police patrolman by the name J.D. Tippit .... and Oswald, shortly before killing Mr. Tippit, shot to death the President of the United States, 46-year-old John Fitzgerald Kennedy.

Regarding Oswald's arrest, the following very interesting Warren Commission testimony was given by a Dallas Police Department Officer named C.T. Walker (who helped subdue and apprehend Oswald in the Texas Theater). And, in my view, it says quite a bit about Oswald and his "guilt vs. innocence" in the Tippit murder:

"Oswald said, 'What is this all about?'; he was relating this all the time. He said, 'I know my rights'. And we told him that he was under arrest because he was suspected in the murder of a police officer. And he said, 'Police officer been killed?'; and nobody said nothing. He said, 'I hear they burn for murder'. And I said, 'You might find out'. And he said, 'Well, they say it just takes a second to die'." -- Dallas Police Officer C.T. Walker; April 3, 1964

Plus -- Officer Walker testified to Oswald's very calm and unexcited demeanor after his arrest; and how he didn't seem "scared" in the slightest:

Now, let me ask any reasonable individual this: If you had just been arrested for killing a police officer -- and you DIDN'T do it -- wouldn't you tend to be a bit scared or nervous (or climbing the walls with fear, I would imagine)?

Oswald's non-scared manner is perfectly consistent with his guilt. Plus, Oswald's calm demeanor comes right AFTER he's been told by a policeman that he just might find out what it's like to "burn for murder" -- a murder Oswald supposedly (per many conspiracists and per Oswald's own lying mouth as well) never committed.

Plus: C.T. Walker's testimony only verifies even more how Oswald's later comment to the press was obviously a big fat lie .... that comment being: "They've taken me in because of the fact that I lived in the Soviet Union" (which was said by Oswald just prior to spouting his now-famous "I'M JUST A PATSY!" line of dialogue).

By way of Officer Walker's testimony ("we told him that he was under arrest because he was suspected in the murder of a police officer"), we know that Oswald, within minutes of his arrest, was told exactly why he was "taken in".

And via the excellent 1998 book entitled "With Malice" (written and impeccably researched by Dale K. Myers), Oswald's "guilty" status with respect to the Tippit crime is forever sealed in concrete.